Before something like Hurricane Harvey, who could’ve imagined the kind of destruction that would literally immobilize a major U.S. metropolitan area for what could potentially be weeks if not months? As this writing we’re 72 hours into the aftermath of this major disaster and supplies are already running low.

Amid the images of loss and destruction, hurricane survivors know they must restock provisions to prepare for another week or more of sheltering in place. Now, imagine 6.2 million people trying to stock up at the same time. Panic buying is gripping the affected area and beginning to overload local and regional communities. Ahead of the hurricane making landfall the vast majority of people simply figured that the aftermath would, at most, last a few days. No one ever contemplated that real possibility that this scenario would be the end result or believed they would have to evacuate after the storm hit.

In fact, many have evacuated the city and moved to other Texas towns and now those areas are beginning to exhaust supplies as well. In any disaster, when the needs of the people are strained, frustration can quickly descend into a breakdown. While this is something no one wants to see happen, with a disaster such as this one, it is very easy to see how it can overwhelm government emergency response plans.

In an article explaining the breakdowns that occur after disasters, it was written, “When the needs of the population cannot be met in an allotted time frame, a phenomenon occurs and the mindset shifts in people. They begin to act without thinking and respond to changes in their environment in an emotionally based manner, thus leading to chaos, instability and a breakdown in our social paradigm.”

This is what is to be expected when so many people are hit with a rapid, far from equilibrium event. Keeping up with the desperate and immediate demands of hundreds of thousands of people will undoubtedly be a challenge in and of itself and supply trucks can only do so much, especially with flood water still standing on highway systems. Those living in this aftermath have a long road ahead of them, and knowing which items disappear off the shelves first can help them better prepare and stay on top of their personal supplies.

Just 72 hours after this disaster, here are the five supplies that have become difficult or impossible to find. 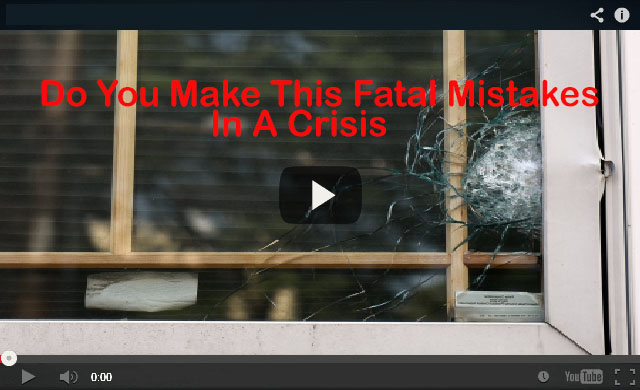 Concerns over closed refineries and disrupted pipelines erupted into a full-blown panic run on gasoline across Texas cities. Here’s the crazy thing, the shortages are not just happening in the greater Houston area, but two hundred miles north in Dallas, as well as in the cities of Austin and San Antonio, TX. This panic for gas is so insane that we are seeing gas lines that have been likened to the 1970’s.

While state officials are saying, “there is no need to worry,” things are getting real in Texas and whether they want to admit, the situation is beginning to get heated. So much so that reports of fist fights for fuel are popping up.

Clean drinking water, the main staple in any disaster supply, is quickly being purchased faster than they can restock it. If hurricane victims do not have a high-quality water filter, they have to take their chances finding a store that has been restocked. In the flood ravaged areas, critical infrastructure has been damaged making it difficult for trucks to resupply the affected area, thus adding to the panic buying. Desperate residents do not know when this disaster area will normalize, so they want to grab supplies when they can to ensure their family has what they need.

In the city of Beaumont, things have become dire since the city shut off the municipal water supply, leaving 100,000 people with no other option but to hunt for water in surrounding areas. As well, the local hospital had to close its doors out of fear of water contamination, one of many immediate post-disaster threats we discussed in a previous article.

Meanwhile, earlier Thursday, residents lined up at stores hours before they opened in hopes of getting whatever bottled water they could find. 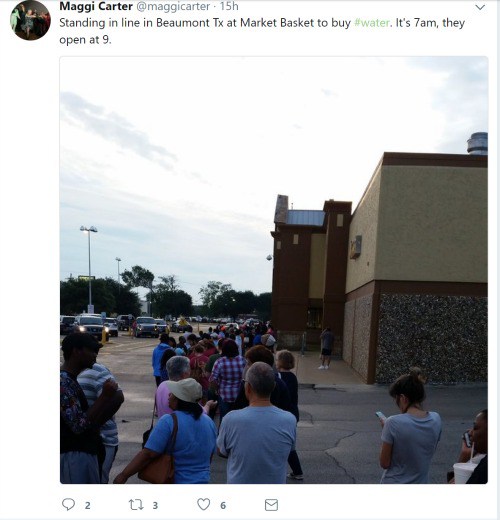 “It’s crazy,” said Khayvin Williams, who started waiting in line at Market Basket at 6:50 a.m. “People are freaking out.”

At a local Wal-Mart, Jeffrey Farley said the store was only allowing 20 people in at a time and was rationing water to three cases per customer. He got in line at 6:30 a.m. and waited until 8:30 to get his water.

And that is what we are seeing now. Food staples like milk, bread, and eggs are all in high demand. Lines are forming outside of stores that are open to the public and these essential items run out fast.  In fact, grocery stores are putting limits on how much you can buy. In this report, one store manager in the area admits to the food limits. “Yeah, there’s limits,” Luis Castillo, a store employee who was working crowd control Tuesday, told BuzzFeed News. “But we already ran out of bread. There’s no more bread.” While many grocery stores and superstores like Wal-Mart and Target are opening more stores every day, at the given moment, it’s a race to resupply and stores can quickly be exhausted of food necessities.

Food staple shortages are also being reported in north Texas – 200 miles away from Houston. 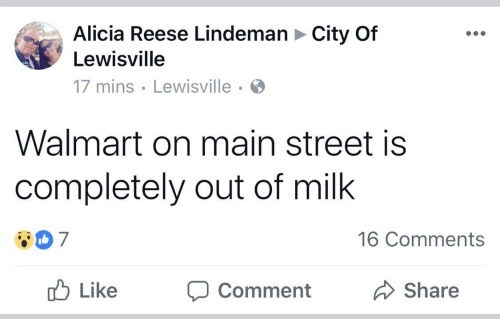 Roni Neff, a professor of Environmental Health and Engineering at Johns Hopkins University is concerned about those not able to get to the stores. “In Houston, as everywhere, the impacts are not equally felt,” she says. “People with lower incomes, people who are elderly, with disabilities, with medically necessary diets, may be particularly hit by this kind of situation, and really have quite severe food security threats to them.” (Source)

Most people may not have even considered this essential post-disaster item.

In the aftermath, bleach and chemical disinfectants are hard to come by. Cleaning flooded homes and questionable water sources are making this a high-demand commodity. Sanitation is one of the most important facets of staying prepared. After a hurricane hits, overloaded sewage systems will start spewing raw sewage. Diseases such as cholera, are contracted through contaminated water and food, and often occur as a result of poor hygiene and sanitation practices.

Hurricane survivors may have grossly underestimated how much toilet paper they needed to ride out the aftermath. Toilet paper is used every day and when it runs out, things can get nasty.

On average, consumers use 8.6 sheets per trip – a total of 57 sheets per day. Multiply that by a week-long storm and a family of 5 and you run out quickly.

Due to the high need for toilet paper, it is flying off the shelves and restocking has obviously become an issue. 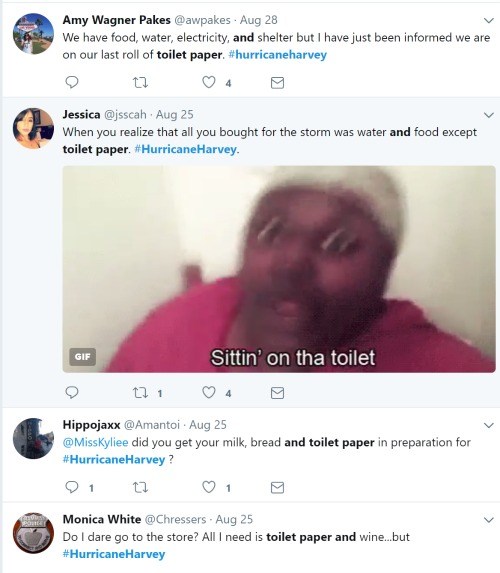 Now that many disaster victims are evacuating the area, stores in north Texas are also seeing a shortage.

The last thing on people’s minds was how massive the clean up from Hurricane Harvey would be. But as we have often noted, hurricanes are unpredictable in nature and this one “threw a wrench” in many preparedness plans.

While thinking about how they were going to clean up after flood waters ravaged their homes wasn’t something anyone really considered beforehand, is it now at the forefront. As a result of the extensive damage, home repair supplies are in desperate need.

Plywood, tools, wheelbarrows, large plastic containers, trash bags, buckets, generators, and other disaster necessities are being purchased. In fact, at Lowe’s, Rick Neudorff, the retailer’s emergency command center operations manager said generators were in such high demand that “some stores are practically selling generators off the back of the truck because people have been waiting in the stores for the generators to arrive.”

The reality is that the vast majority of people have about three days of food and water at home, when a prolonged disaster strikes it upends the stability of the entire system of just-in-time delivery.

This is why using a layered approach to preparedness planning that includes short-term, long-term and worst-case scenario considerations is paramount.

What Hurricane Harvey has taught us is that devastating events, while so improbable that they may happen just once in a hundred years, are still a real and present danger.

Apocalypse Training 101: Learn How to Survive the End of the World

Sources of Tinder and Fire Craft in the Urban Environment