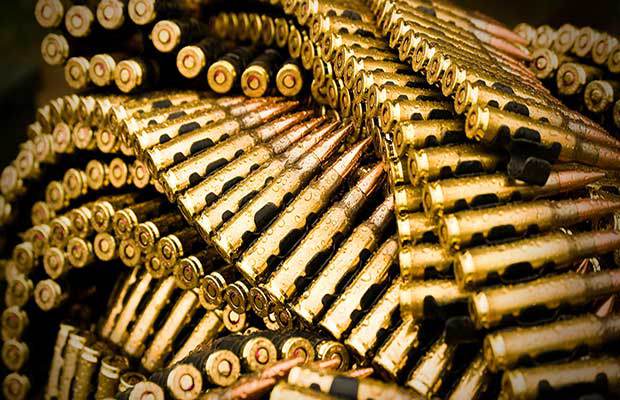 A common question when preppers begin the process of accumulating supplies and knowledge is How much ammo do I need for SHTF? Of course, if you don’t have any firearms, the question is more likely, how much ammo do you need meaning the person like me? Because anyone with a gun in their opinion doesn’t need it and any ammo except maybe a single box is too much. That box should also be registered with the local sheriff and kept under lock and key preferably at the Sheriff’s office.

For the rest of us who are able to keep firearms (for now) and who don’t have a problem with firearms, I wanted to give my take on how much ammo to keep. The typical SHTF scenario is not a limited disruption in services or power like what you can expect from a weather event. Although, there are a lot of cases recently where Hurricanes disrupt a community for years. (Haiti, Hurricane Sandy, Katrina) so to some of you this could be a real SHTF scenario in its own right. I am not really speaking to this threat, but you can glean some information for those who do find themselves in a weather caused event I think.

My scenario for this post is a real SHTF type of scenario where for whatever reason, any resemblance of normalcy has been thrown out the window and there is no Rule of Law or Law and Order is severely diminished. Economic Collapse, Mutant Zombie Bikers from Mars, Global pandemic; pick one. The point I want to get to is if the stores never opened again, if you couldn’t walk down to Walmart ever and get more ammo; how much would you need on hand before the collapse?

Let me first preface this with the following. Everyone’s situation is different so this is just my idea of the recommended minimum amounts. If I haven’t taken into account some of your realities, please let me know. I think this post can be a forum where we can all get more perspective from others out there.

Next, this is not assuming you are going to bug out into the woods. I can already hear people saying “How are you going to carry all of that” and I completely agree that you would never be able to on foot. I am not planning on bugging out; this is my minimums for bugging in. Additionally, there will be people who say things like, what if you get killed and you have all of that ammo? The bad guys are going to get everything you have. True, but I could get killed falling down the steps or eating some bad spaghetti sauce and the bad guys would get it anyway. Any plans I make are for living, not dying. I think it’s stupid to plan for dying. Let the people burying you worry about that.

How Much Do I Need?

So, to get to the point, I mentioned in another post the Top Five Firearms You Need to Get Your Hands on, so that is my battery of arms. This included one Shotgun, One Battle Rife, One Long-Range (Hunting) Rifle, One pistol and One small game rifle. For these weapons, I have the following recommendations.

I will go ahead and explain my reasoning for these numbers and please feel free to comment with your own opinions and suggestions. I am just like every single other person in the world out there. There aren’t any SHTF experts so it is just opinions all around. You may have a lot of experience in the Army, or the Police Force but that doesn’t make you an expert any more than anyone else.

Shotgun – This weapon has two uses so the count is fairly high. 500 rounds each for hunting game and defending your home should last a long time.

Battle Rifle – This to me is your go to weapon of choice in any type of SHTF scenario and your magazines will hold more than just about any normal magazine of any of my other choices. A decent combat load is 12 magazines at 30 rounds each (12 X 30 = 360) and that is just what you can carry on you in your vest or LBE. 2000 to me is the minimum I would strive for.

Long Range Rifle – Again, this pulls double duty along with the Shotgun. A well sighted .30-.06 or .308 can reach out and touch a lot of people at a respectable distance if they are handled correctly. This can be the weapon that bags deer for dinner or picks off a zombie at 600 yards.

Pistol – This weapon is not as powerful as the battle rifle, but it will be on your side more often I imagine. Spare pistol ammo can be bartered in a pinch, but only if you have more than your minimums.

Small Game – This is my .22 and it can be used to practice with, take smaller game and varmints if you are a good shot. This ammo is still considerably cheaper than just about any other too.

Now that I have my minimums out there, how do you get started? I would download our Ammo Inventory Spreadsheet if you have Excel to keep track and budget. If you had all of these calibers and had zero ammo I would try getting a little of everything as your finances allow. Don’t stock up on rifle ammo and forget everything else. Use the spreadsheet to help you plan your shopping trips to the Gun Show or buy online from sellers like our sponsors Crossfire Ammunition or Ammo Club.

What should you do when you have the minimums? You can keep going to further ensure you will have enough or move on to your other preps that you need to check off the list. As long as you have the minimums I would spend my money on other necessities before I add more ammo.

How many magazines do you need for each weapon?

Have some ideas of your own? Id love to hear them in the comments below.

Should You Buy an Air Rifle for Survival?

6 thoughts on “How Much Ammo do I Need for SHTF?”