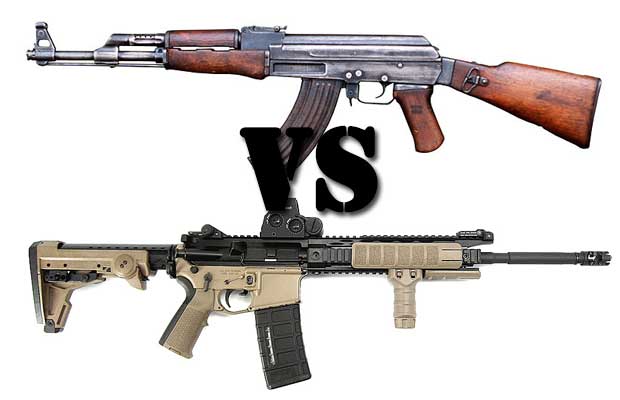 Yes, I am going there. One of the most hotly debated questions in prepper/survival/firearm enthusiast circles is around the best survival rifle. For all intents and purposes, there are only two in competition in the US and those are the AK-47 and the AR-15. I will add that there are variants of both and I am lumping all of those into these two categories. This question of what is the best survival rifle is one that I asked myself when I was considering my first rifle purchase so I wanted to take some time on the Prepper Journal blog today to hash out what I see are the differences and to give you my opinion as to which rifle is better when it comes to the AK-47 vs AR-15.

I know that this subject is insanely controversial, even though it shouldn’t be. It’s the same as getting upset over Ford versus Chevy. If this post makes it to some of the firearms forums out there I know I will have some people who will disparagingly call me an “Internet Expert” implying that I have no idea what I am talking about. So be it. I am not an expert, but I don’t think anyone else is an expert either in this subject. I don’t think anyone out there is more qualified to determine what rifle is best in my opinion, for me, than me. I don’t really care if you are active duty police, 20 year military veteran, or mercenary for hire. This is my opinion based upon my belief and requirements, you are entitled to yours, but that doesn’t mean mine is invalid. It also doesn’t mean you are smarter than anyone else that disagrees with you. It simply means we have different opinions.

Additionally, I will throw out some facts that should be pretty easy to agree on and some opinions based upon my personal experience which may not be. Just because your experience is different, that doesn’t make it a law of science or anything. If you have a different experience, by all means, please comment down below but I would ask you to keep the debate civil as that is what I am going to try to do. If you would like to make your case for the opposite of what I recommend, please do so in the comments and we can all judge whether what you are saying makes sense.

Very briefly, the The AK-47 is a selective-fire, gas-operated rifle that fires 7.62×39mm ammunition. The AK-47 was developed in the Soviet Union by Mikhail Kalashnikov. Design work on the AK-47 began in the last year of World War II (1945).  In 1949, the AK-47 was officially accepted by the Soviet Armed Forces and used by the majority of the member states of the Warsaw Pact. It is still widely used today.

If you are going to count on a rifle, you should know how to take care of it.

The AR-15 was first built by ArmaLite as a small arms rifle for the United States armed forces.Because of financial problems, ArmaLite sold the AR-15 design to Colt who made some modifications and the redesigned rifle was subsequently adopted as the M16 rifle which was the main rifle used by US Armed Forces. Colt then started selling the semi-automatic version of the M16 rifle as the Colt AR-15 for civilian sales in 1963 and the term AR-15 has been used to refer to semiautomatic-only versions of the rifle since then.

For the purpose of this comparison we are only going to be discussing semi-automatic weapons available for purchase in the US by a non FFL carrying person, not their fully automatic counterparts.

You can quickly see some of the facts below about each rifle on this excellent info graphic from TacticalGear.com , but I will list what I see are the important differences between the two rifles.

For more information and my opinion on which rifle is best, please read below the graphic.

There are really only 3 main arguments that proponents of the AK-47 use as their rationale for saying that the AK-47 is the better survival rifle so I want to list and address each below.

Which Rifle is the Best Survival Rifle?

I will tell you that in my opinion, the best rifle is the one you have with you when you need it. That sounds well and good, but if I was going to buy one rifle, and I lived in America, it would be the AR-15. Why? For me this comes down to 4 simple points.

Accuracy – The AR is simply more accurate at further distances than the AK-47. If I wanted to shoot a rifle up in the air when I was mad, riding in the back of a Toyota truck with 20 of my friends, or happy, or just plain stupid then I might get an AK-47. One of my goals is to be able to engage targets at up to 500 yards and the AR-15 does that better than the AK-47. The AK might use a heavier round that will go through more solid objects, but if you are able to kill the person holding the AK 200 yards before he can hit you, does that matter?

Range – Speaking of range, the AR-15 shoots further effectively, so that just adds to what I was saying above. Range is also important to me because I want to be able to take people out as far away as possible. I don’t want you getting so close that your AK-47 can hit me. I would rather you and your AK be far away and I will take care of you way out there. I don’t mind walking out there to pick up your rifle when I am finished.

Parts – The AR-15 is like the Barbie doll of the firearm world. There are so many accessories! And yes, the military version of this rifle (M16/M4) has a majority of parts that are fully compatible with the AR-15. The AR-15 is also the same weapon used by police, DHS, and NASA. If anything bad happens, there should be plenty of opportunity for spare parts to be acquired. I can’t say the same for the AK-47 unless we are invaded by Russia. So, even if your AK is able to fire with some mud in it, what if something breaks? That is why you buy spare parts you say. No, that is why you buy what everyone else is using including our government.

Ammo – Same as above, this is the ammo our police and military use as well as quite a large number of my countrymen, so I have the advantage of a very common caliber in my favor.

OK, that is my rationale and those are my reasons. The AR-15 does cost a little more on average, but you can find really good deals out there if you look and the price difference would be much lower. Does this mean I wouldn’t own an AK-47? No, not at all. I would love to have one, but I do think that for the reasons I listed above, if you can only choose one and you live in the good old US of A, the AR-15 is the better option in my opinion. I know for a fact people will disagree with me, so please let me know what you think in the comments below.

Trick Out A Cheap AR15