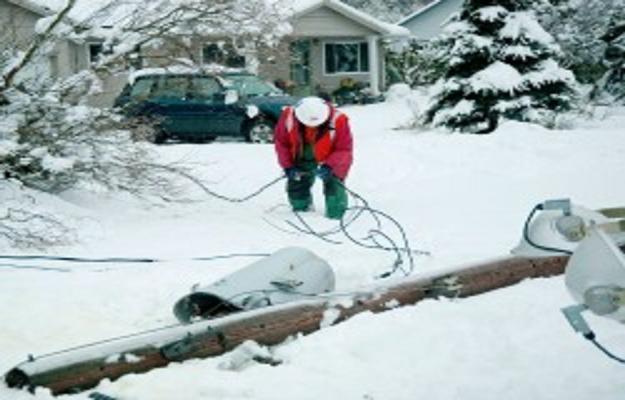 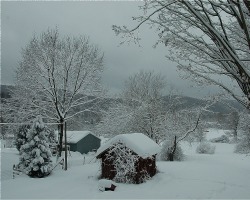 Electricity is the Achilles heel of most people’s lives and preparedness plans.  You don’t realize how much you need or use electricity until it is no longer available.  During Hurricane Katrina, an estimated 1.7 million people lost power anywhere from several days to several weeks.  Want to test your preparedness plans?  Go without electricity for a few days.  I was able to test my plan this year without warning.  We had some crazy weather this fall up in the Northeastern United States.  Just after Halloween, I heard there was going to be a major winter storm hitting the Midcoast Maine area, which happens to be where I live.  No big deal I thought to myself, it will be just a few inches.  Yeah, right.

Now this isn’t the kind of snow that upstate New York got hammered with late in November.  They got something like six feet of snow!!  Anyway, it started snowing on Saturday night and by Sunday morning it was really starting to pile up.  I hadn’t bothered to hook up my snow plow as the last report I heard said no more than three inches.  In front of the plow I had stored a picnic table, chairs, fire ring and a few other items, which were now all covered in about eight inches of heavy wet snow. 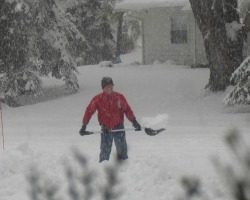 If you live in a snow zone you’ll know what I’m talking about.  This was the coronary inducing kind of snow.  Every shovel-full weighed about fifteen pounds, but it makes fabulous snowmen as my young son and daughter found out.  They were thrilled with the snow and we did manage to get outside for an afternoon of fun and snowball fights.  The snow continued to come down and the wind was blowing pretty hard.  In the dead of winter this isn’t a problem because the ground is frozen and most of the leaves are off the trees.  Unfortunately the trees still had plenty of leaves and the ground was wet and unfrozen.  So what’s the big deal?

When wet snow piles up on tree limbs and leaves it’s heavy.  When the wind blows it will eventually break tree limbs and knock trees over because the ground isn’t stable enough to hold them in place.  When it’s frozen it’s no big deal, but this is the kind of storm that’s a perfect recipe for disaster.  And it delivered.

When the kids and I went back inside the lights flickered off and on a half dozen times until they went off and didn’t come back on.  I was expecting it, so I grabbed my generator and took it out to the small shed I built for it out of pallets and fired it up.  A couple of years ago after a similar storm I had a transfer switch put in, which allows me to hook a generator to the house with a single 200 volt cord.  In the basement next to the main switch box is another one for the generator.  Turn off the main power to the house, start the generator, go down to the basement and flip the switches to the on position and voila!  The house was back up and running.

The generator is a midsized 550 watt rig.  It can run the lights in the house, the pellet stove, water pump (220 volt), freezer and ‘fridge, and a few other small devices like the TV and DVD player.

My wife tried to run the microwave a few times, but it bogged everything down and I told her to give it up.  It would probably have ruined it if she kept trying, so I brought up my propane camp stove and we used that for cooking and warming things up. In addition to the camp stove we had the grill outside, which meant we were in fine shape for cooking.

For the most part the generator runs everything we need in order to be comfortable.  The only downside is that it’s a little noisy and I had to put gas in it about every 12 or 14 hours.  I can’t really complain  because five gallons of gas is not a lot to ask for to have electricity.  I filled it up in the morning and then again at night.

When I filled up the generator, I had to shut it down for about ten minutes so that I would not start a fire if I accidentally spilled gas on the exhaust.  Keep in mind that when I was doing this task, for the most part it was dark, there was about ten inches of snow and the wind was blowing a pretty good clip. 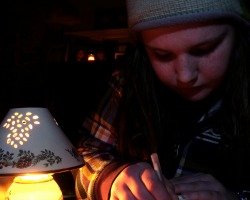 I was relatively satisfied with my storm preparations.  Both vehicles were topped off with gas and I had plenty of water in the basement in case the generator broke down.  I also have a backup propane heater and a kerosene heater standing by as well.  When you have little kids you can’t have too many back up plans.

The one area I fell down on was gas for the generator.  Due to a series of incidents I won’t go into here (involving the wife not checking her gas gauge) we only had one five gallon can of gas on hand.  After I filled up the generator and got the house up and running I threw all the gas cans in the back of my truck and drove down to the gas station where luckily they still had power.  Once I had my twenty gallons of fuel safely stored away I felt we were in a pretty good place and didn’t go out again until after the snow stopped falling. 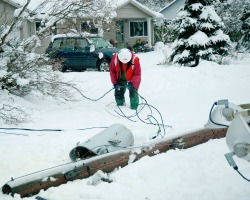 Most everything was closed the next day due to the storm.  They finally plowed the road outside my house and my wife was able to take the kids out for awhile in her minivan.  Later that day we had several families over as they were without power and didn’t have generators.  They were quite grateful to have a place to hang out for a few hours and nobody complained about the generator droning away in the background.  My parents came over Monday night and stayed with us as they didn’t have power either.  I wound up letting them borrow the propane generator and my Dad told it me it nearly drove them out of the house, which is his way of saying it worked really well.

Damage to the Midcoast area was extensive, there are still trees and limbs down in peoples yard that need to be cleaned up.  Power crews were out working non-stop for days.  They focus on major population centers first such as hospitals and towns, before heading out to the sticks where I live.  The power came back on for us on Tuesday around 8:00 pm.  I was surprised as I was expecting to be without power for at least four or five days, so this was a happy occasion for us.  Some schools were kept closed as they were being used for emergency warming shelters for people who didn’t have a warm place to go.  Luckily the temps weren’t really all that cold and things did start to warm back up a few days later. 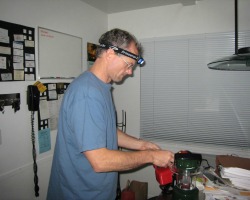 Once again I was struck by how many people are unprepared for something like this.  As a Survivalist, I don’t want to just survive, I want to survive in style.  I want to be watching a movie on my DVD and flat screen TV while sipping a cold beer and eating popcorn I popped over the camp stove.

When I drove down the road right after the power went out I saw a guy sitting in his driveway in his SUV to stay warm.  If nothing else get a woodstove and some lanterns!  This is Maine.  The power goes out.  It’s one of the few things you can depend on and as the grid gets older it takes longer and longer to get back up again.  You need to have some kind of plan in place to stay warm when the electricity stops flowing.  Overall I was satisfied with the way I’d prepared.

A year ago we had a big storm come through and knock out power and when I started it up it wouldn’t produce any electricity at all.  Not one volt.  I took it to a repair shop and found out the brushes were gone, so I paid $100 to have it repaired and serviced and when this storm came around I didn’t regret that money one bit.  The generator delivered and the family was happy.

Looks like it’s going to be a long winter.

10 Lessons From the Power Outage

1.  Make sure your generator is ready!  If you don’t have one, now is the time to buy one.

2.  Test your generator monthly and have it serviced if necessary.  Don’t just start it up to hear it run.  Start it and put it under a load and let it work for awhile.

3.  Make sure you have enough fuel on-hand to last your generator at least a couple of days.  Come up with a fuel rotation plan.

4.  Have enough food and water to last you at least a week.  No self-respecting survivalist would have less than three months food on-hand, just make sure it’s all good.  Camping is a good way to practice for a black out!!

Related:Prepper Power! – The Advantage of Hydroelectricity

5.  Have enough supplies on-hand for others that might land on your doorstep.  You might say, “Tough cookies for those who don’t prepare,” but when your elderly parents show up you’ll take them in.  (I hope.)

8.  Have backups!  If your generator doesn’t work make sure you have a propane or kerosene heater or a wood stove as a back up.  Actually, you’d probably want your wood stove as your primary source of heat.

9.  Have flashlights, headlamps, LED lanterns, gas lanterns, or at the very least candles for light.

10.  Meet and talk with your neighbors about planning for an event, or you can wait until SHTF and have them sitting on your doorstep.

How to Protect Your Solar Gear from EMP (Part 1)

One thought on “10 Lessons From A Multi-Day Power Outage”