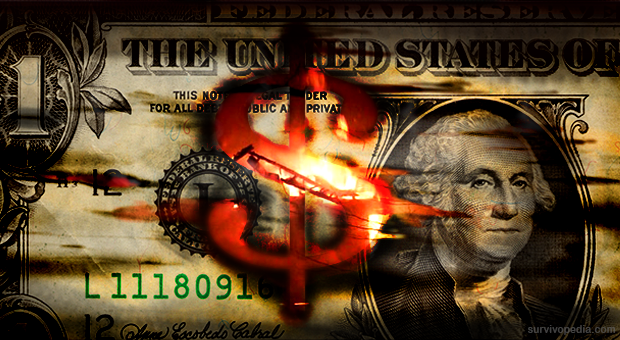 This week, Russia and China signed an important treaty, which looks to be one more coffin nail for the American Dollar. While not the first of its kind, this agreement means that international business between two of the world’s largest countries, both of whom are historic rivals of the United States, will no longer be carried out in U.S. Dollars, but in their own currency.

China already has such an agreement with Japan and the Euro can be seen as accomplishing the same thing for the nations who are using it. Nevertheless, this is just one more indication of what the world thinks of the U.S. Dollar.

The dollar has been the world’s reserve currency and means of exchange ever since the end of World War II. This is easy to understand if we think of that “war to end all wars” as the “War of the last man standing.” Quite literally, the United States was the last man standing, at least economically speaking. At the end of World War II, the United States literally had the only major economy that wasn’t in a shambles. Every other country had been decimated by the effects of the war.

Germany, Japan and Italy had lost the war of course, leaving their countries and their economies in ruin. On top of this, whole factories were moved out of Germany by the victors (especially the Soviet Union) as recompense for the war.

The Soviet Union had gone bankrupt fighting the war as well. During the latter years, the United States was sending war material to the Soviets as part of our “lend lease” program. In other words, we were providing them the means to stay in the war, with the Soviets providing the warm bodies and the United States providing just about everything they needed to fight with. While Russia was a victor, it was an expensive victory for them.

In some ways, England was the worst hit by World War II. They carried the bulk of the war, along with its costs for a couple of years, before the United States got involved. Lend lease was started to provide them with war material, the Soviets were an add-on. While the British Empire survived the war, it was at the cost of losing their empire.

With all that destruction, the United States was the only viable economy left on the face of the earth. We had expended about 40 percent of our gross national product on the war, not the 100 percent that other countries had. No wonder our economy was the only one standing, it was literally the only one large enough to pay for the high cost of that war.

This catapulted the United States into world leadership. We became the guarantor of world peace. At the same time, the U.S. Dollar became the world currency. In an agreement signed by the major nations of the world at Bretton Woods, the major industrialized nations of the world tied their currency to the dollar for the purpose of international trading. That agreement is essentially still in place, although it was nullified by Nixon’s move to unilaterally terminate the convertibility of the dollar to gold.

Okay, so what does this have to do with the agreement between China and Russia?

The problem is that the world is losing faith in the United States, specifically in our political leadership. They look at the White House and see a President who is lying, who won’t stand up for anything and in bent on destroying the greatest country on the face of this earth.

For several years now, China has held the largest foreign portion of the national debt, with 26% of all foreign debt. That amounts to somewhere over two trillion dollars worth of our debt that China, a country who really isn’t all that friendly with the United States, has in their hands. All they would have to do to destroy our economy and our country with it is decide to sell off that debt.

While making such a massive sell-off would hurt China financially, they would win the war. It would probably be the cheapest war of such major proportions ever fought. By comparison, the war in Iraq has cost the United States about seven billion dollars per month, and we didn’t get anything for it. If China were to initiate the first economic war, they could stand to replace the United States as the world’s premier economy for less than it cost us to fight the war in Iraq.

Is this the opening salvo of such a war? Only time will tell. Regardless of what China ends up doing, this step that they have taken can only weaken the strength of the dollar and the economy of these United States.

Find out more about surviving an economic collapse in Conquering the Coming Collapse.

The United States Is On The Precipice Of Widespread Civil Unrest