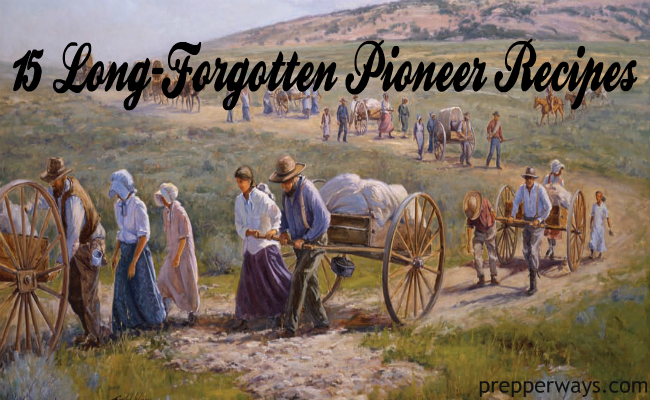 For pioneer travelers, there were very few places along the journey to buy provisions. There were no refrigerators or freezers. Drying was the only practical food preservation method, as canning was still in its infancy. So travelers packed a supply of dry goods, and supplemented it with whatever wild food they could find along the way. Milk and other dairy products came along on the hoof. 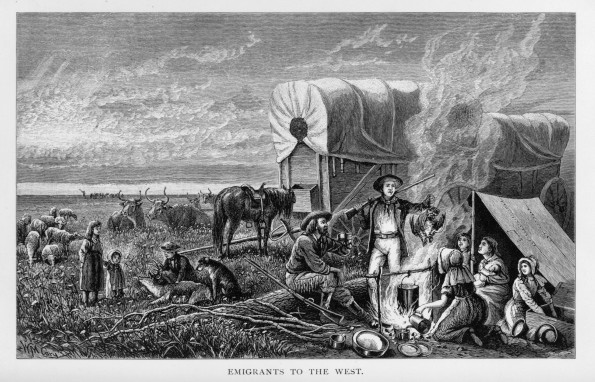 Cooking was done in iron kettles which were set on tri-cornered iron holders. This was placed in the hottest place in the fire in the fireplace. Skillets, pots and tin pans were also used and every family had a huge brass kettle in which they made their soap, apple butter, maple syrup, and rendered out the lard.A dutch oven was used to cook food in, as well as brass kettles, large and small iron pots and skillets. Jars, crocks and mugs were also needed. Early potters found clay to make dishes. The firing of the pottery was done in a huge oven of brick with a slow fire of poplar wood. This firing took twenty-four to thirty-six hours. The pioneer often ate on a trencher. This was a wooden plate made from a board. Some plates, spoons and forks were made from pewter or out of wood horn.

This potato cake recipe came across the plains with a young woman from Austria over a hundred years ago. Potato cakes are delicious served hot or cold with any kind of meat, fish, poultry, or salad.

Wash and peel potatoes, then grate medium fine. Combine with salt, milk, eggs, and flour. Drop mixture by spoonfuls into hot shortening in skillet and fry to golden brown on both sides.

Place sweet and seasoned apple sauce between layers. Dribble a little molasses over the top and place a dollop of whipped cream over it. 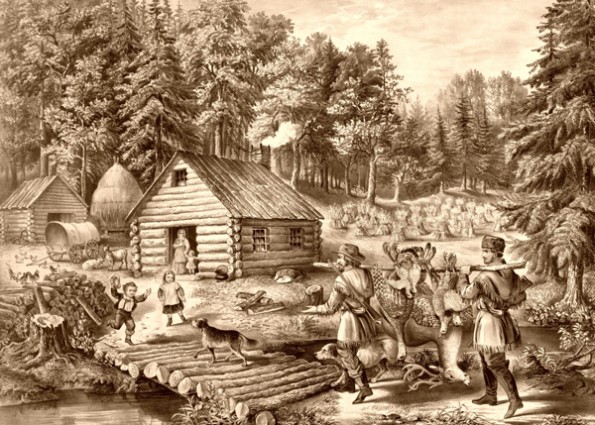 Mix, and after sprinkling the fleshy side of the ham with the salt, pack in a tight barrel. Hams first, then shoulders, middlings. Pour over the brine; leave the meat in brine from four to seven weeks.

This currant bread recipe was brought from Wales in 1856. The Welsh people often used it as a Christmas bread. The Saints found wild currants when they first arrived in the valley, and it is possible that they dried them for winter use. Raisins were not available until later, when cuttings for grapes were brought from California.

Soften yeast in 1/4 cup lukewarm water. Cut shortening into flour. Add remaining ingredients, including yeast mixture, except water. Mix thoroughly, then add enough warm water (about 3 cups) to make a soft but not sticky dough. Let rise overnight (about 7 hours), then form into 4 small loaves. Let rise again (about 2 hours) and bake at 300° F. for 1 1/2 hours. Especially good with cheese.

Serve with syrup made by bringing to boil over a low heat 1 cup dark-brown sugar, 1/4 cup water and tablespoon butter bacon fat. 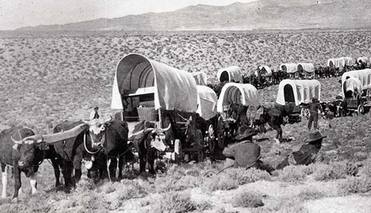 Cut cleaned chicken into small pieces, break all bones, and place it in a pot with one-quart water and two teaspoons of salt. Cover and let simmer for 3 1/2 hours, or until the meat drops from the bones.

If necessary, add a little hot water while it is cooking. When done, there should be a pint of broth. Strain into a bowl and when cold remove all grease that is on the top.

When ready to serve, heat again.

Side Pork and Mormon Gravy

Mormon gravy, common fare among the early settlers and apparently a creation of necessity expressly for the times, is still hearty and nourishing for many of this generation who like to make it with ground beef or frizzled ham or bacon and serve it over baked potatoes.

Cook meat on both sides in heavy frying pan until crisp. Remove from pan and keep warm. Measure fat and return desired amount to skillet. Add flour and brown slightly. Remove from heat and add milk, stirring well to blend. Return to heat and cook and stir until mixture is thick and smooth. Season to taste. Serve with side pork on potatoes, biscuits, cornbread, or even pancakes.

Cook in a 12’ Dutch oven. Use 2 cans slices peaches or pineapple with syrup, 1 package of white or yellow cake mix, 1/3 stick butter and some ground cinnamon. Place fruit into oven. Spread cake mix evenly over fruit. Sprinkle cinnamon and thin slices of butter on top. .  Put lid on top of oven

Place 15 hot charcoal briquettes on the bottom and 10 on the top. Bake for about 45 minutes or until you can stick a toothpick into the cake without having batter on it when you pull the toothpick out.

If you would like to mix the peaches into the cake, do so when the cobbler is about half done, and continue baking until done.

The following is not an actual 1800’s cattle drive recipe.  However, it is in the spirit of the bean dishes the cowboys ate.  Even better yet, it tastes great.

Fry the bacon until done, but not crisp. Pour beans, bacon, onion and garlic into large pan and mix. Simmer for 15 minutes a combination of the mustard, vinegar and brown sugar.

Pour the liquid over the beans and bake at 350 degrees for 1 hour. Mix the beans a couple of times during the cooking process.

Lay meat out smoothly and wipe it dry.

Take a coffee cup full of fine breadcrumbs, a little salt and pepper, a little powdered thyme or other sweet herb, and just enough milk to moisten to a stiff dressing. Mix well and spread over the meat. Roll it up and tie it up with twine.

Brown in salt pork fat, then put in half a pint of water. Cover and cook.

The toughest meat is made tender and nutritious when cooked in this way.

Amazingly this works. However, it is best eaten fresh out of the oven.

Boil the above together for 3 minutes. Let cool. The add:

This version of the stew is as easy as 1-2-3. You don’t need to find a tobacco field to enjoy it.

Ingredients (All cans are the 16-ounce size.)

1 can of lima beans
1 can of corn
1 can of chicken broth
1 can of chicken, or 1 pound of fresh cooked chicken
1 squirrel tail (optional)
2 large onions, chopped up
2 cans of chopped tomatoes
3 cooked, peeled, and chopped potatoes
A dash of pepper, garlic, brown sugar, and salt
Cooking oil
Hot sauce to taste

Put the onions and a tad of oil into the pot first and cook them ’til they turn clear, then add all the rest.

Depending on the amount of juice from the vegetables, you might have to add a little water. Keep it bubbling, and stir it for about 20 minutes.

Two or three eastern communities with the name of “Brunswick” like to claim this stew as their own concoction, but generally, Brunswick County, Virginia, is given the credit. It is thought to have come about in the early 1800s.

These are a Southern tradition.

Put a pot of water on the stove to boil. Mix corn meal and salt in a large bowl. Slowly add boiling water ’til the batter becomes mushy but not stiff. Let this sit while you heat up some shortening in a skillet. When the shortening is hot but not smoking, drop several heaping tablespoons of the corn meal mixture into the pan.

Keep the corn “cakes” separate so they don’t run together. Turn down the heat a little, then flip them over and cook the other side. They should be flat and crispy golden brown. That’s it.

These are called HOE cakes because they were originally cooked over a fire on the flat part of a garden hoe. They are basically an African-American invention and are like those potato chips . . . you can’t eat just one—especially if you drip butter on top.

With the wild fruits—plums, cherries, grapes, gooseberries, currants—and the glorious fresh fruit cultivated so successfully from imported cuttings, the early pioneer women were soon making some of the delicacies that reminded them of “home.” Two of the favorites were Swiss apple-cherry pie, a recipe that came into the valley with a young Swiss convert who was famed for its making, and 101-year-old pastry, as good today as it was in the early days. 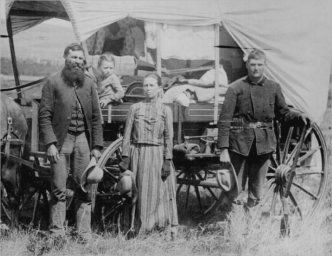 Cut shortening into flour and salt. Beat egg lightly in a 1 1/2-cup measure; add vinegar and fill cup with cold water. Add just barely enough liquid to dry ingredients to hold dough together—about 4 tablespoons—reserving remaining liquid for next batch of pastry. Handle dough as little as possible. Roll out into pastry and use as desired. Makes two 9-inch pie shells.

In short, the pioneers lived more simply than most people today are willing to live and that is why they survived with no grocery store, no cheap oil, no cars, no electricity, and no running water.Just like our forefathers used to do, The Lost Ways teaches you how you can survive in the worst-case scenario with the minimum resources available.It comes as a step-by-step guide accompanied by pictures and teaches you how to use basic ingredients to make superfood for your loved ones.Watch the video below:

100-Year-Old Way to Filter Rainwater in a Barrel

Back To Basics: How To Make Rum At Home