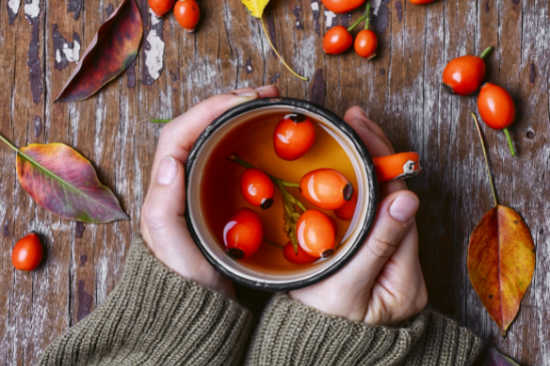 Rosehips are a multipurpose herb that can be utilized during the flu season. Read more on some of the outstanding benefits that rosehips have to offer your health.

While no cure exists for the common cold, there are some immune-boosting plants that can reduce the duration and severity of colds, and one of those may just be in the backyard – rose hips. They are the berry on the rose bushes. Rose hips develop just below the flower, and they hold the rose’s seeds. They can be harvested in the fall when the rose hips turn an orange-red color.

Rose hips are simple to harvest – just pull them off their branches; however, wear gloves to protect hands and arms from their thorns. Once picked, wash the rose hips, slice off their ends with a sharp knife, and then remove the seeds. The seeds contain tiny hairs that need to be removed before ingesting otherwise they will irritate the stomach lining. Crush the rose hips and use them immediately or place them in a warm place for 5 to 7 days to let them dry.

Raw rose hips contain copious amounts of vitamin C but dried rose hips loose some of their vitamin C content. Rose hips contain high levels of phenolic and flavonoid antioxidants. Flavonoids cannot be produced within the human body; they must be consumed. Dr. David Nieman recommends between 400-500 mg of flavonoids per day, but the average person only intakes 50 mg. The average person has a deficit. The benefits of a high flavonoid intake are the following:

(The Benefits of Antioxidants: Polyphenols and Flavonoids (vitapodworld.com))

In 2018, Dr. Kaj Winther conducted a study with 120 people. “During the six winter months in Denmark, the volunteers reported their incidences of colds. They also reported the duration and the symptoms when they had a cold. The researchers found of the 107 volunteers who completed the study, 21 of 58 people in the placebo group reported having a cold. That is over 53 percent of the group. During the same period, only 24 out of 54 people in the rose hips group got a cold. That is 43.6 percent compared to the 53.4 percent in the placebo group.” (Rose Hips Reduce Colds and Common Cold Severity – Journal of Plant Medicines) Case Adams, PHD, found that the group that had the rose hips had milder symptoms, i.e., less headaches, muscle stiffness, and fatigue.

As stated above, the vitamin C in rose hips are a powerful antioxidant that helps clear cells of free radicals thus strengthening the body’s immune system; however, in addition, rose hips have been used “to treat rheumatoid arthritis, fever, diarrhea, upset stomach, and infections.”(Rosehips Uses, Side Effects & Warnings – Drugs.com)

Numerous studies have shown that rose hips help to treat symptoms of osteoarthritis and rheumatoid arthritis. “In 2005, the Scandinavian Journal of Rheumatology reported that 5 gram rosehip supplement reduced osteoarthritis pain and the need for pain medications better than a placebo. And then in 2010, Phytomedicine found they improved physical function in people who suffer from rheumatoid arthritis.  (Rose Hip: Benefits, Side Effects, Dosage, Interactions (verywellhealth.com)) Because of this, the supplement market has been flooded with tablets stating that they help to alleviate the pain caused by arthritis; however, as stated above, rose hips do lose their potency when dried. One way to ensure that benefit is achieved is to make rose hip syrup, which can be found here: The Benefits of Rosehip Syrup | Ready Nutrition.

Rosehips have been used to treat gastrointestinal problems. “According to a 2017 review from the University of Zaragoza in Spain, rose hips appear to slow the contraction of the intestinal muscles.” (Rose Hip: Benefits, Side Effects, Dosage, Interactions (verywellhealth.com)) However, there is also information that states that taking too many rose hips can lead to diarrhea. The pectin and fruit acids are a diuretic and mild laxative. Those who suffer from ulcers, may benefit from taking rose hips because it alters the pH balance in the stomach – thus providing an inhospitable environment for Helicobacter pylori (H. pylori), which is responsible for developing stomach ulcers. (Rose Hip: Benefits, Side Effects, Dosage, Interactions (verywellhealth.com)

While it is easy to brew a cup of simple rosehip tea, blending it with hibiscus adds an extra punch of beneficial flavonoids and other antioxidants. It has an invigorating taste, and it is a pleasing pink color.

This tea may help to support your immune system, as well as boost heart health and treat cancer symptoms.

Bring fresh water to a low simmer, and then pour over the dried rose hips and hibiscus. Let the flowers steep in the fluid for 10 minutes, and then add local honey for an additional benefit.