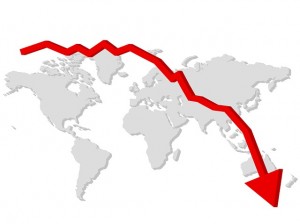 Are you waiting for the next major wave of the global economic collapse to strike? Well, you might want to start paying attention again. Three of the ten largest economies on the planet have already fallen into recession, and there are very serious warning signs coming from several other global economic powerhouses. Things are already so bad that British Prime Minister David Cameron is comparing the current state of affairs to the horrific financial crisis of 2008. In an article for the Guardian that was published on Monday, he delivered the following sobering warning: “Six years on from the financial crash that brought the world to its knees, red warning lights are once again flashing on the dashboard of the global economy.” For the leader of the nation with the 6th largest economy in the world to make such a statement is more than a little bit concerning.

So why is Cameron freaking out?

Well, just consider what is going on in Japan. The economy of Japan is the 3rd largest on the entire planet, and it is a total basket case at this point. Many believe that the Japanese will be on the leading edge of the next great global economic crisis, and that is why it is so alarming that Japan has just dipped into recession again for the fourth time in six years…

Japan’s economy unexpectedly fell into recession in the third quarter, a painful slump that called into question efforts by Prime Minister Shinzo Abe to pull the country out of nearly two decades of deflation.

The second consecutive quarterly decline in gross domestic product could upend Japan’s political landscape. Mr. Abe is considering dissolving Parliament and calling fresh elections, people close to him say, and Monday’s economic report is seen as critical to his decision, which is widely expected to come this week.

Of course Japan is far from alone.

Brazil has the 7th largest economy on the globe, and it has already been in recession for quite a few months.

In the past five days, 23 powerful Brazilians have been arrested, with even more warrants still outstanding.

The country’s stock market has become a whipsaw, and its currency, the real, has hit a nine-year low.

All of this is due to a far-reaching corruption scandal at one massive company, Petrobras.

In the last month the company’s stock has fallen by 35%.

The 9th largest economy in the world, Italy, has also fallen into recession…

Italian GDP dropped another 0.1% in the third quarter, as expected.

That’s following a 0.2% drop in Q2 and another 0.1% decline in Q1, capping nine months of recession for Europe’s third-largest economy.

Like Japan, there is no easy way out for Italy. A rapidly aging population coupled with a debt to GDP ratio of more than 132 percent is a toxic combination. Italy needs to find a way to be productive once again, and that does not happen overnight.

Meanwhile, much of the rest of Europe is currently mired in depression-like conditions. The official unemployment numbers in some of the larger nations on the continent are absolutely eye-popping. The following list of unemployment figures comes from one of my previous articles…

The world is facing some real economic problems.

Another traditionally strong economic power that is suddenly dealing with adversity is Israel.

In fact, the economy of Israel is shrinking for the first time since 2009…

Israel’s economy contracted for the first time in more than five years in the third quarter, as growth was hit by the effects of a war with Islamist militants in Gaza.

Gross domestic product fell 0.4 percent in the July-September period, the Central Bureau of Statistics said on Sunday. It was the first quarterly decline since a 0.2 percent drop in the first three months of 2009, at the outset of the global financial crisis.

The rouble has been plummeting like a rock, and the Russian government is preparing for a “catastrophic” decline in oil prices…

Such a scenario is “entirely possible, and we admit it,” Putin told the state-run Tass news service before attending this weekend’s Group of 20 summit in Brisbane, Australia, according to a transcript e-mailed by the Kremlin today. Russia’s reserves, at more than $400 billion, would allow the country to weather such a turn of events, he said.

Crude prices have fallen by almost a third this year, undercutting the economy in Russia, the world’s largest energy exporter.

It is being reported that Russian President Vladimir Putin has been hoarding gold in anticipation of a full-blown global economic war.

I think that will end up being a very wise decision on his part.

Unfortunately, the number of children that won’t even have a roof to sleep under this holiday season just continues to grow.

A stunning report that was just released by the National Center on Family Homelessness says that the number of homeless children in America has soared to an astounding 2.5 million.

That means that approximately one out of every 30 children in the United States is homeless.

The number of homeless children in the United States has surged in recent years to an all-time high, amounting to one child in every 30, according to a comprehensive state-by-state report that blames the nation’s high poverty rate, the lack of affordable housing and the effects of pervasive domestic violence.

Titled “America’s Youngest Outcasts,” the report being issued Monday by the National Center on Family Homelessness calculates that nearly 2.5 million American children were homeless at some point in 2013. The number is based on the Education Department’s latest count of 1.3 million homeless children in public schools, supplemented by estimates of homeless preschool children not counted by the agency.

The problem is particularly severe in California, which has about one-eighth of the U.S. population but accounts for more than one-fifth of the homeless children, totaling nearly 527,000.

This is why I get so fired up about the destruction of the middle class. A healthy economy would mean more wealth for most people. But instead, most Americans just continue to see a decline in the standard of living.

And remember, the next major wave of the economic collapse has not even hit us yet. When it does, the suffering of the poor and the middle class is going to get much worse.

Unfortunately, there are already signs that the U.S. economy is starting to slow down too. In fact, the latest manufacturing numbers were not good at all…

The Federal Reserve’s new industrial production data for October show that, on a monthly basis, real U.S. manufacturing output has fallen on net since July, marking its worst three-month production stretch since March-June, 2011. Largely responsible is the automotive sector’s sudden transformation from a manufacturing growth leader into a serious growth laggard, with combined real vehicles and parts production enduring its worst three-month stretch since late 2008 to early 2009.

A lot of very smart people are forecasting economic disaster for next year.

Hopefully they are all wrong, but I have a feeling that they are going to be right.