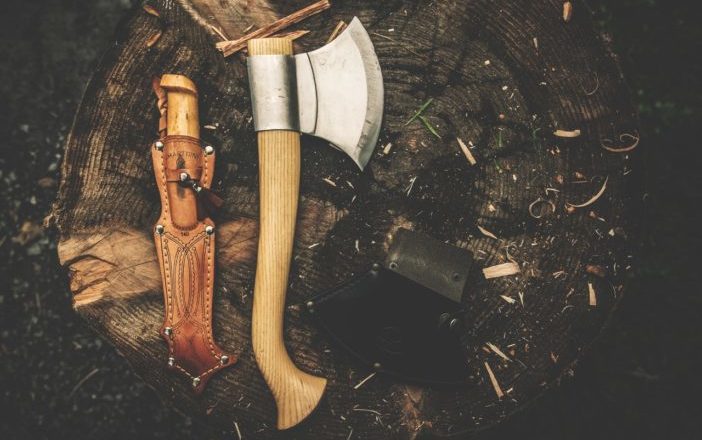 Just as the men of the Hudson’s Bay Company, the Mountain Men of the American frontier, polar explorers, and others who have made a lifestyle around their outdoor endeavors, all would have relied heavily on basic bushcraft tools on their ventures to carry out repairs, process firewood, get game and fish for food and perform a range of vital tasks.

Nowadays we often rely on specialist equipment for every task rather than a general suite of tools that can be applied to a range of tasks. Perhaps we think those tools are too heavy or that we won’t have any use for them but often those Bushcraft tools can lessen our load of specialist equipment, and even drastically extend the range of our bug out preparations if instead of weighing ourselves down with supplies we rely on a basic set of bushcraft tools for Overlanding and our skills to gather what we need on our journey.

To get some guidance on what these Bushcraft tools should be we can refer to George Washington ‘Nessmuk’ Sears 1884 book where he describes his system of three cutting tools that he carried on his tips into the Adirondack Mountains.

He advocated carrying a double bit hatchet, belt knife, and stout pocket knife. Each of these bushcraft tools had a specific role, the hatchet was primarily for wood processing and sometimes for skinning larger game animals, his knife was dedicated to skinning and food preparation and the pocket knife was his craft tool for whittling and working with wood.

Figure 1; A modern take on the style of knives Nessmuk once carried; A Camillus Bushcrafter and Case Trapper

There is absolutely nothing wrong with this setup but changes in the way we carry out expeditions or prepare to bug out to a new location nowadays, advancements in technology, and some legislative changes have had an impact on what it might be useful to carry.

First, the dedicated skinning knife, the pattern of knife pictured in Nessmuks book has become associated with his name to such a degree that knives of a similar pattern are known nowadays as ‘Nessmuk’ knives, in actual fact, they are just skinning knives and you will see them in any small or large scale game processing plant.

Nessmuk needed a dedicated skinning knife because he provided a lot of his food on an expedition by hunting and fishing. Nowadays however carrying firearms for hunting in particular but sometimes also fishing is normally not going to be an integral part of our expeditions. It would in a grid-down scenario though.

Figure 2; a double bit axe like Nessmuks and a sensible .22 rim fire rifle for getting game on your expeditions

Firearms ownership is more regulated now than it was in Nessmuks day and most places you might hunt while on expedition would require a landowner’s permission or a hunting tag which makes hunting for food on your expedition very difficult. Not to mention the extreme difficulty of transferring weapons across international borders.

For those reasons, as much as I would like to head off on long-distance expeditions with a rifle or shotgun and gather my own food, I can’t advocate the inclusion of firearms amongst your expedition Bushcraft tool kit. Obviously, each location and individual needs may vary so adjust accordingly to your situation.

Nessmuk carried a double bit hatchet so he could keep one side sharpened at a steep angle so it was resilient to rough use such as copping through tree roots and splitting wood and the other sharpened at a much shallower angle so it would be fine enough to use in large butchery tasks. As you are unlikely to be butchering any game you can dispense with the double bit axe and use something like a Scandinavian Forest Axe.

Nessmuk didn’t pack a saw but in the 1880’s saw’s didn’t come in the compact packages that we can get them now. Your axe can do everything a saw can and deal with much larger timber but it doesn’t leave nice clean flat cuts in larger timber which is often very useful.

If I could only have one of the two I would always choose the axe but for a few extra ounces in your pack a saw is a good investment. Small folding saws are easy to pack and are great for clearing paths and collecting fire wood.

Another option if you want to include a saw in your Bushcraft tool kit is to carry a bow saw blade and fit your own handle to it on the trail. Bow saw blades are held under tension by their handle, if you buy one from the store that handles will normally be made of tubular steel but a bent tree limb is equally effective and easily fabricated.

Figure 4; a bow saw made with a blade carried coiled up in a cooking pot and a hazel sapling softened and bent over the fire.

In emergencies carrying your knife on your body will prove to be a potential lifesaver, at least if you are separated from your teammates or equipment, perhaps in a river crossing gone bad or while navigating in bad weather, you have a very important tool which can be used in a survival situation.

The ideal knife for outdoors use would have something in the region of a four-inch blade, remember if you are carrying an axe or saw you won’t need your knife for splitting wood or hacking your way through the undergrowth so it doesn’t need to be huge. It should be strongly constructed with a full tang that goes through the full length of the handle and has a grind that promotes ease of use.

Knives are sharpened at the factory in different ways depending on the intended function of the knife, for best food prep performance something with a flat grind as pictured below is best and is probably the kind of grind that Nessmuk had on his knife while if you want something which is more dedicated to working wood a Scandinavian grind like the Eickhorn below, would be more desirable.

Figure 5; An Eickhorn Nordic Bushcraft Knife, a good choice for a primary knife on expedition.

As well as food prep your knife can be excellent entertainment, we all wanted pocket knives as children didn’t we? Sitting around the camp fire in the evenings with a knife and a piece of wood is far more entertaining than watching the television and what better way to greet friends and family when you return home from expedition than to be able to give them little trinkets that you have carved while on your globe-trotting adventure.

Figure 6 A ‘ball in a cage’ incorporated into the handle of a spoon made out of a piece of firewood while I sat next to a fire by a frozen lake in Sweden earlier this year.

As well as your belt knife, if woodworking and crafting is something that you would like to incorporate into your expeditions simple carving knives like the one pictured above add very little weight to your pack and can make fine carving tasks a little easier than using you larger belt knife.

Nessmuks pocket knife was what he used for the crafting tasks I have just described above, without the need to skin and process game the belt knife in my opinion becomes the workhorse, ‘jack of all trades master of none’ tool, and the pocket knife almost becomes redundant. As technology has advanced however we have multi-bladed pocket knives and multi-tools which include screwdrivers, pliers, can openers, and other features.

If you have a pocket knife or Multitool there should be no need to carry can openers and bottle openers amongst you kit. While you should have a comprehensive tool kit if you are traveling by vehicle on a foot expedition your multi-tool becomes you only tool kit.

As far as the knife goes if you are carrying a belt knife you will probably reach for that more often than not when a task requires a knife as it should be located conveniently on your belt. However, if you are traveling on foot backpack harnesses interfere with belt knives and you may choose to put your knife in your pack so your pocket knife becomes your primary tool.

However you choose to equip yourselves these few basic tools have been used successfully in the outdoors for hundreds of years and will stand you in good stead for any task that you are confronted with on your expeditions.

Prepping vs Bushcraft: Which is Better for SHTF?

How To Build Your DIY Basic Bushcraft Kit

How to Hunt Deer with a Bow Effectively