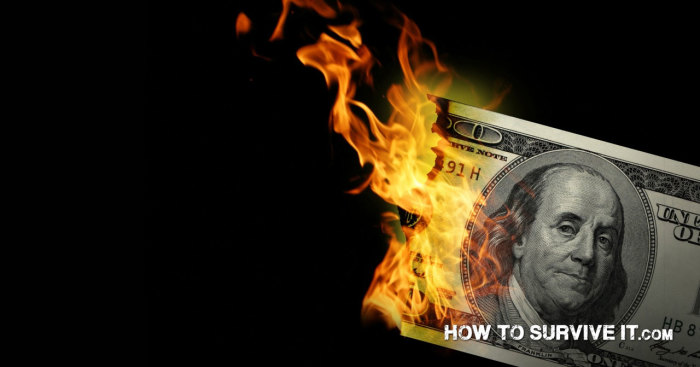 The value of the U.S. Dollar is falling faster than Felix Baumgartner; you can see clear proof of this in, among other things, the price of gold. While gold prices had remained fairly steady for more than 200 years, they’ve been climbing much more rapidly since the mid-70s, and in 2010, they shot through the roof. In 1950, you could have bought an ounce of gold for a mere $40; today, that same ounce of gold would cost a staggaring $1,734. It’s not that that value of gold rose; it’s simply that the value of the dollar dropped. Dramatically.

A time will soon come when our paper money becomes useless for commerce. When that day arrives, you damn sure had better have something people want, or you may be forced to resort to unsavory means to provide for our family.

I’m not going to suggest stocking up on gold; that ship has sailed, and financially, it’s probably out of reach for most people anyway. No, today, we’re going to talk about a few everyday items that are cheap and abundant today, but won’t be in the near future. These are items you’ll be able to barter for all sorts of goodies you may want when the proverbial SHTF.

With a virtually unlimited shelf life and widespread demand, this is an easy choice. While any type of alcohol will be valuable to others, liquor, will give you the most bang for your buck because of its many uses. Of course, there is the obvious; getting drunk to temporarily forget about the shitty condition of our once great nation, but it also makes a great, albeit painful, antiseptic, cleaning agent, antifreeze for your car, cooking or heating fuel, a solution for mixing medicines, and even as a topical solution to cool fever patients.

Does it seem absolutely ridiculous that we used to spend about 15 cents for a cup of coffee, but today, no one feels stupid about standing in line for 10 minutes to buy a $5 cup of coffee? How would you like to be the only person in town with enough extra coffee use it for barter?

Do the math; with a little over half a million police in America, and over 360 million citizens, most of us will be on our own when it comes to defending our families. This doesn’t even take into account the number of police who will, understandably, leave their post to protect their own family if anarchy sweeps the country. You can’t go wrong when it comes to stockpiling ammunition; you can obviously use it for self-defense, but it makes one hell of a valuable resource to people who haven’t prepared.

When the economy breaks down, the ability to replace things that break down will be greatly diminished. This is where resources that enable people to do so will come in handy. Hand tools, duct tape, glue, string, screws, and such; basically anything you might need to fix something.

The vast majority of people will have made no preparations before things begin to fall apart. We see this every time a hurricane is headed for landfall and within hours, grocery store shelves are stripped bare. One can acquire necessities in most scenarios, whether through barter, manipulation, or by force, however, one cannot simply acquire the knowledge needed for long-term survival. Short of joining forces with someone who already has the knowledge, a person has two options; learn by trial and error (a steep and deadly learning curve), or crack open a book. I recommend having a few extra copies of: How to Survive the End of the World as We Know It

, and Primitive Skills and Crafts