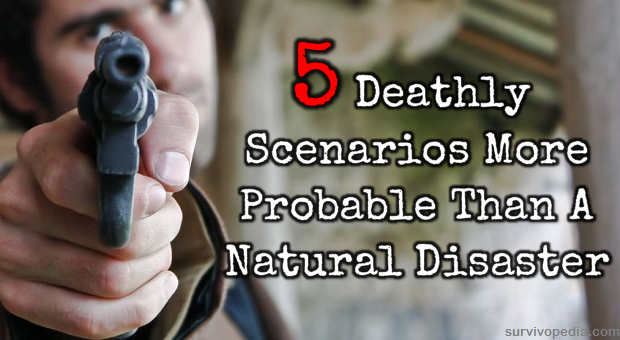 You’ve stockpiled years of food and water, you have a bug-out room all ready to occupy and you’ve armed yourself to the teeth in preparation for whatever disaster may befall you. That’s all well and good, but are you prepared for the day-to-day dangers that you face?

There are at least 5 deathly scenarios that are more probable than a natural disaster. Today we’d like to talk about them and give you some tips to avoid these situations.

Just to throw some numbers out there, your chance of dying:

Though we certainly worry about this if the world ends, it’s a very real risk in everyday life as well.

Exposure to extreme heat and cold are two of the quickest ways to die because once your core temperature varies by just a few degrees, you’re in trouble.

If you live in an area where you’re forced to be outside in the cold, make sure that both your car and your home are stocked with items that you can use to stay warm or to treat frostbite or hypothermia. See our article about how to treat frostbite here.

Strangely enough, Florida has a significant number of people who die from hypothermia because they’re not as prepared for cold weather as their northern counterparts, especially when out on the water. It goes without saying that residents of states that experience extreme cold have to be prepared, too.

Your car should have an extra layer or 3 of clothes in case you get wet, or in case you just need to bundle up more. You should also have a first aid kit that includes hot pads so that you can warm up flesh that’s been exposed to the elements for too long. At home, keep a ready supply of mittens and warm socks. Garbage bags should be stored at both places because they’re a good way to keep body heat in and moisture out should you need to venture outside when it’s extremely cold.

Symptoms of hypothermia include shivering (early stages), lethargy and hallucinations (later stages). If you’re in the cold and you experience these symptoms, get inside and get warm!

Exposure to extreme heat is just as deadly, often because we don’t pay as much attention to the symptoms. If you begin to get confused or you break out in a cold sweat and goose bumps when it’s hot out, you need to get somewhere cool immediately. Stop what you’re doing regardless of what it is because you’re only a few minutes away from being in serious trouble.

We’re not talking about gang murders or drive-by shootings here; Americans are eight times more likely to die from somebody accidentally shooting them than our economically-equivalent nations such as Canada, France and England.

There’s no data to explain why but one guess could be simple lack of training and basic stupidity. Handling of guns by people who don’t know what they’re doing is an accident waiting to happen.

If you include intentional and unintentional deaths by shooting in people under 15 years of age, the US has an alarming 12 times higher death rate than the other 25 high-income countries COMBINED.

Though, any limitation of our constitutional rights as they are stated in the 2nd Amendment is out of the question.

The best way to (pardon the pun) dodge this particular bullet is to make sure that the people that are around you know how to use their weapons and how to handle them responsibly. Also, keep them away from little ones who aren’t old enough to be trained yet.

Your odds of dying in an ATV or off-road vehicle accident are astronomically greater than getting killed by a natural disaster or terrorist attack, at least right now. As preppers, we often own or have ready access to these types of vehicles and most of us let our kids ride them too, once they reach a certain age.

The best way to avoid dying this way is to use your head, and to teach your kids to do the same. Though ATVs are fun and can be used in all sorts of cool recreational ways, they’re still dangerous and need to be respected. Rider safety courses may seem lame but they’re extremely useful, especially for beginners. If you’re caught in a house that’s on fire, you’re more likely to die from smoke inhalation than from actual flames but neither is a pleasant death.

Faulty wiring is often a cause of house fires and they spike around Christmas time because people use live trees which dry out and become extremely flammable. We also overload circuit panels with all of the extra lights.

Using space heaters is another major cause of house fires, as is smoking in bed, though that’s decreased some since they started adding the chemicals to make your cigarette go out if it’s not puffed regularly.

To avoid a house fire, have your wiring inspected regularly, don’t wire things yourself unless you’re properly trained and don’t use old appliances with broken wires. Also, quit smoking or smoke outside and use extra caution when you’re hanging your Christmas lights.

Unfortunately, suicide is the 10th leading cause of death in the US.In 2013, the latest year that we have data for, a suicide occurred every 12.8 minutes around the clock. Of those deaths, about 90 percent of them occurred in people with some kind of mental illness, but remember that depression falls in that category.

Also, it’s not young people who are killing themselves the most; people 45-85 were twice as likely to commit suicide as younger people. And men are also about 4 times more likely to kill themselves than women.

The saddest part about suicide is that people who are serious about doing it typically don’t talk about it. Watch your friends and loved ones for signs that things are right and if you start thinking about it personally, talk to somebody before taking action; death is permanent.

You’re much more likely to die falling out of bed than by natural disaster or terrorist attack but we all know that this can change if we’re invaded. We’re not saying that you should stop prepping but you SHOULD also be prepared to avoid death by more common means than you might think.

These were just 5 survival scenarios more probable than a natural disaster and there are many more. The lesson is to be careful and to know when something is dangerous.

Live life but don’t be stupidly irresponsible and you should be fine! Continue to prep, educate yourself and your family and, in the famous words of Leonard Nimoy, live long and prosper!

If you have anything that you’d like to add, please feel free to do so in the comments section below!

CLICK HERE to find out more about simple and effective first aid techniques that you need to learn for survival.

The Many Uses Of Animal Fats