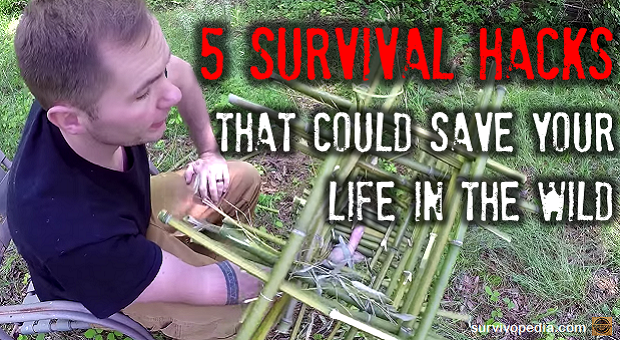 Surviving in the woods is something that you may, at some point, need to know about. Even if we never experience a local or global natural disaster that would force you into the woods in order to survive, there are always other times when you may need it.

For instance, if you’re camping and lose your way or if your car breaks down in the woods and you are miles away from civilization, you’ll need to know how to survive for a day or two.

Survivopedia has teamed up with the guys from Survival Know How to bring you a series of videos about 5 crucial hacks for your wilderness survival. We will teach you how to build a snare to catch small game, how to make a simple water filter, how to create fire using a mirror, how to make a tarp shelter and how to make a 2-liter bottle fish trap.

Each of these survival hacks requires very little in the way of materials and most of them, you’ll have in your bug-out bag or your vehicle bag anyway. If not, they’d be good to add.

This is a pretty cool way to create a basic snare to catch small game. In the video below, Malcolm uses bamboo and a few feet of string but you could use any kind of sticks that you can find. It’s important that the sticks be relatively small in diameter. This is because the snare is going to be built by stacking the sticks atop each other in a manner that will leave gaps as large as the stick. If you use sticks that are too big around, your prey will be able to escape through these gaps.

You’ll be using the strings as the frame for the snare and will build the walls in such a way that when the snare is complete, it will be held together by the tension on the string. It’s extremely simple to put together.

Next you’ll learn how to make the stick that holds the trap up, which is actually quite clever. Finally, he’ll show you how to set the bushcraft trap so that it will snare a small animal. It’s easy and it seems as it would be effective. Check out the video!

2. How to Make a Simple Water Filter

There’s nothing more critical to survival than water. Our bodies are made mostly of it and your brain and organs are quickly affected if you don’t have enough. As a matter of fact, you can only go about 24 hours without water before your body and your brain stops functioning optimally. It won’t be long after that you die.

The how-to video below shows you how to make a simple water filter using a scrap of cloth and two empty containers. It works on the wicking method and the water will still need to be boiled or sanitized, but it will be free of debris and dirt.

3. How to Create Fire from a Mirror

Next to lack of water or food, exposure to the elements is the next biggest danger to you if you’re stuck in the woods. You need to know how to build a fire for a couple of reasons. First, many places get incredibly cold once the sun sets, and may even be dangerously cold during the day. You’ll need to build a fire to keep warm and to cook your food.

Another reason that you may want to build a fire is so that rescuers can find you. One of the first things that search parties look for is smoke, especially if they’re searching from the sky. Of course, if you’re trying to hide, you’ll want to build a smaller fire in the cover of trees of in a cave in order to hide the smoke.

Regardless, you’ll still need to stay warm and cook the meat that you caught in the snare, so watch this video to see how to start a fire using a vanity mirror. We’ve always said to include a mirror in your kits, so you won’t have anything more to add; you’ll already have what you need. Well, that and sunshine. Check it out – you may be surprised by how well this works!

4. How to Make a Tarp Shelter

You’ve got food, you’ve got water, you’ve got fire, and now you need shelter. Those are the basics that will keep you alive if you’re stuck in the woods trying to survive. Since we always recommend carrying a tarp or plastic garbage bags and 550 cord with you in your bug-out and vehicle bags, you won’t need much more other than a little bit of elbow grease.

The video below goes into detail about where you should build your shelter and offers some advice about where NOT to build it. He also talks about the prepping steps that you should take prior to putting your shelter up then tells you how to make it warmer and more comfortable. Check it out – you’ll love the simplicity of it.

5. How to Make a 2 Liter Bottle Fish Trap

Just in case your snare doesn’t work, you may want to have a back-up plan. Fish is pretty tasty and it’s also extremely good for you. It has a ton of protein and healthy fat that will help you to survive no matter what your circumstances are.

For this project, you’re going to need a 2-liter bottle, some string and a knife. Though the video shows a 2-liter bottle, you could use a smaller water bottle or even a larger jug. You’ll be catching minnows, which you can eat or use as bait to catch other fish. This is actually a pretty cool trick that you may want to use if you’re a fisherman in order to catch fresh bait throughout the day as you float along.

The concept is the same as commercial crab traps and is a pretty slick hack.

All five of these hacks are easy to do and don’t require any other materials than you should have in your bug-out kit or vehicle bag. Not only are they great for survival, they’re even good if you’re just out camping and having fun.

We’d love to hear what you think if the videos so let’s hear your opinion in the comments section below. Also, if you have any other cool hacks, feel free to share those, too!

This article has been written by Theresa Crouse for Survivopedia. The videos have been created by Survival Know How.