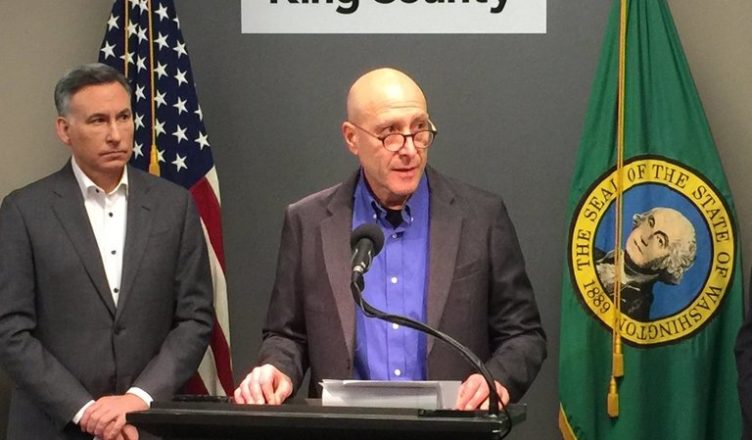 Local health officials on Monday announced the total number of cases of COVID-19 was up to 14 in King County. Out of those, five had died as of Monday.

Statewide, there have been six confirmed deaths due to the virus. All have been patients at Evergreen Health. One was a case from Snohomish County, officials announced in a news conference.

King County Executive Dow Constantine announced an emergency declaration at the news conference, which would help allocate resources to respond to further cases.

The announcement came within 72 hours of the first confirmed case on Friday in King County.

Health officials have stressed throughout the weekend that the spread probably didn’t start this weekend, but were confirmed through testing.

Dr. Jeff Duchin, a health officer for King County Public Health at the news conference said there may have been many cases, a “vast majority” of them mild.

“We expect the number of cases to increase in the coming days and weeks,” Duchin said. “We are taking this situation extremely seriously.”

Out of the 14 cases, eight were linked to Kirkland’s Life Care, a nursing and rehabilitation facility, including four deaths. Duchin described the situation as an outbreak in the facility.

Public Health director Patty Hayes was among the health officials to stress hygiene and handwashing to mitigate the spread. She also said healthy people should not be buying masks, asking them to leave the supply for frontline healthcare workers, and those with illnesses.

Despite schools across the region testing students for the virus and shutting down, King County Public Health recommended against school closures. It also tweeted there were no confirmed cases in Seattle Public Schools yet.

Less than a day after public health officials on Sunday confirmed two more cases of COVID-19, both men in their 60s in Seattle and Renton, they confirmed the second death due to the virus.

A man in his 70s, with underlying health conditions, died from the novel coronavirus while he was hospitalized at Evergreen Health, King County health officials announced Sunday.

The two men whose cases were announced Sunday morning, were in critical condition, one at Valley Medical Center and the other at Virginia Mason Medical Center. The two also had underlying health conditions, according to the State Public Health Laboratory.

The new cases ended a weekend full of updates that raised the level of alarm in the state. Friday, two Washington cases were confirmed, and on Saturday a man in his 50s died from the virus in Kirkland.

After the first death confirmed in Washington, Gov. Jay Inslee announced a state of emergency.

The U.S. Postal Service reported one of the six cases was an employee, but the cause for alarm was low according to King County Public Health.

“In consultation with the King County Public Health Department, we have been informed the current risk to our employees is low,” USPS said in an emailed statement. “The safety and well-being of our employees is one of our highest priorities.”

The employee was not a mail carrier, or someone who regularly handled individual parcels or letters.

The number of reported was expected to rise as more people are tested, a statement from health officials said.

Washington reported the first case of the novel coronavirus in January, when a Snohomish man was diagnosed with it.

Dr. Trevor Bedford, a genetic and infectious disease researcher at Fred Hutchinson Cancer Research Center, on Saturday tweeted that the case from January and one announced Friday were most likely genetically linked. Bedford said the possibility of a coincidence in the genetic similarity between the two was “highly unlikely.”

“This strongly suggests that there has been cryptic transmission in Washington State for the past 6 weeks,” Bedford tweeted. He also said there was likely “hundreds of cases.”

“I believe we’re facing an already substantial outbreak in Washington State that was not detected until now due to narrow case definition requiring direct travel to China,” Bedford said.