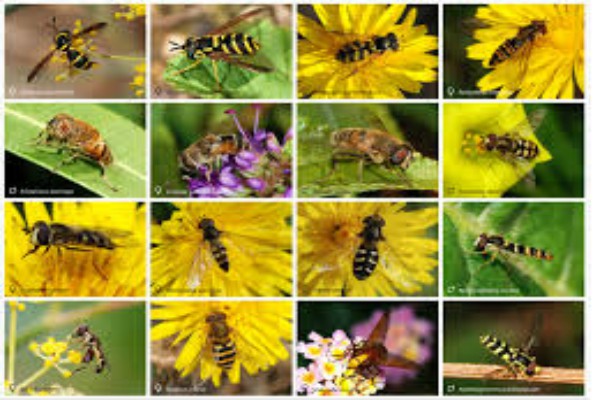 Speaking strictly from a gardener’s perspective …There are good bugs and there are bad bugs. And the more you have of the former, the fewer problems you’ll have with the latter. Here are six beneficial insects that every gardener should know, and tips on how to get them to hang around your garden.

1. Syrphid Flies – How they Help

Sweat bees, flower flies, and hover flies are three common names for the members of this family of flies. The syrphid fly has stripes like a bee but, despite its nickname, it is not a bee, and it does not sting. Flying adults benignly hoverand dart about, sippingnectar from garden flowers, and pollinating them in the process. Females of predaceous species lay rice-lookalike eggs singly on leaves, usually near coloniesof aphids. The larvae are small—about ½ inch—but important predators of scales, thrips, mites, and especially aphids. Grasping its prey by the jaws, thelarva sucks it dry. A single syrphid larva can consume hundreds of aphids in a month.

The best way to attract syrphid flies is to plant sweet alyssum. They also like catmint, yarrow, buckwheat flowers, cilantro flowers, and many other blooming plants. Nothing, however, draws them in like sweet alyssum.

2. Bumblebees – How they Help

There are about fifty known species of bumblebee in North America. They are indefatigable pollinators, and generally non-aggressive. Several qualities distinguish bumblebees from the honeybees that our agricultural system has grown so dependent on:

1) Their colonies are comparatively small (from 50 to about 400 bees) and do not persist from year to year, making them less susceptible to catastrophic colony disorders;

2) Different bumblebee species have different tongue sizes, which can govern their food choices. Longer tongued bees are efficient pollinators of tubular flowers such as lavender;

3) Unlike honeybees, they forage in cold, rainy, and cloudy conditions;

4) They are “buzz pollinators,” that is, they shake the flower as they feed on nectar, which makes them very efficient at pollinating certain types of flowers, particularly tomatoes.

Bumblebees are not picky. They love clover, sunflowers, mint, coneflowers, asters, tomatoes, and any number of other flowers. The trick is to plan your garden so that you have pants in bloom all year long, from spring hellebore through fall dahlias. See HGSA’s article “Priority: Pollinators” for lists of early, mid-season, and late season pollinator plants that you can grow from seed.

3. Parasitic Wasps or Parasitoids – How they Help

Parasitic wasps comprise many species, which range in size from a tiny 1/100 of an inch to about 3/4 inch long. Parasitoids, those that kill their hosts, tend to be specialists, with each species of wasp targeting a specific host. A very visible sign of the presence of one particularly helpful type, the braconid wasp, is a tomato hornworm with dozens of white silken cocoons attached to its back. However, if you look closely,there are other subtle signs of various kinds of parasitic activity in the garden. Mummified aphids, dark-colored whiteflies, and swollen, limp cabbage loopers may each indicate the presence of a parasitoid. Female wasp parasitoids seek suitable host insects into or on which they lay their eggs. The parasitic larvae then feed on the host, ultimately killing it.

Parasitoids can make a substantial contribution to the wellbeing of your garden, so it makes sense to attract them with nectar-producing flowers. Two large families of plants that make excellent lures are the carrot family and the sunflower or daisy family. Choices within these groups are many: dill, cilantro, eryngium, parsley,asters, goldenrods, and sunflowers are just a few. By planting annual and biennial flowering plants right in the vegetable garden, and perennials along the borders, you can attract parasitoids when and where you most need them.

4. Lacewings – How they Help

Lacewings are generalists, and help control a number of different insects. You might see the adults flying around your outdoor lights at night. Poor fliers, they feed on pollen, nectar, and honeydew (the sugars that aphids and other sucking insects exude from plants). Though some adults feed on prey to a limited extent, it is the larvae who do the lion’s share of the work. In fact, lacewing larvae are sometimes called “aphid lions” for their extremely carnivorous appetites. Sickle-shaped jaws allow them to pierce the bodies of not just aphids but insect eggs, thrips, mites, mealybugs, immature whiteflies, small caterpillars, and other soft-bodied insects, and suck out their juices.

Plant flowers that allow easy access to nectar. Generally, the same plants that attract parasitoids—those in the carrot and sunflower families—will nourish lacewings as well. And don’t be too quick to soap-spray your aphids; give beneficial insects a chance to find them. Studies have shown that spraying aphid-infested plants with a homemade honeydew(1 tablespoon sugar per cup of water) can help increase visits by lacewings and lady beetles.

5. Lady Beetles – How they Help

Lady beetles(commonly known as ladybugs) found in the garden are primarily aphid predators. And that’s a good thing—aphid populations, if unchecked, will quickly build to damaging numbers on lettuce and other vegetables! Fortunately, populations of lady beetles tend to synchronize naturally with those of their sap-sucking prey. Both the adults and the larvaeof the beetle have voracious appetites. Larvae look like small, elongated, spiny orange and black alligators, and feed for a couple of weeks before pupating and emerging, after a few days, as adults. Adult lady beetles will only stick around if their prey is still present. Otherwise, they will fly away in search of another patch of aphid-infested greenery on which to lay their eggs.

Ladybugs loveaphids, so the wise gardener will have a little tolerance for minor aphid infestations. Given time, their predators will likely find them. Ladybugs also love buckwheat flowers, but a study showed that they tend not to migrate from a perimeter buckwheat patchinto the garden. A better option is to locate your garden within a couple of miles of a natural forest or field if possible. Or, on your own property, provide habitat by growing a diverse population of plants, including trees and shrubs, and especially flowers.

6. Tachinid Flies – How they Help

The tachinid flies are an important group of insect parasitic flies, with over 1300 species in North America. Some species can easily be mistaken for houseflies, while others have prominent bristles. Theyare effective against a number of pests, including Japanese beetles, squash bugs, sawfly larvae, and many types of caterpillars. Some lay their eggs on leaves to be eaten by caterpillars, and others insert eggs directly into or on the outside of the host. Either way the result is the same: the eggs hatch and the maggots develop inside the host, killing it.The most obvious sign of tachinid fly activity may the presence of oblong, white eggs glued to the top of the head or body of a host insect.

Most adult tachinid flies feed on nectar and pollen, especially from plants in the carrot, sunflower, and mint families. Attract them in the same way as you would parasitic wasps, with a diverse planting of flowers and herbs. The flies will also feed on aphid honeydew, so planting a non-crop plant to attract aphids to your garden, such as nasturtium, can help to support them.