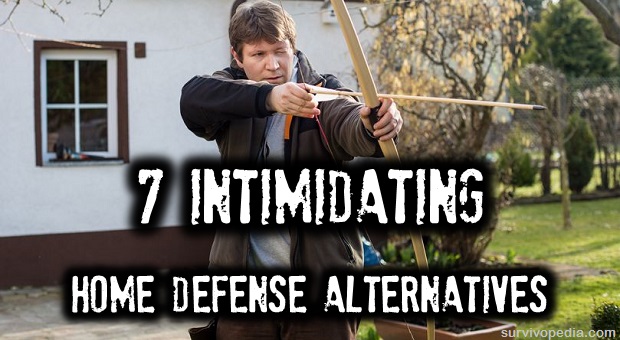 At the time of this writing, our Second Amendment rights to keep and bear arms are under serious attack. Obama and others have vowed to take our guns away, supposedly making the world a safer place. In reality, it’s not about making anyone safer, it’s about giving them total control.

Mankind was killing one another long before the invention of the firearm. Ever since man first realized that sticks and stones could hurt, they have used anything they could find as a weapon.

There are choices to be made, but don’t rely on Hollywood movies when estimating what using them means. Learn your limits, as it takes a lot of skills and practice to use them for your defense.

Bows were the most common distance weapon in use throughout the world for centuries. There are many things to like about bows, as they are lightweight, accurate and can shoot a fair distance. With practice, one can become extremely accurate with one and even learn to shoot it rather rapidly. On top of all this, they have the advantage of being a silent weapon: other than the “twang” of the bowstring, there’s nothing to hear.

Related:Tips for Bow Hunting for Survival

I personally like bows and if I were to find myself in a situation where I felt it was necessary to leave my home and go hunting for adversaries, I would probably pick a bow over a rifle. To me, the advantage of being able to attack my enemies silently, without them knowing where the shots are coming from, surpasses the superior firepower of the rifle. Of course, I would take a sawed-off shotgun and a pistol with me for close work.

Most bow hunters will only use a bow to kill game at up to 40 yards, although the bow itself will easily kill out to double that distance. That makes it possible to use a bow for most outdoor home defense scenarios, although it isn’t anywhere near as effective for use as an indoor weapon. The amount of space one needs for drawing a bow makes it almost impossible to use it effectively indoors.

If you choose to buy a bow for a secondary weapon, then practice, practice, practice. You can’t get good with a bow anywhere near as fast as you can with a rifle or even a pistol. This is a weapon which requires much more skill to use effectively; but with that skill, it can be quite effective.

Knives have a great psychological impact on an adversary. Something about looking at a sharp piece of steel in an opponent’s hand, knowing that it might be residing in your guts in a few minutes, is enough to make even the stoutest of heart waver. Even so, using a knife effectively as a weapon is difficult. Unless you have had extensive training, don’t think you can use one to defend yourself.

Having said that, I still recommend having a knife. When everything else stops working, that knife might just take out your last adversary. Besides, there is nothing you would need more if you find yourself in a disaster situation: you’ll need it for catching and preparing food, building a shelter or making your way out.

Related:Three Excellent Survival Knives for Under $100

For a knife to be effective as a weapon it needs to be the right knife and it needs to be used the right way. True fighting knives are much different than hunting knives, which are single bladed, although some are sharpened partially down the back side.

The best fighting knives are double-bladed, being sharpened down the whole of the back edge. This type of knife is known as the Fairburn, named for its inventor, Bruce Fairburn, who came up with the design while serving in China. The advantage of the Fairburn style knife over other styles is the ease of penetration that it offers. It can also cut in both directions when slashing. These may seem like small differences, but in an actual knife fight, they can be enormous advantages.

True knife fighters always hold the knife low, with the point of the knife upwards. Stabbing someone from above is another Hollywood invention. The human body is fairly well armored for protection from stabs that come from above. Between the shoulder bones and the ribcage, the most that a stab from above can do is muscle damage. On the other hand, the human body has almost no natural armor from stabs from down low. You can much more easily stab an enemy in the gut, causing serious damage, by stabbing from below.

Never try using a folding knife for a self-defense weapon. There’s too much of a chance of it folding on your fingers, hurting you instead of your assailant. Even lock-blades can’t be counted on, as there is always the possibility of accidently triggering the lock.

Throwing knives has a lot of sex appeal, mostly because it’s showy. However, as a means of self-defense, it doesn’t hold much value. Hollywood has always shown victims who were attacked by a throwing knife as being hit in the chest or the back. Once again, the body’s natural armor comes to the victim’s aid. Considering how a throwing knife flips when it is thrown, it’s almost impossible to penetrate the rib cage with one.

I learned how to throw knives years ago, thinking it would be useful for self-defense. That was before I realized how hard to target a human body really is. The only place that it would be effective to hit someone with a throwing knife would be the lower abdomen, hitting the stomach from the front, or the kidneys from the back. This greatly limits the utility of a throwing knife.

A sword can be a fearsome weapon in the hands of someone who knows how to use it. Of course, in our modern world, there are very few people who have any idea of how to use a sword effectively. Unless you are a member of the Society for Creative Anachronism, you have probably never held a real sword in your hands, let alone tried to hit an opponent with one.

Learning how to use a sword requires even more practice than learning how to use a bow or knife. Having said that, if I was up against an opponent armed with a knife, I’d rather have a sword in my hands. The greater reach of a sword does hold some advantage over a knife.

Using a sword requires an incredible amount of upper body strength. The soldiers of olden times, who were limited to the use of the sword, instead of an assault rifle, had to be incredibly strong, especially to manage to wield a sword for an entire day’s battling. Unless you are much stronger than I, you won’t be able to use a sword for a prolonged engagement.

For most people, knives, swords and other such weapons are actually more of a liability than they are an asset. Their lack of ability to effectively use these weapons means that they are ineffective against their enemies. On top of that there is always the risk that the enemy can take the weapon away from you and use it against you. For that reason, avoid these weapons, except as a last resort, unless you have the time and resources to train in using them properly.

This category of weapons are referred to as “melee weapons” and can include anything that can be put on a stick, including axes and maces. The really great thing about this category of weapon is that it really doesn’t require any training. Simply grab what’s available and start swinging.

While you’re not going to accomplish much against a pistol-wielding bandit with an axe or stick, you will against one who doesn’t have a firearm. I saw an interesting demonstration once, done by people who were experts in the use of medieval weaponry. One man with an axe was able to hold off four men armed with swords. His advantage was that he could just go wild with that axe, while his opponents needed to look for an opening in which to attack.

If it comes down to the point where an intruder gets into your home and comes at you, while you’re unarmed, grab whatever is at hand and start swinging. If he’s got a gun, you’re not going to do real well, but if he’s got a knife, you’ve got the advantage.

Throwing stars, more properly called “shuriken” are another weapon that Hollywood has glamorized. In the movies, people get killed by expertly thrown metal stars, thrown by some martial arts expert or other. In reality, it’s almost impossible to do more than cause a scratch with one.

The shuriken was invented as a distraction weapon. In other words, to distract someone long enough to run away. If a ninja was caught in the act, they would throw a couple of shuriken at whoever discovered them, and dive through the closest window to make their escape. Used in that way, they are highly effective.

The other problem with shuriken is that it takes a lot of practice to become proficient enough to use them effectively. Having experimented with them, I know how hard it is to throw one accurately. If you’ve only got seconds to act, it’s better to fill your hand with something that’s going to be able to do your adversary some real harm.

Most of the martial arts weapons started out as tools. In ancient times, farmers and artisans were forced to figure out how to use these tools as weapons, as they were denied ownership of any real weapons. Used by an expert, they can be very effective, but used by an amateur, they’re a good way of getting yourself hurt.

These weapons require lots of training and practice to use effectively. Swinging a pair of nunchuku (commonly called “nunchucks”) around to impress your friends isn’t going to prepare you to use them against anyone who manages to break into your home. When that happens, you’re more likely to hit yourself in the head, than you are to hit them.

Having anything in your hand is better than having nothing. Unless you are so highly trained in martial arts techniques that you can kill a person with your hands alone, you’re better off using almost anything, including these cold weapons. And if you have to chose one, do it wisely, according to your skills and abilities.

This article has been written by John Gilmore for Survivopedia.

John Gilmore is an army Vet, specialized in wilderness survival. Now he lives with his wife and 2 daughters on their farm close to Arizona. He has instructor level credentials and skills in various survival disciplines. He is an enthusiastic DIY expert, self-reliant and a proactive defender of our Constitutional rights. He strives to make a positive mark in this world and that’s why he’s writing for Survivopedia, using a pen name to protect his real identity.

Keeping Your Guns At The Ready – Do’s And Don’ts