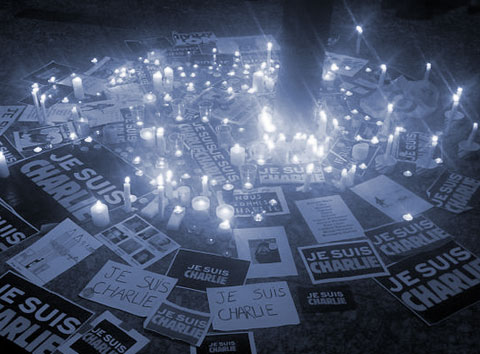 Then, President Bush responded by stating, with bravado, that they attacked us because they hate our freedoms.

This time, the attack against the publication of satirical Mohammed cartoon, was not only an act of terrorism, but an attack on the spirit of free speech.

And the government response this time? After staging a photo op of world leaders, various heads of state have proposed new waves of surveillance and repressive attempts to ban encryption and violate the freedom of speech in communication devices through new spy policies and laws.

On Sunday, as more than 3 million people flooded the streets of Paris in support of the free speech principles that Charlie Hebdo embodied, a group of 12 European ministers issued a joint statement calling for internet service providers to more swiftly report and remove online material “that aims to incite hatred and terror.”

Establishing a framework to enhance police work and intelligence sharing concerning the actions of alleged terrorists and extremists, the joint statement from 12 European ministers and U.S. Attorney General Eric Holder declares the intent to: “counter violent extremism” and “fight against radicalization, notably on the Internet,” in part through the “swift reporting [and removal] of material that aims to incite hatred and terror.” Meanwhile, it aims to beef European border control, “step up the detection and screening of travel movements” and enhance law enforcement, particularly in “working to reduce the supply of illegal firearms throughout Europe.”

Although the statement takes a vow of respect and “scrupulous observance of fundamental freedoms, a forum for free expression, in full respect of the law,” it doesn’t hold much water with the focus on new surveillance and police powers to chill free speech in the name of fighting radicalization. It seems the terrorists have once again won before the fight has even begun.

The irony should be perfectly palpable, but instead leaders in Europe and the U.S. seem oblivious to the fact that they are, pound for pound, violating many more rights than the terrorists ever could… yet they are not exactly stopping and catching terrorist either. (As a side note, in case the Europeans don’t know, Eric Holder is a pretty poor partner in the effort to reduce the supply of illegal firearms, since he was caught deliberately arming Mexican drug cartels in the Fast and Furious scandal).

The spirit of freedom is hardly embodied by the leaders of the so-called “free world.”

“The mainstream media immediately decided that the shooting was an attack on free speech. Many in the US preferred this version of “they hate us because we are free,” which is the claim that President Bush made after 9/11. They expressed solidarity with the French and vowed to fight for free speech. But have these people not noticed that the First Amendment is routinely violated by the US government?”

“Another lesson from the attack is that the surveillance state that has arisen since 9/11 is very good at following, listening to, and harassing the rest of us–but is not very good at stopping terrorists.”

Specifically, France has already proposed new terrorism-surveillance laws – despite have just passed legislation for new powers in November – while the Anglo power are meeting to ramp up security and UK Prime Minister David Cameron has proposed ridiculous and draconian powers to breach encrypted communications.

Unfortunately, it is par for the course. Problem-reaction-solution.

Quite often, when attacks happen, fear sets in, and forces antithetical to freedom set in, attempting to control and ‘protect’ society, failing profoundly while trampling over society’s most cherished values. America lived through an entire decade of this nightmare after 9/11. Jillian York, of the Electronic Frontier Foundation, commented:

“Nearly every major terrorist attack in the past couple of decades has been followed by new legislation of some kind. France just pushed through new anti-terror regulations in November, and the [prime minister] is already saying that more will be necessary. Where does it stop? These politicians haven’t demonstrated the need for more surveillance, yet it’s always their go-to ‘solution.’”

“Mass surveillance doesn’t only infringe on our privacy, but also our ability to speak freely. The knowledge, or even the perception of surveillance, can prompt writers to think twice before touching upon a given issue.”

It seems that, egged on by the horror of terrorism, all the governments are capable of doing is more spying, surveillance, invasion of privacy and repression – even though it clearly doesn’t work. From the Verge:

“[I]nstead of trying to address problems with the existing expansive surveillance powers, governments merely see these crises and fearful times as an opportunity to simply to ask for more,” Mike Rispoli, spokesman for the London-based watchdog Privacy International, wrote in a blog post Tuesday. “Short of creating a society in which thoughts themselves are monitored and controlled by the State, no amount of surveillance powers endowed upon our governments can ensure that all acts of fanaticism and violence can be predicted and prevented.”

UK Prime Minister David Cameron actually proposed banning encryption as a response to the Hebdo Charlie attacks – and caught a wave
of criticism from the tech savvy who now run the consumer and computing world.

Prime Minister David Cameron said the government should be allowed to read encrypted messages on smartphone apps like WhatsApp and Snapchat, adding that the Paris attacks proved the need for greater government access. Experts say an outright ban on these apps wouldn’t be wise or even feasible, but privacy advocates say Cameron’s comments speak to larger, more troubling trends.

Chastised as being both ‘draconian’ and ‘dim-witted,’ Cameron’s proposed policy is noted as both “ill-thought out and scary” at the same time – a true governement mix of “idiocy” and “draconian.” Cameron stated in his speech:

“In extremis, it has been possible to read someone’s letter, to listen to someone’s call, to mobile communications,” Cameron said. “The question remains: are we going to allow a means of communications where it simply is not possible to do that? My answer to that question is: no, we must not.”

As the Guardian reported:

Independent computer security expert Graham Cluley said: “It’s crazy. Cameron is living in cloud cuckoo land if he thinks that this is a sensible idea, and no it wouldn’t be possible to implement properly.”

Encryption is the backbone of security that allows modern banking, commerce and communication in the digital world.

Encryption is what protects your private details when you send your bank details to a server. It’s required for governments and companies when they store customer information, to protect it from hackers and others. And it’s built right in to whole hosts of messaging applications, including iMessage and WhatsApp.

Tech firms are obviously not going to do business without encryption, so they are instead making preparations to leave the UK if this becomes policy, or likewise, to stop doing business in the UK if British laws would keep global firms from operating as usual.

Eris Industries, which uses open-source cryptography, has said it is already making plans to leave the UK if the Conservative party is re-elected with this policy in its programme.

It is true that terrorists use encryption, much as in real life they use bank accounts, locks, money transfer services and public transport. If the presence of terrorists on a given service is reason enough to shut it down, we’ll find there’s really no form of civil society left to defend.

“We must avoid knee jerk reactions,” said Graham. “In particular, I am concerned about any compromising of effective encryption for consumers of online services.”

“Cameron’s plans appear dangerous, ill-thought out and scary,” said Jim Killock, director of the Open Rights Group. “Having the power to undermine encryption will have consequences for everyone’s personal security. It could affect not only our personal communications but also the security of sensitive information such as bank records, making us all more vulnerable to criminal attacks.”

Wow… that is some civil liberties blowback. Enough to take us back a few notches in the Internet era and make a visit to the dark ages.