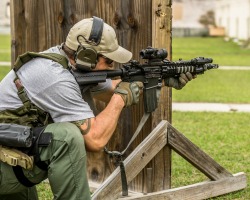 If you own and use an AR rifle platform as a primary SHTF weapon, then you need an AR magazine strategy.   Have you ever seen so many options for ways to feed a rifle than with the vast varieties of AR magazine configurations?  You might think you were being made even more confused than just trying to pick all of the AR rail accessories on the market these days.  The whole idea is to customize your SHTF rifle to fit your exact response needs.  It does not matter the reason you use your AR either.

Maybe you just like to punch paper targets or bleeding zombie foam targets.   More and more prep hunters are using ARs for varmint hunting, predator control, or even larger game hunting like whitetails or even bigger game.  There are multiple law enforcement applications, professional security, or even home or ranch security and protection.  AR use has multiple purposes and thus the fire control supply systems need to be managed, too.  Like so many other things, this issue is part of prepper planning, too. mechanism of the rifle.  These cartridge holding implements come in a variety of configurations, capacities, construction materials, colors, and other design features and functional options.  But, basically they all work the same way for the same purpose.  Typical factory “mags” are either of a metal or polymer manufacture.  There are AR magazines made of steel and even more commonly aluminum.  You’ll notice the ever so slight differences in weight when you handle and load them.  Steel mags can rust and thus require more attention to maintenance issues.  Even stainless steel mags need attention.  Aluminum magazines can bend or dent more easily especially around the crucial feeding lips at the top of the magazine opening where ammo rounds are inserted.  Regular inspections are needed for all magazine fed firearm systems. or hard, tough ABS-type plastics.  The most prolific brand on the market today that readily comes to mind are the magazines made by Magpul.  These are now made in the great state of Wyoming having moved from Colorado for political reasons.  Way to stand up for your principles Magpul.  Magpul magazines are well made, feature a snap off dust cover and are virtually indestructible.  They can also be fitted with factory Magpul Ranger floorplate “snatch” finger grabbers in place of the standard floor plates for easy magazine extraction from the rifle.   These come in 20 or 30 round capacities and are available in various colors besides standard black.

Well-functioning aluminum magazines also come from Brownell’s In Iowa.   I have several of the earth tan color 20-round metallic mags I use exclusively for hunting ammunition.  This is so I can instantly tell those magazines from the black Magpul ones I load with personal and Bug Out personnel and property defense rounds.  I am not certain these tan mags are still available, so I added a number of 20-round Magpul magazines in O.D. green as supplemental replacements.  This is all part of the AR magazine management plan as well in terms of keeping different types of ammo applications separated for easy access as shooting tasks change.

Under normal everyday use by the average AR prep shooter a magazine could last indefinitely if maintained and cared for,

properly stored and carried reasonably protected.  LE users and others like military applications are more likely to see cause and affect damage to magazines beyond reliable use.  Care for your magazines, but inspect them regularly and toss ones that fail to function properly.  Though one might not expect prepper use of an AR magazine to be abusive, remember these are mechanical devices and such things do wear out and fail.  Be sure to check the magazine lips and the followers (the plastic piece just inside the top of the magazine that sits on top of the magazine spring) for cracks, wear, or damage.  The follower and spring should be free to move up and down as rounds are inserted or removed.

On most AR magazines the bottom plate can be removed, so the spring and follower can be taken out.  Use care when removing the plate as the spring is under pressure and will pop out.  The metal spring can be wiped down with solvent and lightly oiled, but don’t overdo it because oil attracts dirt.  Wipe down the inside of the magazine body.  If a magazine continues to misfeed or fails to function properly in loading, unloading or feeding rounds to the rifle, then the spring can be replaced.  Honestly though with magazine prices being fairly inexpensive again right now, it is perhaps more prudent to just replace ones that continue to act up.  Keep the old parts for emergency replacements if they are useful. self-contained types.  There are also 60 and 100 round magazines on the market like the Surefire, which are of a double-stack type.  Rotary feed magazines like the Beta 100-round dual cylinder magazines are popular, too if heavy firepower is needed.  Another rotary choice is the X-Products X-15 magazine.  These are high quality and reliable.

In most cases I wonder if there is ever a real need for an AR magazine to have to hold more than the traditional 20 or 30 rounds, but that is a personal prepper decision.  Just make sure whatever magazines you buy to use that they function reliably in your rifle(s).  Consider too, the practical issue of the weight of a loaded magazine holding more than 30 rounds being attached to your rifle.  It may require some shooters to make some extra trips to the shooting range in order to train on using heavier loaded magazines, as the added weight will undoubtedly impact the shooting characteristics of the rifle.  Think about carrying these heavier magazines in the field, too.  Some high capacity magazines can be more tedious to load, too and can wear out the thumb and fingers trying to insert rounds into the ever more compressed magazine spring.  There are a variety of magazine assist loaders on the market and one of these would make a good investment not only for speed, but also for the fatigue of loading multiple magazines.

AR magazine storage is not rocket science, but some common sense needs to be used to keep them in dust free environments secure from prying eyes and fingers.   Climate control issues should be considered, too, keeping loaded mags (and boxed ammo) in cooler storage areas for long term protection from contamination or deterioration, as well as security.

Loaded mags are easily kept in storage “crates” like Rubbermaid boxes, or Plano Sportsman Storage Containers, snap lock gear boxes (that can be padlocked) or MTM Case-Gard AR Tactical Magazine tote ammo type boxes.  I like the Case-Gard boxes with the foam magazine inserts to keep things organized, safe, secure, and clean.   These have a gasket seal in the lid that helps keep out undue moisture, dust and dirt as well as strong securing latches.  The grab handle makes them great for a Bug Out.

I use the Plano boxes for long(er) term storage in a locked room keeping unloaded backup magazines, or satchel totes as well as extra loaded mags that might be for a rifle/caliber that are not for my primary SHTF weapons.  I have a second box for keeping loose magazines that are loaded for my primaries.  Even these crate boxes can be “grabbed” quickly for a speedy departure, but they are more intended as the mother lode to supply other grab totes.  Likewise I keep 2-3 of the Case-Gard tactical mag totes ready to go at all times with defense loads.  I can grab one of these quickly to put in the “escape” vehicle and I am down the driveway to the backup Bug Out camp if the Bug In scenario seems to be collapsing.

Bug Out Toting and Personal Carry

There is no hiding the fact that I am a magazine carry pouch fool.  I am a lush for a new nylon or canvas magazine pouch and I have multiple types, colors and configurations.  Perhaps it is just because I am indecisive about such things.  I like lots of magazine carry options. Every prepper will need to decide how they will best and most comfortably carry multiple magazines in the field while hunting or on patrol or for carry/access in a vehicle or perhaps on an ATV/UTV.  Access is the key term here.  You have to be able to get to your magazines quickly and efficiently when needed, particularly when under pressure to do so.
I have the types that can be carried on the belt, but those tend to be a drag on the pants.  I much prefer the satchel type with a strap to carry over the shoulder or across the chest.  The ones I have carry three loaded magazines at a time which is usually enough with more carried in the pickup or on the ATV at camp.

Though they are very popular these days, I do not personally like the military or LE type vests that carry multiple magazines on the front of the chest.  I simply do not like my arm and torso movements restricted by wearing a vest garment.  You may decide it is the perfect item for your method to carry magazines.  Whatever works best is best.  I also have a number of magazine pouches from Blackhawk and Brownell’s that are just simple sleeves with Velcro flap closures.  These are easy “grab and go” pouches for security and protective storage and carry alone or in containers.  So, regardless of your SHTF long gun weapon(s) of choice either an AR or an AK or something else, there needs to be considerations for magazine selection, use, maintenance, storage and carry.  It’s all part of a comprehensive magazine management strategy.

The Six Laws of Survival: Strategies For Beating the Worst Case Scenario