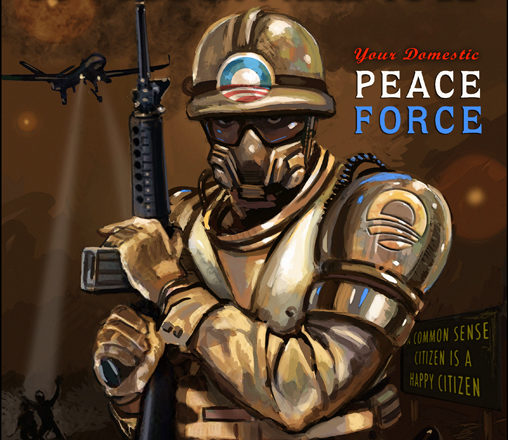 Speculation abounds surrounding the 2 billion rounds of ammunition purchased by the Department of Homeland Security and other national alphabet agencies in recent years. Moreover, as the White House and their cohorts in Congress contemplate the disarming of American citizens, the very assault weapons purported to be so dangerous in the hands of law abiding gun owners are being purchased in mass quantities by local and federal law enforcement agencies.

So what is the purpose and motivation behind the government’s continued efforts to stockpile so much firepower?

One frightening theory could explain what the President and his national security apparatus are up to.

Many of you will remember a story I broke a long time ago – about presidential candidate Barack Obama’s little-noticed announcement that, if elected in 2008, he wanted to create a “civilian national security force” as big, as strong and as well-funded as the Defense Department.

Here’s what he actually said at a campaign stop in Colorado July 2, 2008:

Could what we see happening now in the Department of Homeland Security be the beginning of Obama’s dream and our constitutional nightmare?

But that brings us up to 2013 and the highly unusual stockpiling of firearms and ammo by Homeland Security – firearms and ammo that Obama would like to deny to ordinary citizens who are not members of his domestic army.

Well, I hate to say it, but I may have predicted this, too.

In a Halloween column last fall, I stated that, if re-elected, Obama would “declare a full-scale war on his domestic opposition.”

I wasn’t joking. I was deadly serious – so serious, in fact, that I did something I pledged I would never do: Vote for Mitt Romney. It was a matter of self-defense and self-preservation. I said then that a second term of Obama might mean we would never see another free and fair election in America. (I’m not even sure we saw one in 2012.) I suggested due process would go the way of the horse and buggy. I said I expected Obama would move to shut down or destroy all independent media. I even speculated that his biggest critics would eventually be rounded up in the name of national security.

Why does the civilian Department of Homeland Security need billions of rounds of ammunition?

This is the agency that is responsible for policing the border. But it doesn’t.

This is the agency that is responsible for catching terrorists. But it doesn’t.

So why does Homeland Security need so many weapons and enough hollow-point rounds to plug every American six times?

Excerpted from Josefph Farah of WND

As for concern about the type of bullets — hollow points, which expand upon impact — the statement said the type is “standard issue” and is used during “mandatory quarterly firearms qualifications and other training sessions.” (link)

While the majority of Americans will take this explanation at face value, there are some key facts that suggest the Department of Homeland Security is mobilizing for a significant future action against the American people.

These are but a few examples of what our government has been up to. There are hundreds of others.

Now put all those together and the complete puzzle begins to emerge.

This surveillance infrastructure and control grid are being designed not for foreign terrorists or rogue nations that may do harm to America. They have been designed for you.

You, my fellow American, are the enemy.

What Does the Threatened M855 Ammo Ban Mean to Preppers?

Build Your Own Rifle