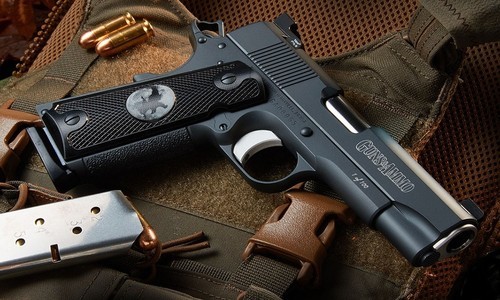 As the economic crisis has worsened over the last several years we have made it a point to inform our readers about the possibility of a system collapse so severe that the regular flow of commerce comes to a screeching halt. Planning for such a far-from-equilibrium scenario, which may very well involve the collapse of a nation’s currency, requires that we consider alternative monetary vehicles to help us get through tough times. In What is Money When The System Collapses? we outlined several supplies that would become essential in a post-collapse world. Thing like food, water, gas, and clothing would become necessities not just for your personal use, but as barterable assets.

We’ve always advocated investment into precious metals like gold, and especially silver in “junk” form, as these will likely be some of the few recognizable emerging currencies if the worst were to happen. Another asset class that will likely experience a boom in a post-collapse world is guns and ammunition.

If there’s one thing you may have noticed about guns and ammunition over the last ten years, and especially since the economic and financial collapse of 2008, it’s that prices for these assets have steadily risen. Some may suggest this is a side effect of inflation, and while we won’t disagree that inflation has played a part, it is only a symptom of a deeper, more fundamental issue that is driving the value of these assets to historical highs.

The people have lost confidence in the government’s ability to mitigate this crisis and they have no trust that government officials have their best interests at heart. Recent developments on financial, economic, and political fronts have left aware and responsibility-minded Americans with no choice but to take their financial and physical security into their own hands. As a result we’ve seen sustained multi-year growth growth in the value of traditional wealth preservation assets of last resort like gold and silver. Moreover, and quite telling of the lack of trust the American people have in their government, there has been an unprecedented growth in the number of Americans investing in non-traditional stores of wealth that include assets like guns and ammunition.

For many, guns and ammo are the new gold and silver. Historically these assets have retained or increased their value, while also serving a practical purpose for post-collapse emergency preparedness planning.

Some of the fear-based psychological reasons for gold’s popularity in times of economic crisis appear to be similar to the reasons cited for purchasing guns and ammunition.  Michael Thompson, a small business owner from Virginia, had this to say about why he recently purchased 2,000 rounds of 223 ammunition to go with his growing collection of AR-15 assault rifles: “Since ARs are so well-known & widespread, quality ones don’t really go down in value.  I don’t trust what’s going on in Washington and a reliable firearm that’ll hold it’s value plus ammo that I can always re-sell later if I don’t use it up seems like as safe a place as any to put my money in these uncertain times.”

Dustin Ramsey, a 28 year old self-proclaimed “realist” from Tennessee who says hunting and fishing are two of his favorite outdoor activities, counts the 5,000 rounds of 9mm ammunition he keeps on-hand as one of his investments along with gold coins: “I’m a hunter so I know I can use my guns & ammo to feed my family if something happens to our usual food supply and there’s a run at our grocery store. Plus, it seems like somebody on Wall Street is always getting bailed out nowadays and my faith in the stock market has been gone for a long time. Look, I’ve seen what happens when times get tough and I figure I can always barter a popular caliber like 9mm for other supplies like I would with gold if push comes to shove. And if a crisis never materializes where I need my stash of ammo, I still love to shoot so those bullets won’t go to waste. Given the uncertainty in our world, ammunition seems more practical to me than gold, whether there’s an economic crisis or not.”

The following fact sheet (via Ammo.net) offers some compelling statistics for the viability of guns and ammunition as investment and/or wealth protections vehicles:

Firearms and ammunition may not be a typical investment asset for most, but considering the growth we have seen in the last decade, many more Americans are turning to them in times of uncertainty, crisis and distrust. We have yet to see our government make any significant changes to our economic policies, regulators continue to ignore the fraudulent activities and outright scams in financial circles, our currency is under threat of losing its world reserve status, more Americans than ever require government assistance just to put food on the table, and our liberties are being progressively restricted on an almost daily basis.

Given the reaction to these circumstances thus far, it should be apparent that for those looking to protect their wealth, as well as their lives as crime and violence rise, guns and ammunition may be an excellent egg to add to the diversification basket.