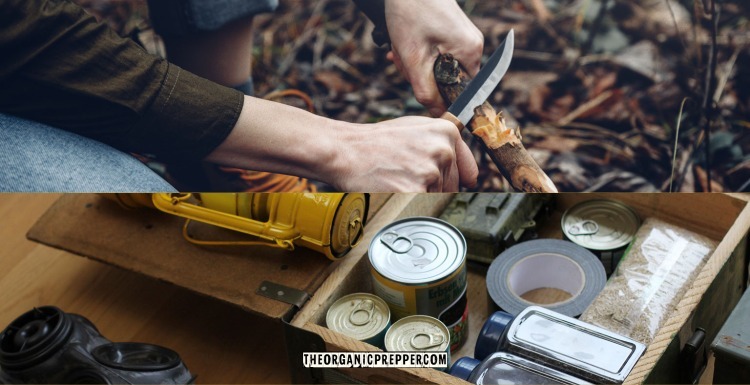 A lot of people have preconceived notions about the differences between preppers and survivalists. A lot of you who read my site at Graywolf Survival know what a survivalist is, but today, I thought I’d give you an idea of what I think a prepper is.

Much of what people think about survivalists or preppers is due to television shows, movies, and the media. Unfortunately, a lot of those descriptions and characterizations are either developed by people who have no actual knowledge of either discipline, or worse – they distort the ideas to get better ratings or more page clicks.

While everybody’s idea of the differences between preppers and survivalists will differ, I think I’ll give you a fairly fair shake here. I’ve spent several decades working in both the military/government and civilian sectors in many different urban and rural environments including jungles, deserts, swamps, war zones, and politically-sensitive areas. Based on these experiences, here are some of my thoughts on the matter…

What is a survivalist?

The public perception of a survivalist has changed over the years. The media portrayal of people like Eric Rudolph, Troy James Knapp, and Ted Kaczynski gave the term ‘survivalist’ a bad name. For many years, the idea that you were a survivalist meant that you were some crazy loner who lived up in the woods, eschewing society as a hermit.

Luckily, people like Ray Mears, Les Stroud, Mykel Hawke have shown that these skills are valuable to “normal” people, and that you don’t have to be an anti-social lunatic to learn and practice them.

To me, a survivalist is someone who spends a great deal of time learning and practicing primitive skills in order to be able to survive natural threats such as exposure, starvation, predators, and dehydration, in many different wilderness environments. Not all survivalists spend their time focused solely on wilderness survival, however. Some spend a great deal of time learning how to deal with urban threats or combat scenarios.

As a whole, these are the traits generally attached to survivalists:

So, what is a prepper?

The show Doomsday Preppers has been both a blessing and a curse for people who consider themselves preppers. On one hand, the show got people to realize that they’re not the only ones out there who realize that there are real threats in the world and want to be prepared for such. On the other hand, the directors of this show hand-picked those who were eccentric and then sensationalized the shows via editing, making some of these “contestants” seem like complete lunatics.

Contrary to what the show depicts, most preppers aren’t fixated on just one major disaster they’re convinced will wipe out humanity. Don’t get me wrong, there are definitely some out there that believe some crazy things, but I believe they’re just a very small minority. In my experience, most preppers are sane, logical people. People who see  potential problems and want to do something to protect their family.

When I think of someone who’s a prepper, I think of preemptive action

It’s a man who values his independence – not wanting to be forced to beg help from others. These threats include “trivial” short-term annoyances, such as the power being out for a few days. Some threats involve criminal activity, such as home invasions. Even ensuring economic security for your family is a form of prepping.

Other larger (yet “normal”) threats include fire, floods, earthquakes, riots, tornadoes, hurricanes, and so on. These threats can cause a lot of destruction in a small or even regional area.

And then there’s the big stuff – infrequent, devastating concerns such as Ebola, EMP, war, etc. – things that could cause a longer term degradation in what society offers. These are also threats preppers prepare for. In any of these scenarios, supplies such as food, water, medicine, and power are liable to disappear. Threats of violence from starving or rioting people increase immensely as a result.

Also, by preparing for the worst-case scenarios like this, minor inconveniences such as a three-day power outage are already covered. I don’t believe that taking rational steps to deal with a problem means that you’re obsessed with that problem. Are you obsessed with wrecking your car when you put on your seat belt? I don’t think so.

To combat this, a lot of preppers store large (or not-so large) supplies of essential items, such as food, medicine, and gas. Stores are created large enough to (hopefully) last them until those supplies are back in supply. Other preppers grow their own crops or set up self-sustaining aquaponics ecosystems so they can be their own grocery store.

Preppers store water at home and learn how to filter and purify it. They learn self-defense and set up their property with physical defenses. They set up off-grid power systems. They learn primitive survival skills in case they’re forced from their homes, away from the city and have to survive for a time in the wilderness.

They use their skills they’ve learned, supplies they’ve stored, and systems they’ve developed in order to to this with the least amount of external supplies and support.

How do preppers and survivalists compare though?

In developing this article, I asked my Facebook audience what their thoughts were on the differences between preppers and survivalists. The opinions were so varied that some definitions were exactly opposite to others.

Some still see survivalists as loners, and yes, I’m sure there’s a bit of the loner in a lot of survivalists.

Some see the stereotypical view of preppers that the media has presented, in that they are getting ready for The Event while the survivalist is the minimalist.

Some see prepping as the way to deal with a short-term breakdown in society and survivalism as how to deal with the end of the world as we know it (TEOTWAWKI).

Some see preppers as people who hoard supplies and don’t learn anything. Unfortunately, this is often true.

Some see preppers as people who set up plans and supplies in advance of something happening and survivalists who just learn to deal with the basics with whatever they happen to have around them at the time. Essentially, some feel that preppers plan ahead while survivalists don’t have to.

(If you want to plan ahead with your food storage – and you should – check out our Quickstart Guide on how to do so.)

Personally, I think that the two overlap in so many respects that it’s sometimes difficult to really tell them apart. I think they both identify threats, the risks that those threats present, and they both take action to mitigate those threats.I think that there are a lot of survivalists out there who use their knowledge of surviving the wilderness to help deal with surviving when they’re not in the wilderness. I also think that there are a lot of preppers out there who spend a great deal of time learning how to deal with surviving if they’ve lost everything.

Survivalists spend time honing skills and knowledge in advance of being put in a survival situation. To me, that’s prepping. I also believe that preppers spend time analyzing and preparing to survive both urban and wilderness threats. That’s survivalism.

So, am I a prepper or a survivalist?

I don’t really consider myself either, and yet I’d have to say I’m both.

I know several ways to start a fire by rubbing sticks together. Do I do that when I’m out in the woods? No, I use a lighter most of the time.

I know several ways to filter water using natural resources. Do I regularly use those methods? No, I use a Sawyer Mini or LifeStraw most of the time.

While I know how to navigate in many different types of terrain using only a map and compass, do I regularly do that? No, a GPS is simpler and much more accurate.

Some people don’t think you can be a survivalist if you bring a tent, sleeping mat, or any electronics. I bring all three. I’ve spent enough uncomfortable nights out in the swamps, deserts, and jungles that I don’t feel that I need to impress anyone with how I can “rough it.” I like to be as comfortable as I can whether I’m stuck in a remote valley somewhere or sitting at home watching Dr Who.

Some people don’t think you can be a prepper if you don’t have a year’s supply of food and a thousand gallons of water stocked up. I have neither. I have enough to make it convenient if I couldn’t go to a grocery store for a while or if the city water supply suddenly stopped but I know how to find food and water in the area and prepare both with whatever I can find.

I have a go bag of essentials but it’s very small and I use it mostly if I’m helping out the local Sheriff’s Office or heading out into the desert.

I only have a few medical supplies that fit into an IFAK but I’ve had some medical training from the military.

Would I be able to survive if I were dropped out in the woods with just a knife? Probably. I think I’ve learned enough by now from growing up in the woods and what I’ve dealt with overseas to be able to deal with that. Does that make me a survivalist? Maybe.

Would I be able to survive if the sun sent out a huge CME and wiped out the power grid, causing the collapse of society? Probably. I’m quite familiar with the probable ramifications of what would happen and what I’d need to do in response. Does that make me a prepper? Maybe.

So, what’s the final word? Can people be preppers and survivalists?

I love to learn about all sorts of ways to deal with situations because I love being self-sufficient. I also like being able to master a situation and be comfortable in it instead of just barely surviving it.

I think in the long run, if we can get past the stereotypes of what preppers and survivalists are, those who see a big difference will also see that there is a lot that both groups can learn from each other. I don’t really see that there’s all that big a difference.

What are your thoughts on the situation though? Are there other factors to consider between preppers and survivalists? Do you consider yourself a survivalist, a prepper, or both? Let us know in the comments below.

How to Survive World War 3: Prepping for an Off-Shore Conflict