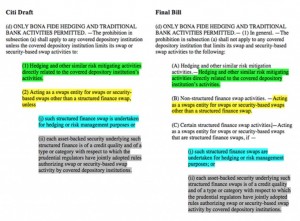 Editor’s Note: As Michael Snyder notes, JP Morgan Chase, Goldman Sachs, Citibank, Bank of America, Morgan Stanley, and plenty of others have manipulated the market with these derivative bets, and have at least $40 trillion in derivatives exposure. If Congress passes FDIC protection for these controversial and complex financial instruments, it could dwarf existing debt held by the federal government and cost taxpayers an absolutely insurmountable sum, all while letting the bankers walk away free, and with their other winnings in hand.

Back in 2011, the Federal Reserve quietly stepped up to the plate to back Bank of America in attempting to park more than $75 trillion in European derivatives exposure in a division covered by FDIC (Federal Deposit Insurance Corporation) loss insurance – meant for ordinary consumers to promote general confidence in the banking system!

Bank of America is shifting derivatives in its Merrill investment banking unit to its depository arm, which has access to the Fed discount window and is protected by the FDIC.

This means that the investment bank’s European derivatives exposure is now backstopped by U.S. taxpayers. Bank of America didn’t get regulatory approval to do this, they just did it at the request of frightened counterparties. Now the Fed and the FDIC are fighting as to whether this was sound. The Fed wants to “give relief” to the bank holding company, which is under heavy pressure.

The FDIC objected, and the deal stalled, but the gesture has been attempted on other occasions as well, and the banks are now seeking to make this a general protection for derivatives at large. This is the ultimate in letting American taxpayers hold the bag, while the real criminals speed off in the proverbial get away vehicle – all with the Federal Reserve in the driver’s seat, mind you.

Wow! The mantra of private gains, public losses has never been more true; meanwhile, the American people are serious trouble if this passes through.