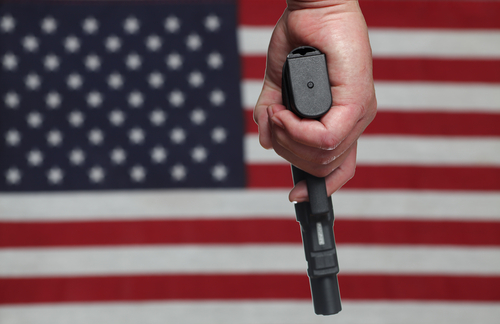 Every summer, Hollywood seems to release another batch of disaster and hero films full of action and end of the world scenarios.

But this film hits much closer to home.

It’s the scenario that could happen here, but Hollywood won’t dare to get behind. Nevertheless, it is coming to (select) theaters.

Director Mike Norris, son of Chuck Norris, is bringing a drama to screen ripped from the headlines of America’s real-life looming catastrophes. In AmeriGEDDON, an EMP attack brings down the grid and initiates the collapse scenario that preppers are all too familiar with: civil unrest and chaos as a result of the loss of food and services, followed by a heavy-handed attempt to impose martial law and confiscate the firearms of American patriots.

What follows is basically the beginning of the next civil war against the agents of world government and global control.

Plot synopsis and details from the filmmakers:

AMERIGEDDON, coming to theaters nationwide May 13, 2016, has been described as “the movie the establishment doesn’t want you to see.” Showing what happens when a not-so-future U.S. government conspires with the United Nations to stage an attack on the energy grid, AMERIGEDDON depicts a country ruled by martial law in which citizens are stripped of their constitutional rights and their guns. A group of patriots fight back and rescue the country from slipping into irreversible chaos.

AMERIGEDDON’s release in an election year is not coincidental. The film illustrates a dystopian future all patriots must guard against and is a call to action to preserve the Second Amendment and stop executive rule by fiat. Director Mike Norris, son of Chuck Norris, asks for like-minded Americans to support the film.

“The fact that a recent poll showed a majority of Americans are enraged with the federal government points to a frenzy of unrest with the dictatorial way in which our country has been run,” said Norris. “My family has long been involved in protecting the rights of Americans. We are concerned about the future and and see this film as a call to action. We urge people to join us in theaters and show Hollywood and politicians that true patriots will fight for their rights and want to see their values represented on-screen.”

A collaboration between Norris and entrepreneur and writer Gary Heavin, AMERIGEDDON seizes on fact-based threats and asks the ultimate question, “What happens when government turns on the people it’s supposed to protect?”

Executive Producer Gary Heavin believes the film’s message warning is timely. “We made a movie that is fun to watch but it is based in reality. In AMERIGEDDON, survivors of an EMP attack on the United States must live in a state of martial law led by the United Nations. American soldiers must decide whom they serve, second amendment rights are curtailed and food, water and survival become our primary concerns—unfortunately, these are all likely scenarios resulting from a very real threat,” said Heavin.  “I believe if we can entertain while we inform, more people will wake up; and if we hope to restore our freedom we must share the truth with as many people as possible.”

This video goes into detail regarding the executive orders and preparations for martial law takeover, and the preemptive moves to nullify the rights of all Americans.

As many know, there is quite an extensive list of ways in which the federal government and the United Nations intend to assert control (and many ways you can stay off their radar and prepare to survive).

The Lost Ways prepares you to deal with worst-case scenarios with the minimum amount of resources just like our forefathers lived their lives, totally independent from electricity, cars, or modern technology whatsoever, which means you’ll also be bulletproof against the ever-increasing threat of an Electro Magnetic Pulse, a Powerful Economic Breakdown, Famines, Wars, and Natural Disasters. You’ll have the power to protect and save your family…even to rebuild your community during the worst times.Watch the video below to learn all about the 3 skills that will help you thrive in any crises situation: