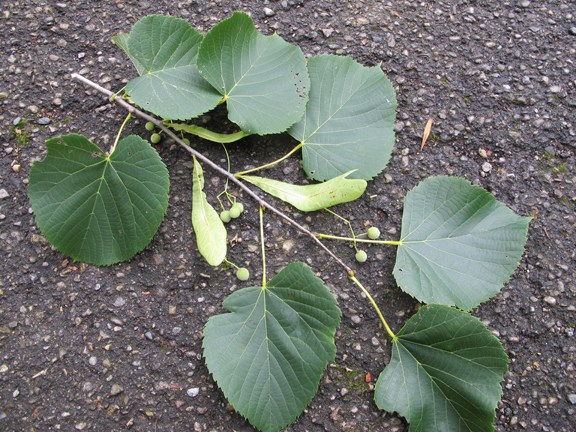 As spring quickly approaches, I’d thought I share with you why the BASSWOOD tree is one of my favorite Survival Trees!

Trees can provide a survivor with elements from all four core survival priorities:  Shelter, Water, Fire and Food.  Trees can be used for warmth, hydration, food, tools and self-defense.  It’s crazy to think that one can use a tree to start a fire, take shelter under it, and then find themselves able to eat and drink from it.  Trees provide an immeasurable number of materials essential to survival, and studying the different species, as well as what they offer, is a worthwhile endeavor that will pay major survival dividends time and time again. 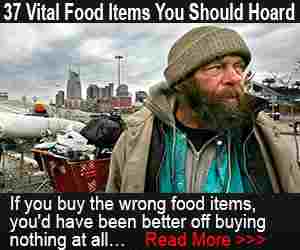 This article is an except from my much more extensive POCKET FIELD GUIDE titled SURVIVAL TREES that will ship (autographed) in the APRIL FORAGER EDITION APOCABOX.  Each tree is accompanied with illustrated drawings of its leaves and (on occasion) other identifying features, such as fruits, nuts, barks, or buds.  The guide (nor this article) is not designed or intended to be a tree identification guide.

Rather, it should act as a supplement to other guides on the subject, offering survival specific information and insight that typically is not covered (or even mentioned) in the average identification guide.

The use of each tree type is broken down into some or all (if applicable) of the following five survival categories: Shelter, Water, Fire, Food, and Tools & Miscellaneous.  The information contained in these categories has taken me nearly two decades to compile, learn, and test.  Yet, I am sure there are still uses and resources for each tree that I do not know.  It is my hope that this article deepens your knowledge and appreciation for the amazing BASSWOOD tree. 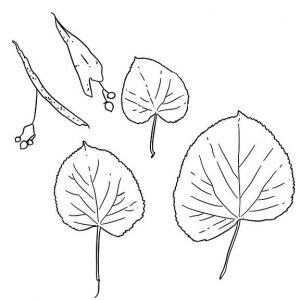 The American Linden, or Basswood, is one of my favorite survival trees.  Not only is it entirely edible, but the Basswood also provides a surprising number of other survival resources.  In Britain, this species is often referred to as the Lime Tree, though it is not the source of the lime fruit. 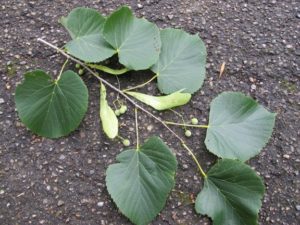 The Basswood tree is not a particularly good tree for shelter.  However, mature Basswoods are notorious for sending up a slew of smaller sucker Basswood trees from their base.  This is one way I am able to identify Basswoods in the winter when their leaves are gone.  These sucker trees are usually very straight, tall, and easy to harvest.  Although not very strong, like oak or maple, they still make great shelter poles if fallen branches aren’t available.  Basswood is a very soft wood and a favorite among wood carvers. Even 2-3” diameter saplings can be cut easily with just a knife.  Consider this option before spending significant calories on a tree of a different variety. 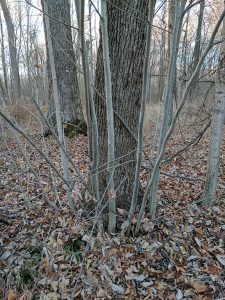 Basswood trees can be tapped just as a Maple can be tapped.  Although not nearly as high in sugar content and not worth boiling down for a sweet syrup, Basswood sap is incredibly refreshing and is one of the fastest sap trees I’ve ever tapped.  Young sucker trees, as well as 1st season growth on branches (1/2” in diameter or smaller), can provide a survivor with a very functional spile.  The centers of these two are very pithy and can quickly be reamed out with a wire or a thin branch with a sharpened point. I’ve used many a Basswood spile while gathering drinking sap from Basswoods, Maples, and Birches.  Friends of mine who make tobacco pipes will often use a young basswood sucker for the tube because of its hollow nature.

The Basswood is also a sign that you are probably near water, as they prefer moist, water-rich environments.  If you’ve found a Basswood tree, keep looking because there is likely a water source close by.

Basswood is not a great wood for extended warmth and heat, but it is without question my favorite wood to use for friction fire kits such as Bow Drill and even Hand Drill.  Basswood, especially sucker trees and 1st year growth branch wood, is the perfect consistency for friction fire lighting.  The light-weight, porous wood generates a nice hot ember very quickly.  Sucker trees at the base of mature trees are my favorite for this, but fallen limbs and branches will work just fine as well.  Regardless, it is one of the softest woods available.  When available, I use Basswood to make both the hearth-board and spindle for my Bow Drill fire kits (see POCKET FIELD GUIDE:  Master the Bow Drill).

Young Basswood leaves are my favorite wild edible green.  I eat a basswood leaf salad at least two times a week from March-May.  When their flowers are in bloom, I will add them to the salad, as they are edible too.  The leaves are very mucilaginous and may pose a texture issue for some.  While edible all throughout the summer, Basswood leaves are best when young and smaller than a silver dollar.  I also like to steep 10 or so flowers in a cup of hot water for 10 minutes to make a fragrant tea that I very much enjoy.

The seeds of the Basswood are edible as well, though, they are time consuming to collect.  They dangle from underneath the leaves in small clusters and are attached to a tongue-shaped bract.  The hard, outer shell must be cracked away to access the edible seed. I simply do this inside my mouth and spit out the hull, although I’ve been known to chew it up on occasion.  When green, before the hull turns hard and brown, these can be ground into a paste or added to soups and stews.  Basswood seeds, leaves, and flowers can all be added to soups and stews.

The inner bark of Basswood (the whitish layers between the rough outer bark and the solid wood) is edible as well and has a very refreshing texture and flavor.  It reminds me of cucumber.  It can be scraped away in handfuls and eaten raw or boiled to break it up and soften it for chewing and digesting.

Basswood leaves can get quite large and make perfect natural tin foil for baking meals in earthen pits or in the coals of a fire.  Wrap food in at least 5-6 layers of green leaves and tie with the peeled bark from young basswood suckers or branches.

An old-timer once told me that he heard of families in the Great Depression who added basswood sawdust to bread-mix as a filler to make rations last longer.  The wood is not poisonous, so it’s something to at least file away in your brain.

As mentioned previously, the hollow tubes from basswood suckers and young branches have many uses.  Some of these include:

Basswood is a very soft, nonpoisonous wood and makes an excellent medium for a variety of cooking utensils including spoons, ladles, forks, chopsticks, stirring sticks, and spatulas.  Most of these can be carved with just a knife in very little time and with little effort.  Using basswood for such tools also reduces wear and tear on your knife blade.  Due to their fast and straight growth, basswood sucker saplings also make excellent quick and dirty arrows for bow and arrow or atlatl.  They are lightweight, have few branches, and very easy to fire or heat straighten.

By far the most incredible resource the Basswood tree provides is cordage.  That name “BASS”wood is actually derived from the word BAST, which means plant fiber.  The inner bark of the Basswood tree is one of the most easily accessible fibers I’ve ever gathered from the wild.  It is best gathered when the sap is running heavy during the spring months.  With saplings that are 3” in diameter or smaller, the tree can be scored from left to right.  A knife can be used to pick at the score line and once a piece large enough to grab is available, entire strips that are many feet in length can be pulled from the sapling.  If care is taken, saplings can be cut down and the entire sheath of outer and inner bark can be removed in one piece by carefully peeling from the bottom.  Pounding the bark with a wooden mallet (metal will damage the inner bark fibers) will help it to loosen and will be necessary to process trees much larger than 3” in diameter.  I’ve seen sheets of bark pulled from basswood trees (with many hours of careful peeling and pounding) as large as 2 feet wide by 15 feet tall.

The inner bark fibers, just beneath the rough outer bark, can be processed into cordage that can be used to make nets, clothing, baskets, traps, or any other accoutrement necessary for survival.  On the younger saplings with a thin layer of outer bark, the freshly peeled strips of bark can be used right away as crude cordage for shelter building or rough bindings.  In my courses, I’ve seen two adult men pull on opposite sides of a 2” strip of basswood bark and not be able to break it. 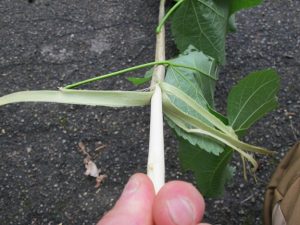 For a finer, more pliable cordage, the bark must be soaked (called retting) in water for at least a couple weeks.  The rotting process loosens the inner bark fibers from the outer bark.  It can then be easily pulled away in long ribbons that can be used as is or stripped down into thinner cordage.  The soaking can be done in a container or at the bank of a pond and river.  This process of retting works for many varieties of trees including, Walnut, Willow, Tulip Poplar and Cottonwood to name a few.

Because Basswood bark can be removed in large chunks from the tree (typically during spring months only), it is an excellent candidate for crafting bark containers.  Below is a basic pattern for making a seamless bark container.  The dashed lines represent fold lines. 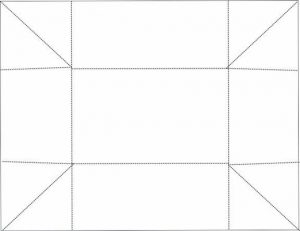 Survival Fishing Kit: Worth the Time or Useless Gear?

One thought on “BASSWOOD – Amazing survival resources from the Basswood Tree”