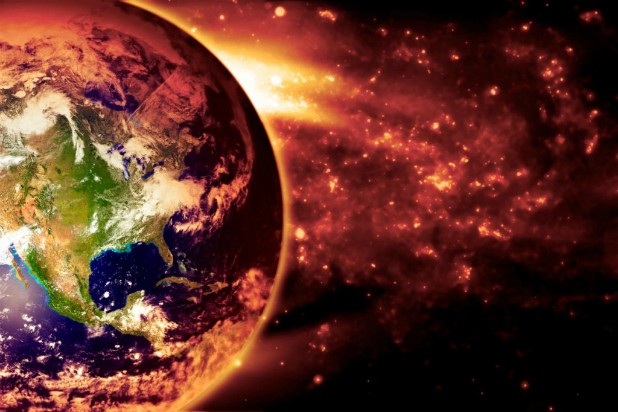 Both NASA and the University of Colorado say that the Earth is facing the real possibility that the North and South poles will flip. What does that mean?

In your mind, can you hear the music associated with the former hit movie Jaws? The music starts slowly and then quickly builds to a crescendo as the oncoming shark strikes its unsuspecting target.

The Earth’s magnetic field surrounds our planet like an invisible force field – protecting life from harmful solar radiation by deflecting charged particles away. … Indeed, our planet’s history includes at least several hundred global magnetic reversals, where north and south poles reverse and it can do with a vengeance and many scientists are stating that the planet is going through a pole shift as you read these words.

Even the Mainstream Media is Taking Note

The music from the movie Jaws is indeed playing and building to a crescendo, however, we are not talking about an impending shark attack. We are witnessing a potentially catastrophic pole shift that is already underway. Even the mainstream media is picking up on this phenomenon and reporting the event.

North American airports have been hard-hit in terms of the cost of keeping up with the ongoing pole reversal.

From the Witchita Eagle:

For the first time in its nearly 64-year history, Wichita Eisenhower National Airport’s runways will be renumbered.

That’s because of the slow but constant shift in the Earth’s magnetic poles, which has altered the compass headings pilots use to fly in and out of the state’s largest commercial airport.

Airport officials told members of the Wichita Airport Advisory Board this week that because of magnetic variation, the compass headings of Eisenhower’s three runways have shifted six degrees, prompting the airport to plan to re-number its two primary and one crosswind runways…

…Every five years the Federal Aviation Administration “conducts evaluations of magnetic variation and assigns the values that are to be used in designating runways,” according to a document on its website. A shift of magnetic variation greater than 3 degrees prompts the FAA to make changes to published airport approaches, and to advise airports to make the changes on their property.

Over the past few years, a number of airports across the country have had to renumber their runways, including in Oakland, Calif.; Las Vegas; and Tampa, Fla.

Eisenhower officials said the changes would likely cost the airport “hundreds of thousands of dollars.”…

It is interesting to note that the article cites airport officials who are concerned about the few hundred thousand dollars the project will cost and yet, nothing is said about the catastrophic loss of life that could befall a planet going through a pole shift.

Squeezing the Truth Out of the MSM

Because airports are being forced to adjust to an ongoing poleshift, the MSM has to deal with the issue. However, the cited sources are underplaying the threat as evidenced by the following account.

NASA’s MAVEN (Mars Atmosphere and Volatile Evolution) principal investigator Bruce Jakosky, with University of Colorado, Boulder, warned recently that there is evidence the Earth’s magnetic field is weakening and that we would soon see a complete reversal of magnetic poles.

Scientific researchers say there is evidence that the Earth’s magnetic field has weakened significantly in the past 160 years and that neutralization of the magnetic field and flipping of magnetic poles could occur in less than 1,000 years – or as early as the next 100 years.

…scientists have tried to allay fears caused by predictions by some doomsday theorists that a flip of the magnetic poles could shift the continents and trigger earthquakes, tsunamis and catastrophic changes in global climate…

Yet, there are scientists, highly respected scientists that willingly take on the role as “doomsday theorists” as they provide a much more serious interpretation about what could be unfolding.

The Germans Weigh In

According to Monika Korte with the Niemegk Geomagnetic Observatory at GFZ Potsdam, Germany, the threat could be catastrophic to humanity as she states the following:

It’s not a sudden flip, but a slow process, during which the field strength becomes weak, very probably the field becomes more complex and might show more than two poles for a while, and then builds up in strength and [aligns] in the opposite direction. When the polar shift happens, the Earth will have no magnetic field for about 200 years,,,

Weakening of the Earth’s magnetic field could have serious consequences for life on Earth because the magnetic field acts as a shield that prevents dangerous solar radiation from passing into the atmosphere.

When its magnetic field is neutralized, the Earth will lose its ability to shield its atmosphere from direct exposure to dangerous solar radiation for up to 200 years, leaving humanity and life on Earth exposed to harmful radiation from the sun, including solar flares and coronal mass ejections (CMEs).

This would lead to a surge in the incidence of skin cancers, and disruption of power and communication, according to scientists.

Could Mars’ Past Predict Earth’s Future?

It appears that the understating of the effects of a pole reversal is naive at best.

Jakosky delivered the warning that we could soon see a flip of magnetic poles while announcing results of MAVEN measurements which show that Mars once had a thick atmosphere but that 99 percent of the atmosphere that could have supported life was stripped away by solar flares.

Please note that as covered before on The Common Sense Show, a sudden grid down scenario is a near extinction level event. In fact, the Naval War College is on the record as stating that if the United States were hit with a generalized EMP attack (ie same effect resulting from a pole reversal) a 90% loss of life could be expected in the first year.

Scientists believe that Mars once had a magnetic field but became more vulnerable to the atmosphere stripping effect of solar radiation and flares after it lost it.

According to John Grunsfeld, administrator for NASA Science Mission Directorate in Washington, “Mars appears to have had a thick atmosphere warm enough to support liquid water which is a key ingredient and medium for life as we currently know it. Understanding what happened to the Mars atmosphere will inform our knowledge of the dynamics and evolution of any planetary atmosphere.”

A magnetic pole shift that neutralizes Earth’s magnetic field and leaves it exposed to solar radiation would initiate the process by which solar winds stripped Mars of its atmosphere. However, the stripping of Mars’ atmosphere by blasts of solar winds occurred over billions of years. Because the Earth is expected to experience a magnetic poles shift for only 200 years, scientists believe that the Earth will not lose enough of its atmosphere to cause extinction of life

It is interesting to note that with all the divergent scientific opinions regarding the consequences of a pole reversal, that the government is not overtly studying the issue. Instead, the leaders of this planet, at least publicly, are choosing the bury their head in the sand.

Is there anything that can be done? That remains to be seen, but one would think that the powers that be would be devoting significant resources into finding out.