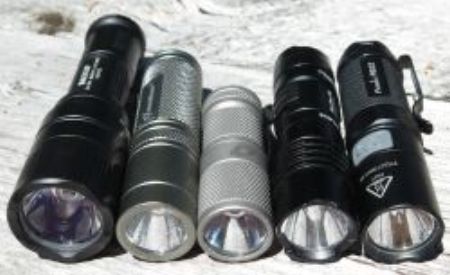 Most of us have that sinking feeling that the end will arrive somewhere between a bang and a whimper.  It likely won’t be a mushroom cloud on the horizon, nor will it be a slow steady predictable slide over the edge.  Regardless when or where it arrives, other than a knife, the flashlight just might be the second most important everyday carry (EDC) item to get you to the next step.  And since there is a better than 50% chance that darkness will be the dominant atmospheric condition when you need to move, a light is essential. Why better-than-half odds for dark? Easy.  First, there is a general 50/50 daylight chance, but given human propensity to make things worse at night, even a rogue SHTF event will grow inversely to the amount of available light. Further, being inside a structure going dark is almost a given.

My quest for a powerful, durable, and dependable EDC flashlight began decades ago.  Long before the 1984 release of the AA battery Mini Maglite made flashlight EDC carry a household practice, I was searching for solutions in the dive light world.  Tekna produced two AA flashlights that were as durable as they were bulky.  With heavy ABS plastic bodies and overbuilt screwdown bezels, the lights had potential, but were severely limited by their traditional incandescent bulbs.  I hot-rodded my 4-AA Tekna dive light with a halogen bulb and gold washers, and thought I was king of the night with my photon firepower.

The two-AA Mini Maglite revolution of the 1980s spurred a rush for high powered pocket-sized lights.  Many other companies dove in, but until LED technology became affordable, all small lights were crippled by short battery life, fragile glass bulbs, and the most obvious, a low lumen count.  Maglite raised the bar further with its Solitaire single AAA flashlight in 1988, except that bar didn’t stay high for long since the notoriously unreliable Solitaire was carried on keyrings far more than it was ever lit up.

When LED technology entered the mainstream marketplace, major flashlight manufactures seemed caught off guard. In true paradigm shifting fashion, some of the big guns in illumination were left in the dark as smaller more nimble companies flooded the market with higher lumen, long battery life flashlights for a similar cost to upper end traditional bulb lights.  Maglite released its first LED light in 2006, but quickly noticed that many folks who carried the classic D-cell lights were as interested in the flashlight-as-a-club as it for a flashlight.  It quickly became apparent that the power-sipping LEDs did not require a foot-long supply of batteries. But by then, the genie was out of the bottle and Maglite’s name was now synonymous with old-school.

A parallel revolution was also taking place in camera technology.  As film cameras and their early digital offspring developed ever more voracious appetites for electricity, both battery manufactures and the paying public developed a taste for powerful lithium-based batteries over their alkaline and carbon siblings.  Add in CNC machining, the drugstore availability of high-end batteries, advances in LED light color and intensity, and a few disgruntled workers leaving major flashlight companies to give it a go themselves, a literal explosion of flashlight tech appeared on store shelves, but mostly through online retailers.

And in true tech form, the microprocessor-controlled advanced lighting solutions came with complex multi-stage interfaces, regulation circuits, timed and sequenced lighting options such as strobe and SOS, and a Moore’s Law of its own doubling lumens at a predictable rate.

Where we were once satisfied with 20 lumens, we quickly wanted 100, then 200, then 500, then a thousand!   We could literally carry a car headlight worth of light in a pants pocket. But alas, it came at a cost both in terms of money and runtime.   This first Flashlight Wisdom installment will address the single-123 LED flashlight along with a healthy salting of flashlight wisdom.

The shockingly small but powerful 123 battery has given flashlight designers, among many other technologies, a modern tool with which to pump electrons into something whose primary mission in life is to produce light. While the 123 batteries seem more expensive, they are actually cheaper then their lithium AA counterparts. And the advantages of a lithium-based battery include a decade of shelf-life, and a far greater operational temperature range. Other than cost, the only other downside is the increased risk of explosion and fire, so much so that in 2013 the TSA and Postal Service implemented restrictions on the carry and shipping of lithium batteries.

But TSA and USPS aside, the true goodness of the 123 battery really shines in the single-cell EDC flashlight. Some companies are producing flashlight that are not much larger than the battery itself, while others are able to stuff a mind boggling number of lighting choices into a light the size of your thumb. Of course that latter option comes with a programming interface that will require some homework to operate.

A handful of single-cell 123 LED lights were chosen for this article.  Represented are models from Surefire, Streamlight, 4Sevens, ExtreameBeam, and Fenix. This is not a specific review of each light but rather more of a comparison of options and designs that should help you decide on what flashlight in this EDC lighting space will best serve your lighting needs. Since the flashlights are all of quality, have high (enough) lumen counts, run on the same single battery, and are backed by customer service and a warranty (mileage may vary), we will focus on the operation, features, and differences of the lights with a general sprinkling of opinions based on real-world carry.

Let’s get this out of the way first. The lumen number is an indication of how bright the flashlight is, but not how far the beam will go or how much spill to the sides. Nor does it indicate the purity of the light such as the color or if artifacts like rings, hotspots, or LED squares are visible. But high lumen numbers sure do sell flashlights.  Real world lumen numbers are important, but the knife cuts both ways. While large sells, low lumens extend battery life. I have a triple-123 Surefire Fury that has a 20 lumen first stage and a 1000 lumen second. If I need to blind someone at a thirty yards, I can do it. But 99% of the time, 20 lumens is plenty. Even five lumens will get you through most tasks if it’s dark enough to really need a light.

For output adjustability, my preference is the Fenix. It uses a small rubber mode switch on the bezel, and a tailcap on/off switch. So the Fenix is easy to cycle through the brightness options during a natural hold.  And it remembers your last choice so if you put the light to bed on high, it will wake on high.  Or my preference, low on low.

Of these five lights, the Surefire is by far the largest, and the 4Sevens is by far the shortest. The 123 battery is about an inch-and-

a-quarter long. The 4Sevens is twice that length at 2.5 inches, and the Surefire almost doubles that stretching out to near four-and-a-half inches or three-and-a-half times the length of the battery.  While the Surefire is arguably the world’s largest single-cell 123 flashlight, the 4Sevens is not the smallest, but it does seem like it. The other lights in this comparison all hover around 3.5 inches.

For carry, small is good.  However, the use of a flashlight involves actual activity beyond just transporting. As a light gets smaller, it loses more than size, it also loses mechanical switches, lanyard attachments, and bezel options. In the case of the 4Sevens, its switch is a twist of the bezel.  While possible one-handed, the programming interface of the 4Sevens is definitely a two-handed job. Further, while the light can be off, a slight pressure compressing the head to body will fire up the flashlight whether in pocket or pack unless unscrewed far enough.

Compared to a tail switch, the twist-to-light is less convenient. On a good note, however, the light can be pulsed by pushing on the bezel, but without a further twist, the light will go off the moment pressure is released.

Some tail switches like that on the ExtremeBeam glow in the dark. It makes for easy identification but only if the little green switch cover has eaten enough daylight to illuminate until needed. Also, the ExtremeBeam is an all-or-nothing interface. One speed; full blast. Great for blinding bad guys point blank, but not good for sipping volts to ride out the storm.

Something to keep in mind here is that waterproof flashlights are air-tight in both directions. That means that if your batteries

off-gas, they will pressurize the inside of your flashlight. Usually this is not much of an issue except when the rubber cover over the tailcap switch swells like a balloon. Then it can be difficult to depress the switch. The quick fix is to unscrew the light releasing the pressure. Then note the type of batteries since some are more prone to off-gassing than others.

Runtime varies across lights, but you should hope for an hour at full speed, and many hours, even 10+ when running in low gear. Between five and 20 lumens is enough to navigate at night, but you will need the higher side of that low range when lighting for a group of folks.

Most newer LED lights step down their output to match the available battery power.  That means that while the maximum output might 500 or 1000 lumens, it won’t last long.  Then output will drop off along a shallow slope until zero. So after a few tens of minutes of running on fresh batteries, the difference between high and low will not be as dramatic.  A few tens of minutes more any you might not be able to tell the difference between high and low.  I’m told it’s a feature, not a bug.

And finally, regarding battery life, I have learned to avoid those lights that feel a need show their lower voltage by blinking every so often.  For me, that almost makes the light useless at that point except for walking in the dark.  So what the manufacturer thought was a good idea actually lessened the battery’s service life due to the programmed-in strobe distraction.  You will need new batteries when the light dims significantly or goes out.  I thought everyone knew that.   Got a single cell like you love? Tell us about it in the comments below. – Stay tuned for Part 2.

How Much Money Do You Have in Your Bug out Bag?

10 Staples That Should Always Be In Your Bug Out Bag

One thought on “Bug Out Flashlight Wisdom: Part 1”