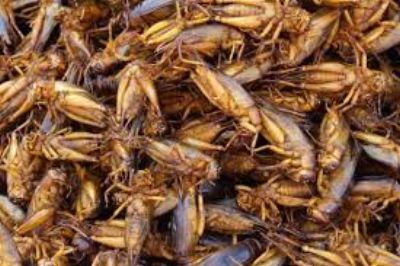 There are a lot of bugs you can eat in a food crisis or when SHTF. For example, in 1933 when the famine hit Ukraine it is estimated that almost 25% of the people fed at least one time on insects. For many, this was their life ticket. Would you be able to do so if you had no other choices?

Insects may sound disgusting now. But as the starvation sets in, your perspective might rapidly change. Things you don’t consider as food now might start looking edible.

According to the United Nations Food and Agriculture Organisation (FAO) nearly 2,000 insect species are already part of the diet of at least two billion people. The most commonly eaten insects are caterpillars, ants, bees, wasps, grasshoppers, locusts and crickets. All stages of insects are consumed, for instance ant eggs and pupa, beetle grubs and moth caterpillars.

About The Bugs You Can Eat

Did you know that some tiny bugs you can eat are delicious and scrumptious? In fact there are some cultures that consider these tiny creatures, insects, and worms a delicacy. You can try visiting an upscale restaurant to nibble on some of these insect delights only for the gastronomy purposes.

Those who have eaten insects for survival say that some bugs you can eat taste okay and others are really disgusting. Even really disgusting insects, though, can help you sustain life while you wait to be rescued. It’s really a mental challenge more than anything.

It is cheaper and quicker to raise a particular breed of insect to meal size rather than a cow. More so, insects have more protein per size than bigger animals, and various minerals which humans need but do not produce naturally. Here are the nutrients of most of the bugs you can eat.

But still, many of the bugs you come across shouldn’t be eaten even in a survival situation. Bugs that are generally associated with carrying diseases should not be eaten (flies, mosquitoes, ticks). Also,  avoid bugs that use poison for capturing prey and for defense (some centipedes, scorpions, and spiders). If you have captured bugs from standing water you should boil them before eating. Also, avoid brightly colored or smelly insects.

You can actually sustain yourself quite well with bugs so give them serious consideration when you’re otherwise without food.

10 Bugs You Can Eat in a Food Crisis

Here are 10 bugs you can eat in a food crisis – well-known in some countries as snacks or proper meals:

These larvae are white colored and have a soft tender flesh. You can roast the larvae with peanuts in some oil and eat them with rice or alone. The larvae taste sweet since they feed on honey bee wax. The larvae are very tiny in length and they give a unique flavor when roasted. Some chefs add pretzels while others prefer to serve their customers with other combinations. You may be surprised to know that the wax moth larvae are very popular among the upscale customers for their taste and sweet flavor.

These creatures can be found up to almost two inches long. You can dry roast them or you can pull the wings and legs off. A chef was extremely fond of changing half of his Chocolate Chip pieces for these insects and cooking them. Others put them on a tooth pick and dunk them in chocolate. “They taste like you would expect a cricket to taste”, is the usual reaction. They also have been compared to a doughnut: crisp on the outside and soft on the inside. The legs and wings are usually not eaten.

You would think a centipede would be one of the varieties one would not eat. Not so. In China, you can find them as a common street food.   They are usually threaded on a skewer, kebab style and eaten that way. One way of cooking them is to dip them in boiling oil or dry-grilling them. They also have a unique taste, which can be rather acidic. Any daring visitor to China should try this unusual food, but be careful of the circumstances in which you buy them.

Ants are another hot popular dish at any upscale restaurant, including modern countries. Edible ants have many varieties and they have interesting names such as Lemon ants, Carpenter ants, and honey pot and leaf cutter ants. The edible ants are cooked like any other vegetable or meat dish. Some of the cultures in the world prefer eating raw ants over cooked delicacies. Honeypot ants can be eaten raw while the leaf cutter ants are toasted before serving the clients. In some countries edible ants are sold at cinemas.

It is strange to think of eating these beautiful creatures with their iridescent wings, but they are considered a delicacy in some countries and are nutritious too.  Indonesia and China people catch these insects by waving a stalk coated in palm sap so they will land on it. They are cooked without wings.  The main way to cook them is to boil or fry them. Cooked dragonflies are often served with rice or vegetables. Although, foreigners are usually advised to only order what they can eat. Most of the times they end up eating something entirely different!

Do you like to eat soft, juicy and flavor meat? You should try mealworms. These worms usually feed on grain and they are small in size. The total length of a mealworm is less than an inch. They are known to absorb the flavors of ingredients in which they are fried. You can cook them in oil or use butter to get a sweet buttery taste. In case, you do not like the taste in which the mealworms were raised, just let them starve for twenty hours and then cook them with whatever ingredient you like most.

Caterpillars is the only bug I’ve tried. I ate it raw and it’s not good at all. The hairs make it even more unbearable. Don’t try this! Be smart and cook them before you eat them. Cook caterpillars with great. Experienced Chinese chefs separate the hairy part from the body.

Dried mopane worms (a species of caterpillars) are considered a delicacy in Botswana. Mopane worms can be soaked to rehydrate, before being fried until they are crunchy, or cooked with onion, tomatoes and spices. The flesh is yellow, and the gut may still contain fragments of dried leaf, which is not harmful to humans. The taste of dried leaves not removed is somewhat reminiscent of tea leaves. Dried mopane worms are frequently canned in tomato or chili sauce to enhance the flavor.

Little children put a lot of things straight into their mouths! But they may know what adults have forgotten. Earthworms are full of protein and iron. Croatia actually has a restaurant for the tasting of cooked earthworms. Worms digest dirt extracting nutrients in the process. If you don’t want to eat a little dirt then laterally bisect the worms and clean the dirt from them before cooking. The earthworms are specially farmed on site, so they are not feral worms. Earthworms are supposed to be full of protein and are low in fat, so some researchers have said they are a healthy choice.

You can eat them raw if you like their taste but many people prefer them cooked nicely and gently with rice or alone. Cockroaches are raised specially for the purpose of gastronomy and these tiny creatures are fed on fresh vegetables and raw fruits to keep them healthy and scrumptious. You can eat cockroaches toasted or boiled. To some people the roasted cockroaches taste just like fried chicken and very delicious when sauteed.

Bee larvae are prized in many cultures as tasty morsels. All they eat is royal jelly, pollen, and honey. The larvae, when sauteed in butter, taste much like mushroomy bacon. Adult bees may also be eaten, often roasted. In China, ground bees are used as a remedy for a sore throat.

Humans can survive for almost a month without food. As I mentioned, food crisis can last for years. After you finished your food reserves, you have to really think about how to procure your food. Bugs you can eat are a good option! But that doesn’t mean this is all you have to eat. Survivors are opportunists and should never turn down an easy snack, even if it’s a cricket. Gathering food in a survival scenario or food crisis is oftentimes a collection of many different sources, including bugs you can eat.

One thought on “Bugs You Can Eat in a Food Crisis”