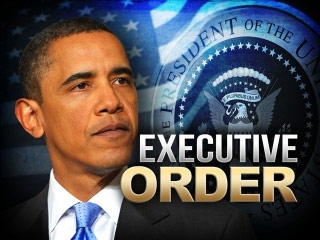 The “pen and phone” president, who has consistently relied upon a complicit media and arbitrary power to achieve his agenda, will not be content with using executive actions and executive orders alone.

He has already been willing to go beyond the bounds of the Constitution. Now, he will do even more…

Controversially, President Obama announced in a speech that he was using the powers of the Executive Branch to shield millions of illegal immigrants from deportation, to ban ammunition for AR-15s, ban the importation and sale of AK-47s and even to seize a broad range of assets including farms, industry, infrastructure and food during a declared emergency. He also used the power of his pen to delay implementation of his own pet project, Obamacare.

Just last week, Obama issued an executive action requiring government agencies to reduce their carbon emissions by a whopping 40% – with no input from Congress and involvement with the public.

Last year, as SHTF reported, some Democrats even created a caucus to draft executive orders… err, umm actions… for Obama to sign, in attempt to mandate “full employment” via the stroke of a pen!

“Without a doubt, the most urgent challenge that we face right now is getting our economy to grow faster and to create more jobs… We can’t wait for an increasingly dysfunctional Congress to do its job. Where they won’t act, I will.”

The White House page, apparently abandoned in 2012, boasts about countless “actions” that Obama has taken during his six-plus years in office to “support middle class Americans” – the very sector most rapidly eroding from the American landscape and being hardest hit by Washington and Wall Street’s economic actions.

Not hard to see the net effect of that kind of “help.” With friends like these, who needs enemies?

Now, President Obama has renewed his promise to do more… and complete his agenda in spite of Constitutional “obstacles” in Congress and a very critical public opinion that has fatigue from the era of “hope and change.”

In an interview with Huffington Post, Obama vowed to use “administrative” powers or the apparent power to “convene the private sector” to get his business done “by hook or by crook” (sounds like picking winners and losers a la Solyndra all over again):

“What we have done though is consistently looked for additional opportunities to get stuff done. Wherever we see a possibility of increasing wages, creating more jobs, making sure that more people are able to access opportunity, we’re gonna seize it. And we’re going to, wherever possible, try to reach out to Republicans and see if they can work with us. And where they’re not willing to work with us, we will do it administratively or we will convene the private sector.

“By hook or by crook, we’re going to make sure that when I leave this office, that the country is more prosperous, more people have opportunity, kids have a better education, we’re more competitive, climate change is being taken more seriously than it was, and we are actually trying to do something about it.”

“Those are going to be the measures by which I look back and say whether I’ve been successful as president.”

For the record, ruling by whatever means necessary means being a dictator. Pure and simple.

These are the progressive promises that Obama has vowed to accomplish – even in his waning days of office – by any means necessary.

As with most government actions, those means are more likely to come by way of “crook” than by “hook“:

@weeklystandard I guess we know its by crook.

@weeklystandard most likely by crook. He is not successful and won’t be when he ignores the people.

Though, there are certainly many ways that government can hook you as well, with plenty of strings attached. That is definitely something that bureaucracy is very good at.

Here’s video of the full interview, if anyone can stomach it: