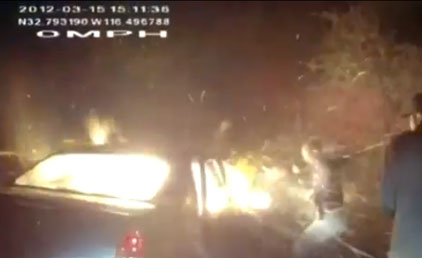 How widespread are the problems with excessive force by law enforcement in this country?

This shocking video once again raises questions about how much “less lethal” weapons like tasers really are during high stakes law enforcement encounters.

Dashcam video shows several Border Patrol agents descending on a vehicle at night, with one agent breaking through the passenger window and firing a taser at the driver, causing the vehicle to burst into flames.

The driver, Alex Martin, was killed in the ensuing explosion from the March 2012 incident, prompting a lawsuit filed by the victim’s family against the federal government blaming the weapon once considered “non-lethal” for igniting the fatal fire.

According to the lawsuit, the border agents refused to help save the driver, who was burned, despite having fire extinguishers in their vehicles.

The driver had reportedly led unmarked Border Patrol vehicles on a high speed chase for several minutes after they attempted to pull him over for driving the wrong way on Interstate 8 near Pine Valley, CA en route to San Diego before agents punctured his tires with a spike stripe and the vehicle was stopped.

The family’s attorney Gene Iredale accused the agents of breaking protocol and potentially endangering the situation by failing to identify and by display no markings of their affiliation:

The attorney said Martin had no idea the men were law enforcement and never identified themselves by the display of badges or by naming their organization.

As for the fire that happened immediately after the taser was fired:

Iredale said a container of gasoline may have spilled inside the vehicle, and the Taser’s electrical output ignited the fumes. He said the agent should have been able to smell the fumes before firing his weapon. He greatly criticized the agents for appearing to make no effort to help save Martin’s life.

“All three of those cars had large fire extinguishers in them and standard equipment,” he told the San Diego TV station. “Not one of these agents ever even tried to spray any of the fire extinguisher solution on that car.”

“This was a senseless act in a senseless way for somebody who had violated no law and who lost their life needlessly,” said Iredale. (source)

Was all this necessary?

The scene looks more like something out of a mob movie than a law enforcement investigation. Did these agents act appropriately?

In the wake of numerous high profile deaths at the hands of police, this incident appears to be one more case of unnecessary escalation and excessive force, as the vehicle was stopped and already surrounded by agents.

One commenter on Blacklisted News, where this video was posted, stated plainly, “Jesus, just how much is the public going to take?”

The growing perception, after seeing incidents both justified and unjustified, is that a trigger happy environment is causing too many deaths, and unnecessarily dividing the community against those who are supposed to protect it.

How far will things go before they’ve gone too far?