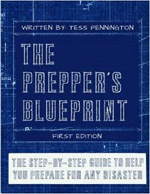 This information has been contributed by Tess Pennington, author of The Prepper’s Blueprint and The Prepper’s Cookbook. After joining the Dallas chapter of the American Red Cross in 1999 Tess worked as an Armed Forces Emergency Services Center specialist and is well versed in emergency and disaster management & response. You can visit her web site at www.ReadyNutrition.com.

Germs are spread quickly in population dense areas. Schools and daycares, workplaces, community events are germ-ridden cesspools for attracting unwanted illness and diseases. Studies are finding that sneezes and coughs cause illnesses to travel much farther than originally estimated. With the concern of flu season, as well as the heightened awareness of Ebola, it is crucial to have an understanding of germs and how quickly they can travel in a community setting.

How Far Reaching Are Germs?

Many are concerned that Ebola could go airborne. Technically, this virus can only be spread through bodily fluids. The virus spreads when saliva, mucous, blood, vomit, feces, or other bodily fluids of an infected person come into contact with someone else’s mucus membranes. The emphasis on this is it has to be a symptomatic infected person.

One virologist, Alan Schmaljohn at the University of Maryland School of Medicinewas asked if Ebola was airborne and states, “With Ebola, large droplets — which neither travel very far nor hang in the air for long — are the real risk factors. That means an Ebola-infected person would likely have to cough or sneeze up blood or other bodily fluids directly in your face for you to catch the virus, Schmaljohn says. If that drop of blood doesn’t land on your face, it will just fall to the ground. It won’t be swimming in the air, waiting to be breathed in by an unsuspecting passerby.” Source

However, there are differing opinions. Recently, the CDC warned of infectious diseases of this sort spreading through the air. As well, in a novel study by Massachusetts Institute of Technology (MIT), researchers show that coughs and sneezes have associated gas clouds that keep their potentially infectious droplets aloft over much greater distances. The fluid droplets expelled in coughs and sneezes are a combination of sizes—ranging from 1 micrometer to 800-900 micrometers. “The idea was that we mostly transmit diseases through the larger droplets that fall on other people and surfaces,” says study coauthor Lydia Bourouiba, Ph.D., assistant professor at MIT. Researchers previously thought that those larger droplets were going to travel farther than the smaller ones—reaching about 1 meter while the smaller droplets stayed around 30-50 centimeters in front of you.

The study made a startling realization: there’s a crucial respiratory cloud that you expel every time you sneeze or cough, which is made up of hot/moist air and some water. This cloud actually enhanced the range and travel length of the smaller droplets, helping them travel way farther than they previously thought.

Because the droplets are in a cloud, they stay suspended and travel further — particularly smaller ones, which travel up to 200 times farther than previously estimated. Therefore, they can penetrate the room and ventilation systems more insidiously.

“When you cough or sneeze, you see the droplets, or feel them if someone sneezes on you,” says Bush. “But you don’t see the cloud, the invisible gas phase.

The influence of this gas cloud is to extend the range of the individual droplets, particularly the small ones.” “You can have ventilation contamination in a much more direct way than we would have expected originally,” says Bourouiba.

The researchers suggest that architects and engineers may want to reexamine the design of workplaces and hospitals — and air circulation on airplanes — to reduce the chance that airborne pathogens will transmitted among people. Source

Once a hand has been contaminated, inadvertent transfer of the virus to the mouth, nose, or eyes can result in infection. It’s still helpful to sneeze into your hands or elbow to capture the larger droplets, but those smaller droplets may linger in the air long after you cough, says Bourouiba.

Ebola Can Survive Outside the Host

Based on experimental findings, Ebola has the capacity to live outside its host. The virus can survive in liquid or dried blood even in low temperatures. Source Given that most germs travel by moisture droplets in the air and on our hands, think about how many communal objects we touch every day: door knobs, remote controls, cell phones, pens, handshakes, food and pets (germs can be transferred from petting animals). Perhaps it is purely speculation, but could we apply the MIT research to the fear of Ebola spreading throughout cities and communities? Much of our population is in close proximity to one another. We take subways, trains and buses to get to work, sit in classrooms and work in close relation to others. Not to mention our advanced transportations have the capacity to take us anywhere in the world. It is not too far of a stretch to assume that within these population dense areas others could quickly be infected with the Ebola virus.

Keep in mind, there is no cure for Ebola. If more patients are found to have Ebola, the community as a whole needs to begin taking immediate protective measures. The only way to prevent this horrible disease is to avoid it altogether.

There are very specific steps you can take to reduce your risk of acquiring Ebola, and cleaning and washing your hands will only get you so far. The best way to avoid infection is through social avoidance. If you have to go to work or school, preventing the spreading germs from surfaces you touch to your mouth, nose or other people is advantageous. Most importantly, if you believe you are ill or a family is sick it is imperative that they stay home and isolated. Limiting contact by isolating the ill in a sick room will further reduce the spread of this contagion. If you are ill, do not go out in public. Even if you need to run a quick errand, keep in mind that the germs in the cough or sneeze that escaped into an empty aisle can linger in an invisible cloud that others will certainly pass through.

If you are in an area where others have Ebola:

According to the CDC:

If you travel to or are in an area affected by an Ebola outbreak, make sure to do the following:

Healthcare workers who may be exposed to people with Ebola should follow these steps:

We live in complex, densely populated areas. If the CDC overlooks one person, then Ebola continues to spread throughout the community. A pandemic can affect every type of our livelihood. Get informed, get prepared and hope for the best.

Tess Pennington is the author of The Prepper’s Blueprint, a comprehensive guide that uses real-life scenarios to help you prepare for any disaster. Because a crisis rarely stops with a triggering event the aftermath can spiral, having the capacity to cripple our normal ways of life. The well-rounded, multi-layered approach outlined in the Blueprint helps you make sense of a wide array of preparedness concepts through easily digestible action items and supply lists.

Tess is also the author of the highly rated Prepper’s Cookbook, which helps you to create a plan for stocking, organizing and maintaining a proper emergency food supply and includes over 300 recipes for nutritious, delicious, life-saving meals.

Visit her web site at ReadyNutrition.com for an extensive compilation of free information on preparedness, homesteading, and healthy living.

The CDC Director Just Confirmed They Have No Clue: “We Have To Rethink The Way We Address Ebola Control”