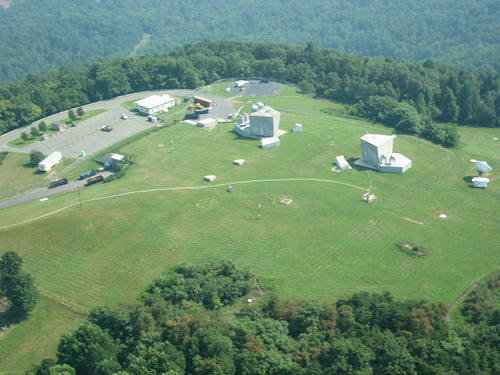 While a growing community of individuals is set out to prepare for a collapse of society, and become known sometimes dismissively as “preppers,” the real preppers are in the highest levels of government, and they are ready to evacuate and continue the government even in the event of an all-out breakdown of society.

Not only is this secret continuity of government activity happening but it is accelerating rapidly. “They” are absolutely getting ready for something on a grand scale, and have invested billions of dollars allotted in secret to agencies for national security to create a hidden infrastructure for survival and subtlety.

The elite are increasingly investing in prepping contingencies – at both a personal and institutional level.

Panicked members of the elite are buying luxury bomb-proof underground survival bunkers because they fear mass civil unrest might be on the horizon.

The company behind the construction of the sprawling complexes, Vivos, says the facilities are for the “protection of high net worth individuals” in the event of apocalyptic-style scenarios during which “millions will perish or worse yet, struggle to survive as victims”.

A William M. Arkin  story  from last year unveiled some fascinating photos of what the site is convinced is a secret underground bunker facility for ranking members of the Continuity of Government structure:

Phase Zero (Gawker) makes a compelling case for what is lurking below the surface:

America’s Preparathon, yesterday’s national pep rally—brought to you by the Department of Homeland Security—tipped me off to this real underground bunker north of Charlottesville, Virginia. The bunker’s purpose is completely secret…

Yesterday’s Preparathon was described by its sponsor FEMA as “a grassroots campaign for action.” Washington’s definition of action is lining up and marching, saluting, and following orders. But there’s a secret definition, written between the lines of the Constitution and public laws: Officialdom evacuating from disorderly and disobedient America before the citizenry catches up or catches on.

Its called continuity of government, and it’s been refined over the years to anticipate foreign invasion, nuclear war, catastrophic accident, rioting and citizen unrest, an electromagnetic pulse above the capital, a catastrophic failure of critical infrastructure, a malicious hacking of the electrical grid, terrorist attack, hurricanes and earthquakes, an asteroid from space—you name it. … the White House and the Generals and the Departments large and small all have plans to depart the capital city and recover.

Which brings us to Peters Mountain. […] their classified alternate facility, which sources say is in Albemarle County in central Virginia. 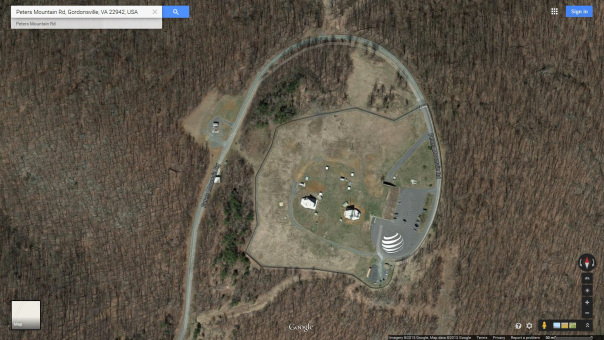 […] roughly 16 miles east of Charlottesville—and it’s undergone a $61 million plus renovation since 2007.

For decades, there’s been speculation about just what Peters Mountain is, this Cold War artifact on the outskirts of Washington, part of a string of “hardened” communications nodes built to survive nuclear war in the 1950s. It’s a favorite of internet conspiracy types, but no one seems to know what it is, other than the fact that the land it’s on is officially owned by AT&T. And if that’s not clear, there’s an AT&T logo newly installed on the top of the mountain itself, a helicopter pad built for this don’t-pay-attention-to-us blank spot on the map.

The underground entrances can be seen on Google satellite imagery – note the paved road entering into shadow in the photo below. The entrance is clearly that of an underground facility. 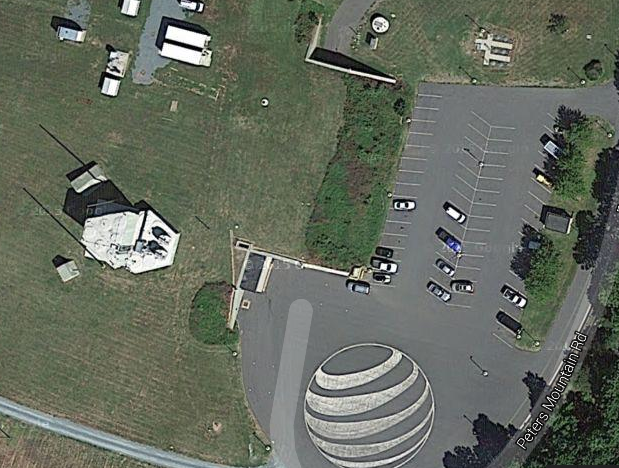 That this is indeed an underground entrance is made abundantly clear by the following photo at the site: 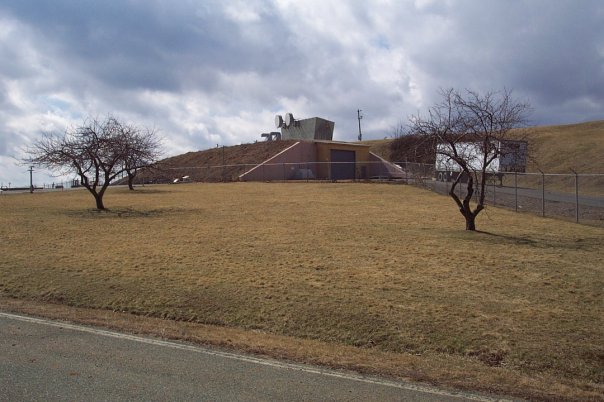 Rumors have been circulating about the extent of its activities, and who is really part of operations there:

“I always heard stories about how it was a Nuclear Missile base, or a super communications hub. But the coolest one was the rumor that on 9/12/2001 Anti-Aircraft Artillery went up the mountain and has not come down. There is a big paved road that goes to the top off of Turkey Sag Rd. [sic] which is a gravel road and tractor trailers are always going up the mountain with covered loads. There are all sorts of Gov’t signs about private property and no trespassing. From Gordonsville at night the top of the mountain is lit up like a Christmas Tree with a lot of blue lights which I thought was weird. and you can see vehicles driving around.”

Nothing in the federal budget or in the county records suggests any government occupation, and nothing refers to NIEMA or the intelligence community. That again comes from sources who have worked for the DNI and its continuity activity. They describe the national Warning, Alert, and Mobilization System (WAMS) which would alert a select group of civilian executives from across the intelligence community to deploy to the bunker. The alert would come from “The Communicator” Automated Notification System and would take two forms: alerts for everyone and alerts for the “core” participants. Because Washington is notorious for traffic congestion, those so-called core participants, those who have to move away from Washington within minutes of notification, would congregate and board helicopters which would take them away.

It seems clear enough that the blatant AT&T logo indicates the front-like nature of this inexplicable site. As a corporate backbone to the communications of the country since the dawn of the electric era, AT&T is deeply in bed with the NSA and many of its partners.

As the New York Times states up front:

The National Security Agency’s ability to spy on vast quantities of Internet traffic passing through the United States has relied on its extraordinary, decades-long partnership with a single company: the telecom giant AT&T.

[…]AT&T’s cooperation has involved a broad range of classified activities, according to the documents, which date from 2003 to 2013. AT&T has given the N.S.A. access, through several methods covered under different legal rules, to billions of emails as they have flowed across its domestic networks. It provided technical assistance in carrying out a secret court order permitting the wiretapping of all Internet communications at the United Nations headquarters, a customer of AT&T.

The N.S.A.’s top-secret budget in 2013 for the AT&T partnership was more than twice that of the next-largest such program, according to the documents.

If it wasn’t for spy work, AT&T wouldn’t get no work at all.

Can we be surprised, then, by the significant upgrades noted by Arkin since the wake of the 2001 terror attacks when money for continuity of government and counter-terrorism flowed rapidly. 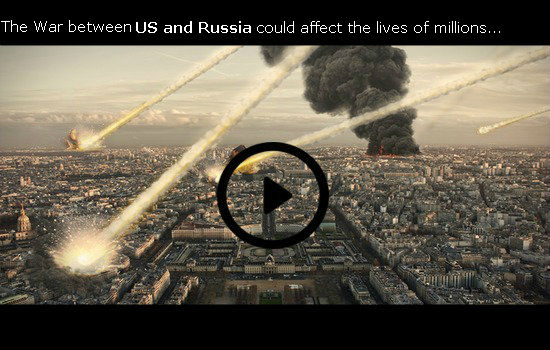 It is no stretch of the imagination to suggest that this site, leased to AT&T and underutilized, is a black site operating on behalf of a network of various secret agencies of the government, including those involved in spying on every communication that crosses American wires.

The above ground installations, about which little is known, look a lot like other military radar towers, such as PAVE PAWS (see photo below):

Are they giant-scale radome coverings for the advanced systems installed there and sweeping communications across entire areas? 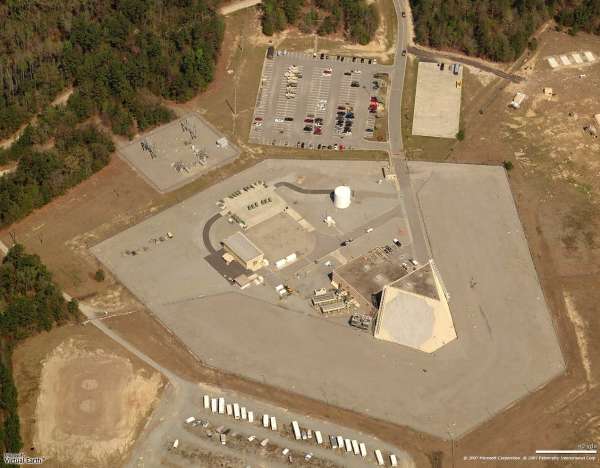 PAVE PAWS – an Army radar installation that looks strikingly similar to the two large buildings on top of the ’empty’ ATT underground bunker site situated on top of Peterson Mountain. Are they radar systems?

PAVE PAWS is a Phased Array Warning System dating back to the Cold War era designed to detect a missile launched from sea from the entire continental perimeter of the United States. It’s an “Air Force Space Command radar system operated by three 21st Space Wing squadrons for missile warning and space surveillance.”

Exposure in the population to PAVE PAWS is believed to be linked to several cancer clusters near the military sites where they are located, though the Army has played down concerns and a study has been produced to find that radar exposure was not a cause, and that exposure limits were safe.

Regardless, there are some very advanced corporate operations going on there, and it will be a top location for government officials and other connected individuals to flock to for shelter should there be a national crisis.

It is obvious that the facility is used for much more than just surviving an attack or mega-disaster. There are continental-wide communications systems operating in secret on a massive scale, and there is no limit to the amount of data monitoring and data transmission that they are or could be involved in. It isn’t a routine site at all.

Across the entire territory of the United States, there are doubtless dozens if not hundreds of massive underground facilities for the sole purpose of preserving the power of the federal government and the corporations it is conspiring with. They have plans to continue, no matter what events may transpire.

Civil unrest could very well be in the near future, and these top minions of the system have plans to stay well away from all the chaos that could ensue.