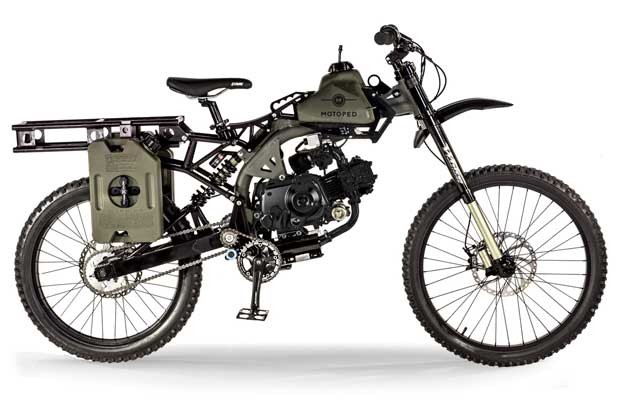 I was casually strolling around the internet today as most of us do at some point in time, looking for article ideas for the Prepper Journal. I do this whenever I don’t have something pushing into my thoughts as readily as I hope and it happens occasionally when writer’s block hits me. I was lucky enough to stumble on something that many of you, myself included might not have seen yet, but that could be an excellent bug out vehicle option in the right circumstances. 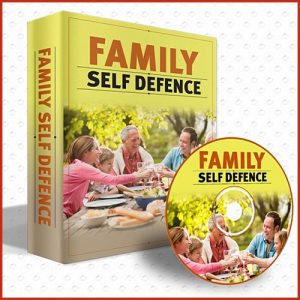 What is the Survival Bike? Is it just a souped up Mountain Bike that has been painted OD green? No, the Survival Bike from MotoPed is actually a Moped. Remember when mopeds were all the rage for people who had too much money for a bike and didn’t really want to pedal? I thought they were a thing of the past replaced by the obnoxious scooters that I see more and more everywhere. The scooters are not obnoxious because I am against saving gas or anything like that; I would just like them to keep up with the flow of traffic. There are few things less annoying that getting behind some 300 pound guy on the back of a dinky scooter going up a hill with his Hitler helmet on. But I digress…

The Survival bike has a motor attached to a really beefy bicycle. You can pedal just like a regular bike, or you can use one of two options of engine to power you along at a top speed of 24 MPH. That sure beats the heck out of walking if you are forced to bug out and with the two included RotopaX 1 Gallon fuel tanks, your range is potentially 400 to 500 miles according to the MotoPed site.

The rear deck has a mounting rack that will hold up to 50 lbs and while that isn’t going to be enough to pack your entire house of survival supplies, it could take a nicely equipped bug out bag or a small child.

Is a Survival Bike a good option for bugging out?

I recently wrote a post that received a lot of interest in the comments section called “10 reasons why you do not want to bug out” where I basically said that for most scenarios, most people would be better off staying at home as opposed to bugging out. I also said that the circumstances of your life, the disaster or threat you are facing and your personal situation would dictate whether anything like this was possible. If you found yourself unable to stay in your home shelter, bugging out may become necessary and having a means of transportation, while there are some drawbacks, does have it’s advantages.

For a bug out vehicle, any bicycle type of device would not be my first choice for the following reasons. 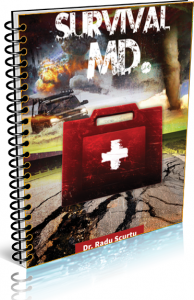 Now, there are some advantages to bikes and I can see conditions where a moped like this would be very useful.

I think the concept is brilliant and they even have an upcoming Black Ops model (pictured above) that adds a lot of the gear you are looking for to the package, including a crossbow, which is in keeping with the stealth theme. Is something like the Survival Bike right for you? With a price tag of $3,349 + $325 for shipping, it isn’t for me. What do you think?

If You Could Only Have One Survival Item …

How to Find the Right Bug Out Bag