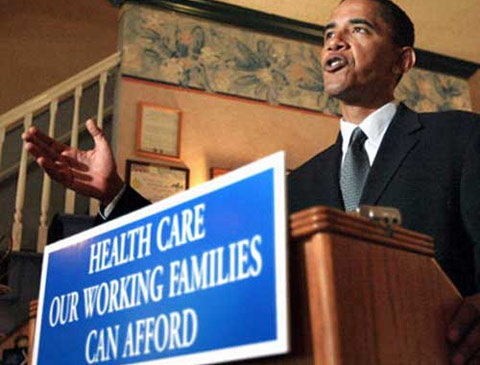 Though a 2012 Supreme Court ruling upheld Obamacare as a legal tax on the American people, the nation’s highest court is preparing to hear arguments on the Federalized health care legislation once again.

The latest case targeting the Affordable Care Act focuses on the subsidies that were supposed to be given to Americans who signed up for the plans, but because numerous states refused to set up their own exchanges the subsidies now fall on the federal government, something that was not authorized under the original legislation and is therefore, according to opponents of Obamacare, illegal.

At issue in this case is the legality of subsidies offered to help millions of low- and middle-income people buy health insurance. Opponents argue that most of the subsidies are illegal.

“The plain language of the law makes it clear that subsidies are only to be provided for the purchase of health coverage through exchanges setup by the states,” Rep. Tom Price, R-Ga., said in a statement. “Nevertheless, the Obama administration and others are asking the courts to disregard the letter of the law and instead rule based on bureaucratic rewrites and revisions.” (Fox News)

Though just a technicality, it’s a big one. There are tens of billions of dollars involved and with a Republican run Congress soon to take over any possible amendments to the law are unlikely.

This doesn’t bode well for the Affordable Care Act, because a ruling in favor of the plaintiffs will essentially deal a death blow to the entire law.

President Barack Obama’s administration maintains this argument is baseless and that Congress always intended these subsidies to be available nationwide.

A ruling in favor of the plaintiffs in this lawsuit, King v. Burwell, would utterly devastate Obamacare.

The chief aim of the law is to expand health insurance coverage and offer financial assistance to families that can’t afford it. Since most states declined to set up their own health insurance exchanges, the federal government was left to set them up instead. As a result, more than two-thirds of the people who had signed up for health insurance of April 30 purchased their insurance from a federal exchange. Among all enrollees, 85 percent received subsidies to help pay for it — that’s almost 5 million people. The average value of these tax credits was $264 a month, which represents a discount off the sticker price of more than three-quarters. (Huffington Post)

What’s at stake is that the five million Americans who depend on the subsidies in order to have health care stand to have their full rates re-instituted because their subsidies have been given to them without any legal basis.

And while the Obama administration claims that Congress always intended to make these subsidies available to everyone, Congress failed to detail this very important item within the law itself.

Should the Supreme Court rule against federal Obamacare subsidies the Affordable Care Act would fall apart almost instantly, as five million low-income Americans would see their health premiums jump nearly $3000 per year, making it too costly for just about everyone who depends on the subsidies.

Obamacare, it seems, is now under serious threat of being completely destroyed.

The argument from opponents of the legislation boils down to one single point: why should middle- and high-income earners be responsible for covering the health care costs of others? While low-income families have experienced significant cuts in their premiums, and in some cases even free health care, middle-class Americans have seen their rates triple or even quadruple.

The arguments for and against are summed up succinctly by two commentators at the Huffington Post: Obamacare was sold to the American public as an Act that would provide affordable insurance to all. In that regard it has been an abject failure. While many Americans have, in fact, seen their premiums cut to affordable levels, millions of others have been left without healthcare because the government says they make too much money. Moreover, millions of younger Americans have opted out of the healthcare option altogether and prefer to pay the associated tax penalties instead.

This has left a massive fiscal black hole, something the Obama administration didn’t see coming because they assumed everyone would want to pay twice as much as they did before for inferior health care. In fact, the problem is so serious that Obamacare will likely collapse in on itself with or without the Supreme Court’s ruling:

The whole idea is predicated on the notion that you can indefinitely take from Peter to pay Paul.

But eventually Peter is going to run out of money and not be able to foot the bill, or he’ll simply refuse to buy into the scheme altogether.

Like everything else government, the new health care initiative will be a complete and utter failure.

The basic principles of mathematics will prove this to be true in coming months and years.

As Denninger notes, America will be “strangled and expire economically as a direct consequence” of the marriage of the State and Health Care industry.

Obamacare, it seems, is doomed to failure one way or the other. With the threat of subsidies being taken away the legislation would likely collapse in the next few months and Americans may be spared the impoverishment that is sure to come with incredibly high health insurance premiums and taxes.

If the Supreme Court rules against the illegal federal subsidies, then the move could well deal a death blow to one of the most massive socialized actions in American history.

Your “Children Will Be Fined” If You Fail To Sign Up For Obamacare: People Are Going To Be In for A Shock