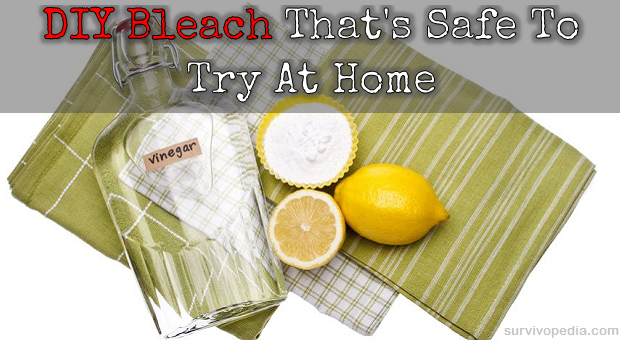 There are several reasons why you may want to make your own bleach at home instead of using store-bought stuff. First, gallons of bleach take up a ton of space when you’re trying to stockpile enough to get you through several months of disaster. Another reason is that standard bleach has a relatively short shelf life.

That’s right – most people don’t realize that those 20 bottles of bleach in the basement will start to lose potency after about 6 months. At the year mark, assuming you’ve kept it between 50 and 70 degrees F, it loses 20% potency, then about 20% per year after that. In other words, when you reach for it to disinfect water or living space, it may not be any good. It’s OK though – we have a couple better options for you that work just as well.

Pool shock has a few advantages over household bleach when it comes to survival uses. The top two are shelf life and storage space. Pool shock is sold in dry granular form and as long as it remains that way and is stored in a cool, dry place, it has a shelf life of 10+ years. When it comes to storage, one pound of pool shock will effectively treat up to 10,000 gallons of water. Significant advantages.

First, make sure that you buy pool shock that has around 70% calcium hypochlorite and doesn’t have any algaecides, clarifiers or other active ingredients.

To make a concentration that is equivalent to household bleach:

Mix together. Don’t be alarmed if it’s milky colored because that’s the inert ingredients. Let it sit for a few hours so that those ingredients settle and it will have the same slightly yellowish clear appearance that liquid household bleach does. If you’d like, you can drain the new bleach solution off the top after the other stuff settles.

How to Use: This mix is exactly the same concentration as household bleach. To sanitize your water, use the same 8 drops of bleach solution per gallon of water that you would use if it were sodium hypochlorite liquid bleach.

How to Store: Store in a cool place. Once you mix the liquid solution, it has the same shelf life as regular bleach so only mix what you’re going to use quickly.

If you want to check the concentration of your solution, use chlorine test strips. Household bleach is 6% bleach, which works out to be about 7500 parts per million on the test strip.

Warning: Calcium hypochlorite is just as caustic as sodium hypochlorite. It will still bleach your clothes and damage your skin at full potency. It’s also toxic in concentrated form just like household bleach is. Still, it’s no more dangerous than regular bleach and it’s an excellent way to sanitize surfaces and water while retaining shelf space.

According to the EPA (Environmental Protection Agency), paracetic acid effectively kills the big guns in the bug world: e. coli, salmonella, listeria, staphylococcus aureus, shigella, candida mycoderma and many viruses, including the flu. It’s made by combining hydrogen peroxide and acetic acid, aka vinegar and is actually used to disinfect wastewater. It’s so potent that it’s approved for use in many food facilities and can even be used to sanitize some medical and dental instruments.

The problem is that paracetic acid is extremely unstable and begins to weaken almost immediately after the two are combined. We have a solution though: don’t mix them until you’re using them. That’s right – keep the peroxide in one bottle and the vinegar in the other. Spray them both on the surface, where they will merge to create paracetic acid and kill all the nasties.

Paracetic acid is good for the planet and the health of the household, too. In water, it breaks back down to hydrogen peroxide and acetic acid, which then breaks down to water, oxygen and carbon dioxide. It’s often used to disinfect fruits and vegetables; just spray it on them as you would spray it on a surface.

How to Use: In order to kill the full range of bugs – bacteria, viruses, fungi, spores, yeasts and molds, it needs to be no more diluted than 3000ppm. Since standard household peroxide is 3% (3000ppm), and vinegar ranges from 5%-7% concentration (5000-7000ppm) this combination is more than sufficient to kill what needs to die.

Keep them in separate bottles and spray equal amounts of the peroxide and vinegar (apple or white) onto the surface. Let it sit for 5 minutes before wiping because it takes that long for it to completely sanitize it. Even better, let it air-dry. If you want to make it a bit more potent, add an extra spritz of peroxide last.

To disinfect water, we had a tough time finding a verifiable percentage from any type of authoritative personnel. We found one research paper from the CDC (Centers for Disease Control) that suggested adding peracetic acid at a dilution of .05-1% but it’s tough for us to figure how much of that it would take in homemade solutions because strengths vary from product to product.

How to Store: Hydrogen peroxide is light-sensitive and typically comes in a dark bottle. Both it and the vinegar should be stored in a cool, dark place. It works best at moderate temperatures – between 58 and 75 degrees.

Warning: Though paracetic acid is completely green once it breaks down, it can be a bit corrosive to your skin and the fumes may burn your throat and eyes. Use in a well-ventilated area and wear gloves to keep from getting scaly skin.

Shelf Life:Properly stored vinegar is self-preserving and has a shelf life of practically forever. Hydrogen peroxide, on the other hand, only has a shelf life of between 1 and 3 years unopened if kept in a cool place and is only good about 45 – 60 days once it’s opened. To tell if it’s gone bad, pour a bit in the sink; if it fizzes, it’s good. Peroxide that’s lost its fizz is ineffective but not harmful.

Both of these options are just as good as, or better than, standard liquid household bleach when it comes to survival purposes. Though the peracetic acid isn’t good for water, it’s certainly an effective method to keep your environment free of pathogens. Considering the shelf life and small storage requirements of calcium hypochlorite, you should definitely have some in your stockpile!

If you have any good, effective recipes for homemade bleach, we’d love to hear about them in the comments section below.

How To Convert Crock-Pot Cooking to Dutch Oven Perfection