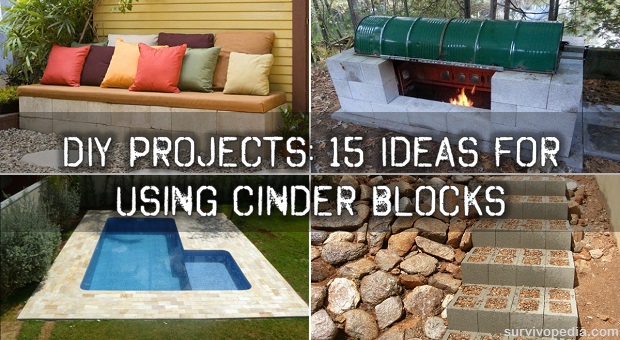 Cinder blocks are actually CMUs (an acronym for concrete masonry unit) i.e. large, rectangular bricks which are used in construction, but have a lot of other uses. We’ll explore 15 smart ideas for using cinder blocks for your homestead.

Why cinder blocks you may be wondering? Well, because they’re readily available at any hardware store or construction site, you can get them for basically nothing if you scrap or recycle them, they’re relatively lightweight, tough, and they require next to nothing in terms of maintenance.

As you can see, they’re perfect for building all sorts of things (affordable, utilitarian pieces mostly) at dirt cheap prices when compared with what you can buy from a hardware store.

First you should check out the laws and regulations in your county regarding building fire pits. Sometimes you’ll need a permit and may also have to pay a relatively small fee for building it. After that, you’ll need to choose the best spot for your cinder block fire pit. You’ll want it to be far enough away from your house, plants, firewood and anything else that it may ignite accidentally. Ideally, your block fire pit should be in the proximity of a water hose in case of fire emergencies.

After you’ve found the “sweet spot”, all you’ll need are 24 fire-resistant cinder block caps, 2 bags of lava rock and a bag of mortar, with an estimated building cost of under $50. Here’s how it should look like: 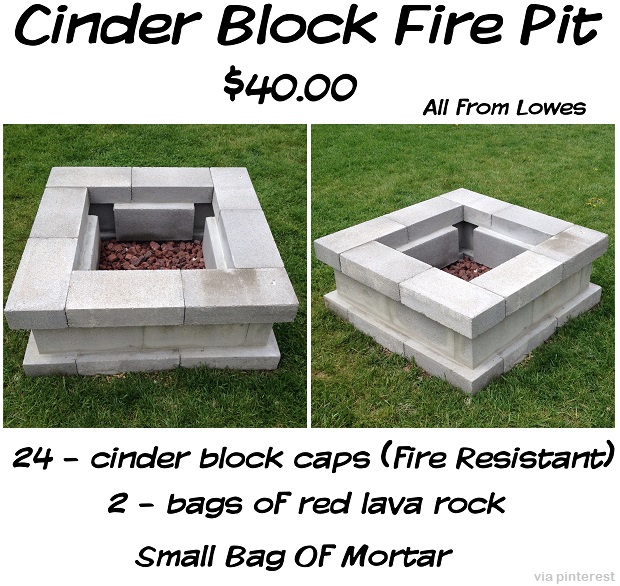 Yes, you can use cinder blocks for building furniture in a way that doesn’t look terrible!

Basically you can put cinder blocks to good use in your cellar for storing your food, gear and whatever else you’d like in whatever style you choose.  This is an example of what a true prepper’s cellar might look like. 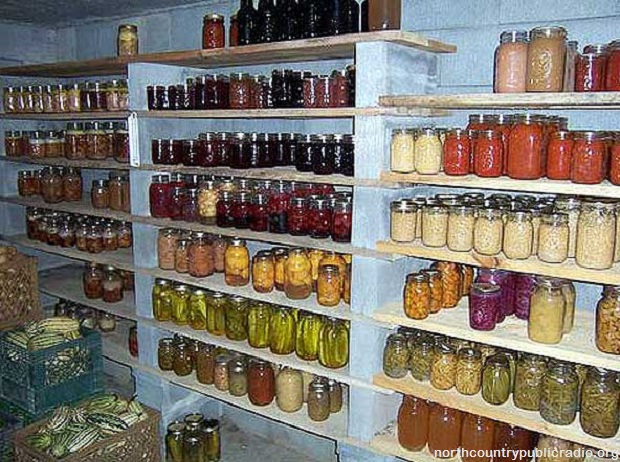 Or you could also read one of our previous articles about how to build your cellar .

Here is yet another great idea for building outdoor furniture using cinder blocks. The main advantage of this DIY project is that it can be done in half an hour with almost no tools required.

The cinder block bench is weatherproof, tough as nails and it looks great! You can decorate it even further; the only limit is your imagination. 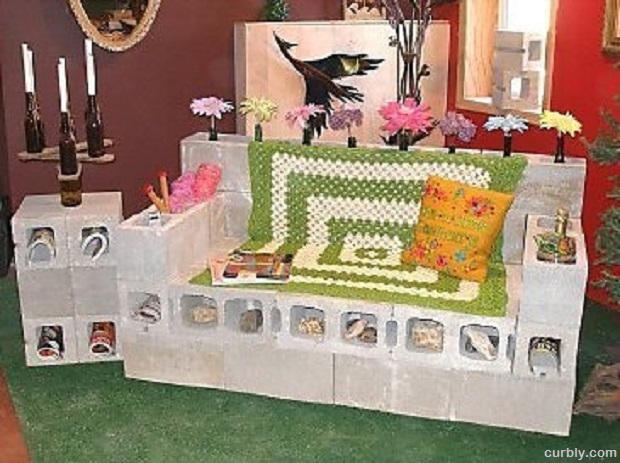 The hardest part of this DIY project is to load and unload the cinder blocks; the rest is a piece of cake.

You may want to add some paint and cushions and voila, for under $30 you can have your own customized outdoor cinder block bench, which comes handy for any occasion.

Just take a look at the picture and figure it out for yourself. With just a few cinder blocks you can build yourself a cool fireplace at next-to-nothing costs, saving you a great deal of money and adding a practical and attractive element to your garden or outdoor space. The best thing about this project is that you can always dismantle it, put it in the back of your truck and relocate it wherever you need it. Since there’s no mortar, glue, nails or anything like that involved in its construction, the cinder block fireplace can be easily moved around with minimal effort.

Or, you can build it in your favorite place and forget about it, as it’s weather proof and it doesn’t require maintenance at all.

As you can see from the pictures, if you’re a DIY enthusiast and you have a little skill and the will, you can build awesome things using cinder blocks. In this case, they’re building steps, which are hugely practical, inexpensive and they look great!

6. Use Cinder Blocks in Your Garden for a Raised Bed Garden

This is a very easy to do, practical and money-saving design for a raised bed in your garden using nothing more than a few cinder blocks and some dirt or potting soil. 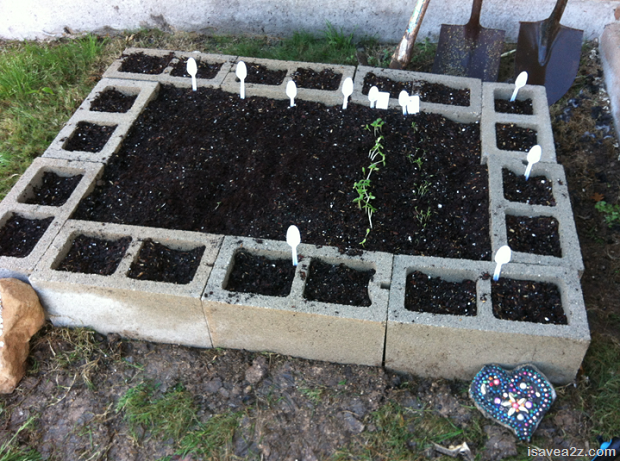 You just have to arrange the cinder block in a rectangular shape, fill the inner spaces with dirt and voila, job’s done!

7. Use Cinder Blocks for Building a Bench With a Twist

Unlike the other outdoors bench project, this one is built next to your house wall which will act like a backrest. You can use pillows for cushioning and you can decorate it in any way you like; the possibilities are endless.

Just take a look at this picture and you’ll understand what I am talking about. Here’s an YouTube tutorial about how to build an outdoor fireplace for your backyard using dirt cheap cinder blocks and a little bit of elbow grease.

You don’t need previous experience; just the will and the skill will get you through. 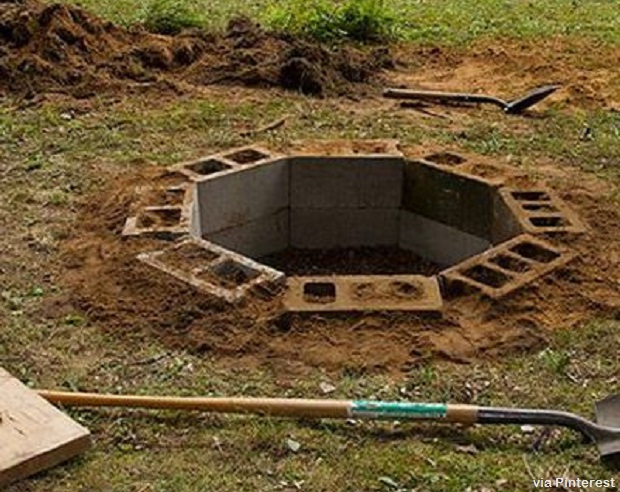 If you take a peek at this pic, you’ll probably think about weird stuff like human sacrifice. Actually, it’s a ground fire pit made from cinder blocks and used for cooking, getting warm or roasting marshmallows on a nice night. It also looks pretty cool, but before starting you may want to check out your local building codes to see if that’s kosher in your area.

Using cinder blocks for this endeavor will require minimal effort, little money and next to zero skills. It’s an awesome project to do with your kids, as it needs only minimal supervision and makes for lots of fun.

You can start with a temporary ground fire pit and you can convert it later into a “permanent” (as in mortared) affair if you decide you like the concept and location. Don’t build it near flammable structures like garages, sheds, overhanging trees or your home.

Also, you can build this baby directly on the ground, with the cinder blocks corralling the flame, but I would advise you to remove 5-10 inches (as pictured) of soil and place the first row of cinder blocks below the ground, thus making for greater stability and safety for your fire circle.

10. Use Cinder Blocks for Building Your Own Swimming Pool Here are a few pictures of some folks who managed to build their swimming pool from scratch with just shovels, concrete and cinder blocks. Ok, and water, but that doesn’t count.

The DIY process is easy to understand and well-detailed if you click on the source link; besides the elbow grease involved in building the swimming pool, the rest is very straightforward, but it is pretty labor-intensive. This is a super-simple project that uses just two cinder blocks and 2×4’s, as you can see it.

If you like to cook and smoke your own meat, this is a must-have item for gourmet enthusiasts. Here’s a video that details the “secrets” of how to build your own smoker.

If you choose to DIY your meat smoker, you’ll save lots of money in the process (it will cost you about 70 bucks) and smoked meat (brisket) is the best there is!

If you are interested, you could also read another Survivopedia article about preserving your meat. Why, you asked? Well, because having a BBQ at home is one of the most fun activities in the world, especially if you have kids. You can throw parties, invite your friends for a steak and enjoy the best tasting food on God’s green Earth.

We’re obviously talking about food cooked on an open flame! If you have lots of friends and/or a large family, watch the video and you’ll see what I am talking about.

Hopefully you’re already familiar with my previous article about rocket stoves, which you can find here. Now, there’s an easy way to DIY your rocket-stove using cinder blocks.

Basically, this is how a dual-burner /6 cinder block rocket stove looks like and how it’s built using cinder blocks and a little bit of magic.

As you already know, rocket stoves are a very simple and highly efficient way to fuel combustion for improved performance via intelligent design. Here’s a comprehensive guide detailing how to build a five-block rocket stove with next to no costs and low skill levels.

For example, you can build a sofa bed with just 42 cinder blocks… …or anything else that you could think of.

As you can see, the possibilities for using cinder blocks for your homestead are virtually limitless.

If you have other ideas, feel free to share your creativity in the comments section below.

This article has been written by Chris Black for Survivopedia
About Chris Black
Chris Black is a born and bred survivalist. He used to work as a contractor for an intelligence service but now he is retired and living off the grid, as humanly possible. An internet addict and a gun enthusiast, a libertarian with a soft spot for the bill of rights and the Constitution, a free market idealist, he doesn’t seem very well adjusted for the modern world. You can send Chris a message at chris.black [at] survivopedia.com.

Survival Dogs: How To Start And Build Your Kennel (2)