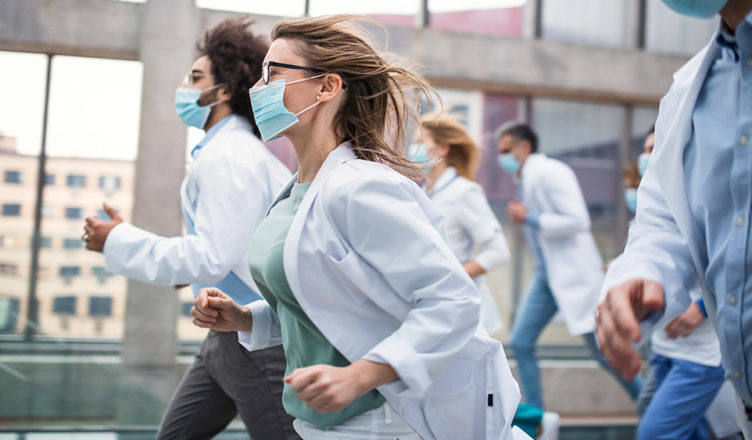 Healthcare workers across the United States are now testing positive for the coronavirus even as they man the front lines against the rapidly spreading pandemic.

The medical professionals who have tested positive for COVID-19 include two ER physicians at a Chicago suburban hospital, two doctors associated with Washington University, a doctor in Austin, Texas, as well as a doctor at a children’s hospital in Wisconsin.

In a statement published on NBC, authorities from Rush Oak Park Hospital in Chicago – the hospital where the first two doctors in this report worked – said they, in cooperation with the Illinois Department of Public Health, are currently assessing the overall risk of exposure that may have stemmed from the two doctors.

“One doctor has not been seeing patients for several days prior when he would have been contagious. The other may have had patient and peer contact and we are assessing the overall risk of exposure, working and advising patients and peers as appropriate,” the hospital said, adding that there is a high likelihood that the two doctors’ cases of the coronavirus were community transmitted.

The hospital, in its statement, emphasized that all 12,000 people who work throughout the Rush Health System have been trained on correct infection protection protocols such as hand washing, gowning and masking.

As reported by the U.K. Daily Mail, news of the two doctors’ diagnoses has prompted the leaders of the Village of Oak Park to enact a shelter-in-place ordinance – the first municipality in Illinois to do so.

Meanwhile, the two doctors who tested positive for the coronavirus at Washington University in St Louis in Missouri, have been quarantined in their respective homes, as reported by KMOV 4.

According to WUSL officials, they are now actively working to identify the people who may have had contact with the two infected individuals.

Speaking about the incident, St. Louis Mayor Lyda Krewson said there is reason to believe that community exposure might already be taking place in the city.

“While we still don’t have any detected signs of community transmission at this time, this case underscores the importance of what our healthcare professionals have been telling us,” Krewson said, adding that individuals exhibiting cold or flu-like symptoms must immediately seek medical attention. (Related: Now 24,000+ confirmed cases in the USA, with 288 deaths, increasing by the hour.)

St. David’s HealthCare, a hospital in Austin, Texas, meanwhile, confirmed that one of its physicians has tested positive for the coronavirus.

According to hospital officials, they are now working to identify any patients or healthcare workers with whom the doctor may have come into contact.

“We will contact patients and providers who may require further observation and/or testing based on our risk assessment,” hospital authorities said in a statement to local Texas station KXAN.

According to St David’s, its workers will continue to follow best practices for preventing the spread of the coronavirus in light of this recent development.

In Wisconsin, 200 patients and health care workers at the Children’s Hospital of Wisconsin were subjected to COVID-19 tests after a doctor working in the hospital was found to be infected with the virus.

The doctor, as reported by the Milwaukee Journal Sentinel, worked with severely immuno-compromised children, including cancer patients.

The doctor, who was not identified to the media, contracted coronavirus while traveling outside of Wisconsin, but worked for a week without knowing his status.

According to hospital spokesperson Andrew Brodzeller, the doctor is currently at home with mild symptoms and is reported to be recovering.

Infected doctors, health workers are just “the tip of the iceberg”

As per an article published by the Washington Post, while there is still no official data on the actual number of workers who have been exposed or infected, at least 60 medical care providers have been confirmed to have tested positive for COVID-19 in the U.S.

Liam Yore, a board member of the Washington state chapter of the American College of Emergency Physicians, in an interview with the Washington Post, said the issue is just the tip of the iceberg.

“The risk to our health-care workers is one of the great vulnerabilities of our health-care system in an epidemic like this,” Yore said, adding that as of present, most ERs and health care systems are already running at full capacity even during normal times.

News of their diagnoses came after the Centers for Disease Control and Prevention (CDC) loosened their guidelines for protective wear, and suggested that health workers don conventional surgical masks when working with symptomatic patients, rather than the N95 respirators that are known to help keep the virus out. In addition, the CDC also recommended that in the event of a supply shortage – a likely event as the public have reportedly hoarded supplies due to panic – medical and health workers could “use homemade masks” such as bandannas and scarves instead.

Many hospitals are also becoming increasingly short-staffed as coronavirus cases continue to come in, thus forcing workers to report for duty – even if they’ve been exposed to the novel coronavirus – just to meet demand.

As of press time, 381,000 have been confirmed to be infected by the COVID-19 coronavirus worldwide, with 16,553 confirmed deaths.

Three Preps Your SHTF Stockpile Cannot Do Without