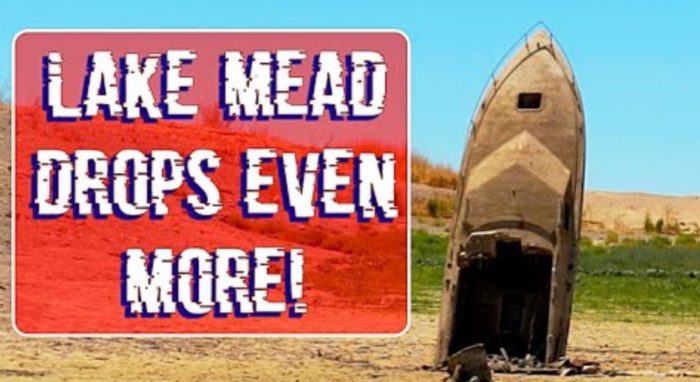 The surface of Lake Mead, North America’s largest artificial reservoir, now stands at 1044 feet above sea level and is dropping fast. If Lake Mead’s water level falls another 149 feet, a dangerous level known as a “dead pool” could wreak havoc across Southwestern US.

Since the beginning of March, Lake Mead has dropped about 23 feet, and compared with the 5-year trend, the reservoir’s water levels are well below average, at the lowest point since the lake was filled nearly a century ago.

A graph might not do justice to visualizing just how fast the water level has fallen. So here are three pictures of a sunken speedboat in the lake and the corresponding date. Just in May, the boat was partially submerged. Now there’s no water.

If Lake Mead were to keep dropping, it could be a couple of years until a danger zone at 895 feet is reached, which is the point water would no longer pass through Hoover Dam to supply California, Arizona, and Mexico. Below 895 feet, the lake would be considered a “dead pool.”

For more context of what’s happened over the last three decades as a megadrought grips the US West, here’s a view of the spillway of the Hoover Dam in 1983 versus 2021.

Weather satellites have captured an absolutely stunning view of the lake rapidly shrinking in the last two years.

Lake Mead and Lake Powell, the 2 largest reservoirs in the US, which provide water to over 40 million Americans in Nevada, Arizona and California, are at their lowest levels ever. This will have unprecedented consequences and require drastic water restrictions never seen before.

A lake observer on YouTuber shows how the water level has dangerously dropped in the last two weeks.

Last week, Tanya Trujillo, the Interior Department’s assistant secretary for water and science, said in a speech, “We have an urgent need to act now.”

If no drastic action is taken and the lake hits dead pool level (read: “The Real Deadpool: America’s Drought Is Worse Than You Think”), millions of people in Arizona, California, Nevada, and parts of Mexico could experience devastating water shortages.