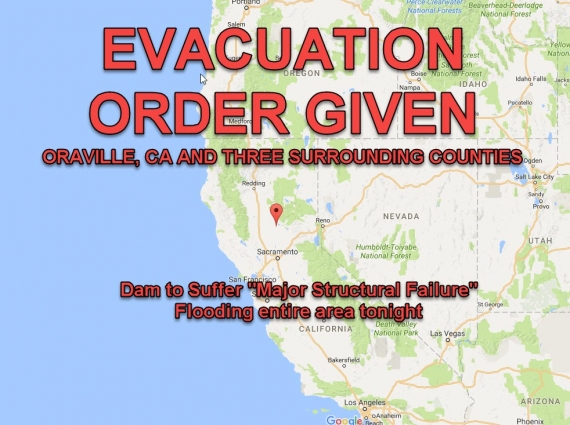 Citizens in Oroville, California and the counties surrounding it have been ordered to Evacuate their homes immediately, because a component of the Oroville Dam – the tallest Dam in the U.S. — is suffering major structural collapse.  Flood wters will wipe out the area within hours.

Residents of Oroville are urged to take Highway 99 or 130 toward Sacramento and get out as fast as they can.

Structural failure of the Auxiliary Overflow Barrier is expected within the hour.  Once that structure collapses, upwards of two cubic MILES of water will be released.

Officials in northern California ordered residents near the Oroville Dam to evacuate the area Sunday after an emergency spillway severely eroded.

The California Department of Water Resources said that the emergency spillway could fail within an hour, unleashing uncontrolled flood waters from Lake Oroville.

People in downstream areas need to leave the area immediately, the department said.

City Government Tells Citizens to GET OUT

City of Yuba City strongly recommends an evacuation of all residents immediately. Travel options are as follows:… https://t.co/rBM3IpL0qx

Maps of Evacuation Zones – All Persons Should LEAVE IMMEDIATELY 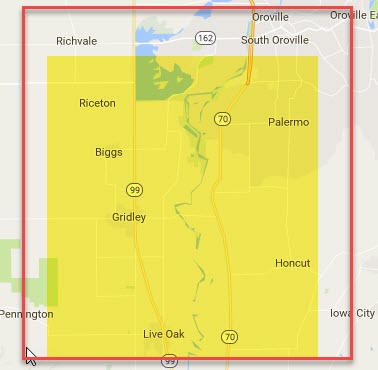 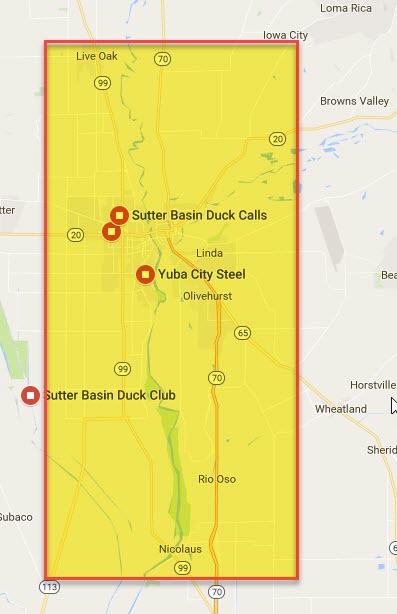 Residents of Oroville, a town of 16,000 people, should head north toward Chico, and other cities should follow orders from their local law enforcement agencies, the Butte County Sheriff’s office said.

The Yuba County Office of Emergency Services asked residents in the valley floor, including Marysville, a city of 12,000 people, to evacuate and take routes to the east, south, or west and avoid traveling north toward Oroville.

The California Department of Water Resources said it was releasing as much as 100,000 cubic feet per second from the main, heavily damaged spillway to try to drain the lake.

Water began flowing over the emergency spillway at the dam on Saturday after heavy rainfall damaged the main spillway.

Unexpected erosion chewed through the main spillway earlier this week, sending chunks of concrete flying and creating a 200-foot-long, 30-foot-deep hole that continues growing. Engineers don’t know what caused the cave-in, but Chris Orrock, a spokesman for the state Department of Water Resources, said it appears the dam’s main spillway has stopped crumbling even though it’s being used for water releases.

About 150 miles northeast of San Francisco, Lake Oroville is one of California’s largest man-made lakes, and the 770-foot-tall Oroville Dam is the nation’s tallest. The lake is a central piece of California’s government-run water delivery network, supplying water for agriculture in the Central Valley and residents and businesses in Southern California.

Everyone. I am in yuba city. 30 miles south of oroville. We can’t even move. Evacuating happening. #OrovilleDam pic.twitter.com/yXJYrrvoSo — SeanD (@MyAmerica120) February 13, 2017

The main “spillway” at the Oroville Dam has completely failed; broken apart across its entire span.  Water which is flowing down (what remains of) the spillway, is now uncontrolled in its route toward the Feather River, eroding the land as it flows.

Here is a photo of the Oroville Dam when everything was OK.  You can see what the main spillway looked like: 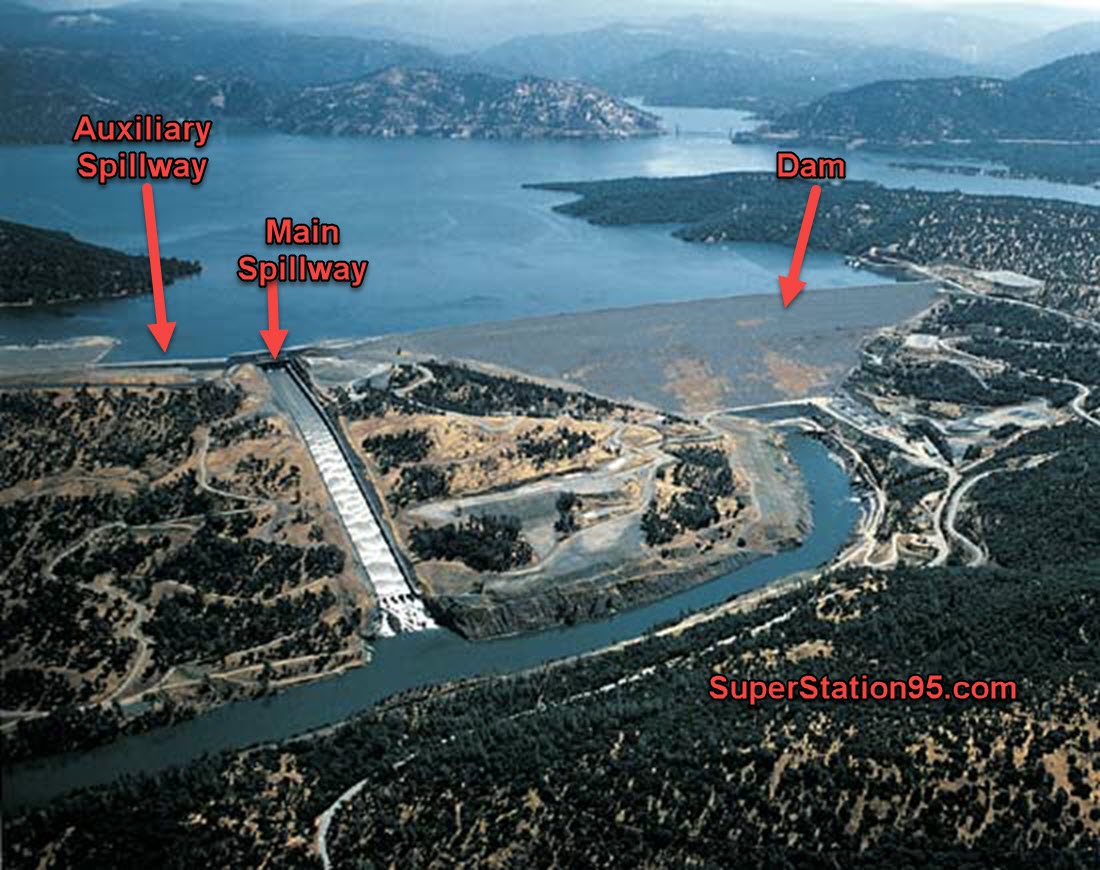 When heavy rains caused rapid water build-up in California last month, the levels in the lak behind the dam rose so fast, that the California Department of Water Resources needed to open the main spillway to drain-off the excess.  The spillway was SUPPOSED to be able to handle 250,000 Cubic Feet Per Second (CFS).  When they opened the spillway and sent 70,000 CFS down it (well within its alleged design) portions of the spillway were lifted up and sheared-off by the water, creating a gaping hole in the spillway. 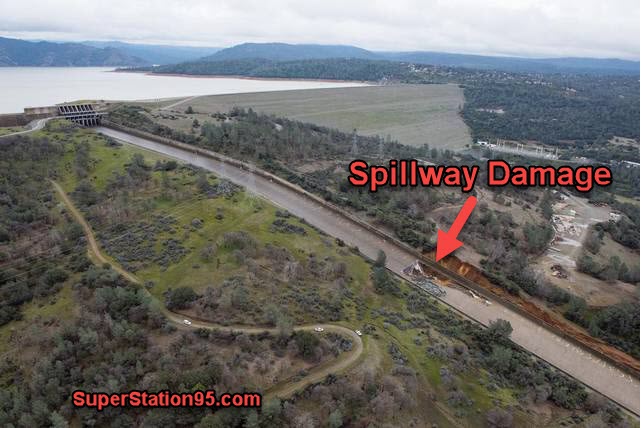 When the damage happened, they stopped the water flow . . .  but that put the dam at-risk, so they opened the main spillway again; which made the damage much worse, until the spillway broke in half as seen in the photo below: 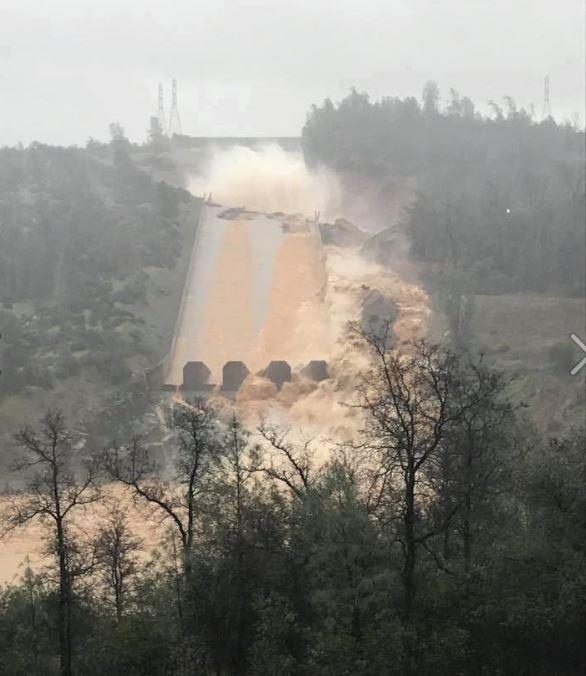 As a result, the water coming down the spillway is eroding the land all around it.  As the lad erodes, there is less land to hold up the dam.  If they don’t get enough water out, and the erosion continues as it is, there won’t be anything to hold back the water.

The Lost ways is a book about lost knowledge that our forefathers had that helped them cross the nation and survive before electricity, cell phones, the internet and so many other modern miracles. I suggest owning the lost ways in book format, so if you find your self without electricity, then you will be able to crack open this book, and use it as a reference. Don’t wait, get The Lost Ways today!