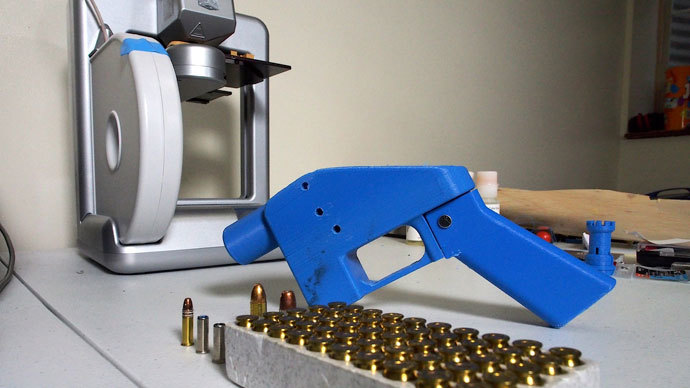 Philadelphia, Pennsylvania has become the first city in the United States to officially ban the use of 3D printers to manufacture firearms, only six months after a Texas-based company published digital blueprints for a homemade handgun.

The 10-member City Council announced last week that its members unanimously approved a first-of-its-kind measure that makes it illegal for anyone within the city to “use a three-dimensional printer to create any firearm, or any piece or part thereof, unless such person possesses a license to manufacture firearms under federal law.”

Discussions have occurred across the country about how to handle a potential wave of homemade guns after Defense Distributed of Texas released the digital computer file that could be fed into a 3D printer and used to produce a fully-functioning firearm this past May. The US Department of State quickly asked the company to pull its files offline, citing a possible violation of International Traffic in Arms Regulations, and the business voluntarily complied with their request.

Other companies have since demonstrated their own variants on the concept of 3D-printed guns, including one group who recently boasted of being able to build a gun using a consumer-grade machine and another that produced a high-powered, fully functioning metal handgun out of almost nothing. But while there hasn’t been a documented example yet of any hobbyists or weapons enthusiasts in Philadelphia firing or even creating 3D-printed guns in city limits, the council has elected to act preemptively in order to install a law that would limit future usage.

“As technology progresses, three-dimensional printers will become more advanced, less expensive and more commonplace,” Councilman Kenyatta Johnson, the bill’s sponsor, said after the vote, according to Think Progress’ Igor Volsky. “As instructions for the manufacture of guns via 3D printing technology are already available on the Internet, we could be looking at a recipe for disaster.”

”It’s all pre-emptive,” Johnson’s director of legislation, Steve Cobb, added to Philadelphia Magazine recently. “It’s just based upon internet stuff out there.”

Robert Sorokanich, a tech writer for the website Gizmodo, called Cobb’s comment “a bit of a head-scratcher,” and asked of the councilmember’s office, “there’s a lot of internet stuff out there, could you be more specific? “

Indeed, the council’s action appear to many to be nothing more than a rushed, would-be solution to something that has yet to plague the City of Brotherly Love. With Philadelphia willing to be the first in the nation to pass such legislation, though, other cities that have been discussing similar bills may see Philly’s success with regards to the law as a sign that that they’d see similar results elsewhere.

As RT reported previously, lawmakers in California, New York City and Washington, DC have all suggested that officials adopt legislation that would limit what 3D printers could produce, particularly after Defense Distributed’s model made waves with the federal government.

“We must be proactive in seeking solutions to this new threat rather than wait for the inevitable tragedies this will make possible,” Sen. Leland Yee (D-California) said earlier this year about efforts to regulate printing technology in her own jurisdiction.

Of course, that isn’t to say that Councilmember Johnson and her colleagues have managed to make such an impact already without their being real worry in Philly about a new wave of violent crime on the horizon. The Verge was quick to note that Philadelphia logged 331 murders in 2012, making it one of the most violent cities in America and certainly one that wouldn’t benefit from a barrage of homemade handguns on the streets.