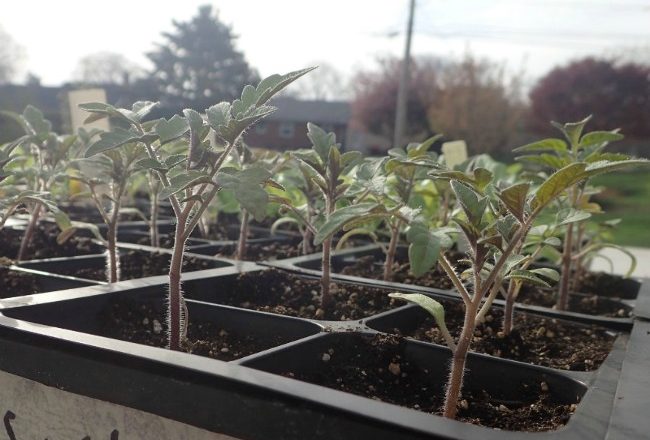 You’ll Have Many More Choices

Heirloom flowers such as Sweet William, Love-in-a-Mist, and Love-Lies-Bleeding offer romance, drama, and fragrance to the garden, and they draw pollinators!

Cornell’s Vegetable Varieties for Gardeners, a citizen science program, describes 562 pepper varieties, 365 lettuces, and an astonishing 853 types of tomatoes. Only a fraction of these can be bought as seedlings. You’ll have a hard time finding the delicious and highly rated ‘Carmello’ tomato in a pot, or one of the great tasting new container tomatoes, or ‘Topepo,’ a sweet Italian heirloom.

Heirloom flowers such as Sweet William, Love-in-a-Mist, and Love-Lies-Bleeding offer romance, drama, and fragrance to the garden, and they draw pollinators!

You Can Control Quality

Even if you are lucky enough to find your desired tomato, pepper, and flower varieties as plants, should you buy them? The answer depends on how well you know the grower. Seedlings that have dried out at some point in their lives or become root bound will not perform well in the garden.

When you grow your own you’ll know that they’re being well cared for until the time is right for planting, and that they’ve been grown without unwanted chemicals.

Seedlings started indoors will thrive when provided with plenty of light and enough water to keep the soil moist but not soggy. Begin feeding them with a half-strength liquid fertilizer when they have two sets of leaves.

Plants grown under poor conditions will not produce adequate foliage or yields.
– UMD College of Agriculture and Natural Resources

Read packets of beans, root vegetables, greens, and other plants for seedling spacing. Sca-er seeds of greens and root vegetables about an inch apart in the garden soil, otherwise plants will be overcrowded and will not thrive.

Read packets of beans, root vegetables, greens, and other plants for seedling spacing. Sca-er seeds of greens and root vegetables about an inch apart in the garden soil, otherwise plants will be overcrowded and will not thrive.

Growing From Seed Is Easier

Larkspur and dill bloom in unison in early summer. Both are easy to grow by sowing seed directly in the garden.

It’s a fact: many plant varieties are more successful when grown from seed sown directly in the garden. These include root vegetables, herbs in the carrot family such as Cilantro and Dill, baby salad greens of any kind, and flowers that are best sown very early in the season, such as Larkspur, Bells of Ireland, and Love-in-a-Mist.

Other vegetables and flowers are so easy to grow from seed that buying seedlings makes little sense. Squash, Melons, Beans, Peas, Sunflowers, Zinnias, Nasturtiums, and Cosmos are a few.

Garden centers routinely sell small blooming transplants. Flowers such as zinnias, marigolds, and celosias will do better in the long run if planted before they bloom—yet another reason to buy and grow seed.

Larkspur and dill bloom in unison in early summer. Both are easy to grow by sowing seed directly in the garden.

Lush, extravagant swaths of color are within your budget. A whole packet of zinnia, sunflower, or marigold seeds can be purchased for about the same cost as a six-pack of seedlings, or even a single seedling in some markets.

A productive vegetable garden can feed your family all year for a fraction of what you would pay for equivalent produce at your local grocer or farmers’ market. An added advantage of buying seeds rather than plants: you’ll be able to sow succession plantings of greens, beans, and other crops for a second harvest!

A 2008 national Gardening Association study estimated that U.S. food gardening households spent an average of $70 a year on their gardens. With a yield of about 1/2 pound of produce per square foot, an average 600-square-foot garden can produce 300 pounds of produce worth $600!

All the flowers of tomorrow are in the seeds of today.
~ Ancient proverb

It’s also magical, and gives you a feeling of independence and, yes, power, to watch a seed germinate and grow into a healthy seedling, connecting you to nature even as frigid weather may be confining you to the indoors. The real question is … why not grow your garden from seed?

Moisten the soil mix to the consistency of a wrung out sponge before planting seeds in multipacks or recycled containers from the grocery store. A good rule of thumb for starting tomatoes, peppers, eggplants, and annual flowers: Plant two to three seeds in a cell and thin to one when the seedlings grow their first set of true leaves.

GET MORE FROM YOUR VEGGIE GARDEN THIS YEAR

Is It Time To Revive “Survival Gardens?”