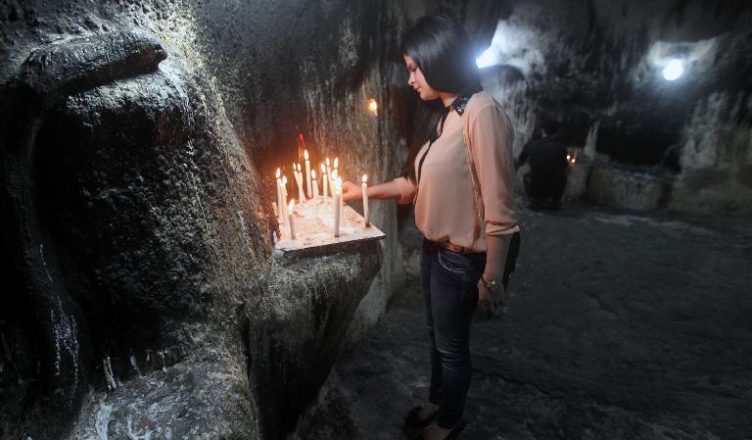 Baghdad (AFP) – Awshalim Benjamin is desperate to leave Iraq, where a sack of faded photographs is all that remains of the happy life he and his ancient, dwindling Christian community once knew.

The 74-year-old waits by the phone for the call that will tell him he can finally depart Baghdad to join his family in the United States — and leave behind a 2,000-year-old community that has shrunk by more than half since the 2003 US-led invasion of Iraq.

The patriarch of the Iraq-based Chaldean church, due to join other Middle Eastern Christian leaders at a meeting with Pope Francis this week, has urged Christians to stay and spoken out against Western countries offering visas to the rapidly shrinking minority.

But many still say they have no choice, as their tenuous optimism after a brief improvement in security starting in 2008 has been dashed by a surge in bloodshed this year.

“If my chance came, (I would leave) today,” Benjamin, a retiree who cares for an ill 33-year-old daughter, said.

“When they call me (and say) come, I will leave everything and go.”

It wasn’t always like this. The black-and-white photographs of Benjamin show a handsome young man who played the accordion and enjoyed pole-vaulting. He had a government job, got married and had a family.

But now those days are long gone.

Christians in Iraq are rarely explicitly targeted — as they were during the height of the country’s sectarian bloodletting in 2006-2007 — but the daily attacks and bombings have made life unbearable.

“I won’t stay in such a situation,” said Benjamin, sitting in his home in the south Baghdad neighbourhood of Dura, the plastic bag full of photographs on his lap.

“Three days ago, they exploded a car on the street. Such things are making us leave this place.”

Before 2003 more than a million Christians lived in Iraq. Now there are around 400,000, according to Chaldean Patriarch Louis Sako, head of one of the world’s oldest Christian communities. 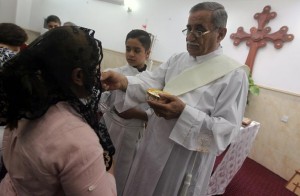 Baghdad has seen a dramatic fall in its own Christian population, which at one point numbered 600,000.

According to Archdeacon Temathius Esha, an Assyrian priest in Dura, the neighbourhood’s Christian population has all but disappeared, from around 150,000 shortly after the 2003 US-led invasion to about 2,000 now.

Though home to seven churches — Assyrian, Chaldean and Syriac — Dura now has only two priests.

Esha’s 500-capacity St. Shmooni Church attracted just 20 people for a recent Friday service, and he said only about 150 show up for Christmas or Easter.

The priest’s own family lives in the town of Ainkawa in Iraq’s northern Kurdish region, which has been mostly spared from the violence plaguing the rest of the country.

“Sometimes, of course, I feel I want to leave, but it’s my job to stay with our people here,” the 54-year-old said.

But when asked if he thought the situation would improve, Esha’s only response was a resigned laugh.

The flow of Christians out of the country spiked in 2010, when thousands fled after Al-Qaeda massacred 44 worshippers and two priests in a Baghdad church in October of that year, according to the UN High Commissioner for Refugees.

Some 61 churches have been attacked in the decade since the US-led invasion, Sako said, with more than 1,000 Christians killed in violence, albeit not all in targeted attacks.

As Baghdad’s Christian community has dwindled, the Christian population of Ainkawa has expanded to the point where the once tiny village is now effectively a suburb of the nearby Kurdish regional capital Arbil.

One of Ainkawa’s three churches holds eleven masses on Sundays, and authorities want to build three more, according to Chaldean Archbishop Bashar Warda.

But he says his flock has little hope of returning to their ancestral homes.

“We don’t have that much time to think about the golden days and the beautiful memories that we had in Baghdad,” said Warda, who grew up in the Iraqi capital.

“I would say 99 percent of those families (who moved to Ainkawa) would not think to go back again… Maybe I am too pessimistic, but the reality is this.”

Sako, the Chaldean Patriarch, has urged Christians to stay in the country and criticised Western nations for offering priority visas to members of the minority.

“We are also Iraqi citizens … and we have a role to play here.”

Asked what he told Christians who want to leave, Sako said: “I am telling them, you have to be patient and also to have hope in the future.”

Those words ring hollow for Benjamin.

“Let him be in our place, and live in our situation, then let him decide whether we should leave or not — he lives in a very secure place, not like us, in the street,” he said.

“There were beautiful moments in Iraq, when there was a good security situation and safety… But for now, all those beautiful days have vanished. We live in a prison.”

Landing Strips, Farms and Hideaways: Secret Escapes of the Elite: “The Rich Are Worried and They Should Be”