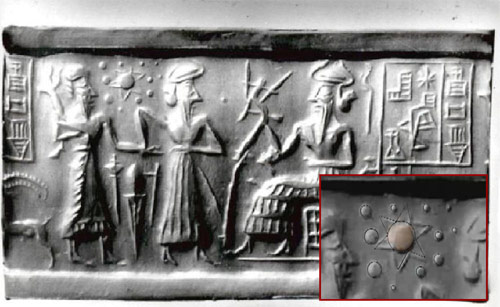 A 6,000 year old cuneiform script found in ancient Sumeria has long been at the forefront of debates between scientists and researchers. According to the famed Sumerian researcher Zecharia Sitchin one of the tablets depicts the solar system. What’s most interesting according to Sitchin is that the “solar system” shown in the text includes references to planets like Neptune and Pluto, which were not discovered until the advent of the telescope, about six millenia after the disappearance of the Sumer civilization. What has baffled researchers studying the tablets is that the cuneiform script shows the existence of another planet, one we have yet to discover, and that some have dubbed Planet X – the tenth planet.

Some experts have discounted Sitchin’s findings, saying that he had misinterpreted the texts. But years after his analysis, as scientific interest into the outer reaches of our solar system increased, more information has come to light. The latest discovery, according to Fox News, proves beyond a doubt that there do exist large planetary objects past the boundaries of Pluto and Neptune, and they could be larger than Earth.

There is evidence of at least two planets larger than Earth lurking in our solar system beyond Pluto, a new analysis of “extreme trans-Neptunian objects” reveals.

After studying 13 of these “extreme trans-Neptunian objects,” or ETNOs, the obits of these objects are different from a theory that predicts the orbits.

“The exact number is uncertain, given that the data that we have is limited, but our calculations suggest that there are at least two planets, and probably more, within the confines of our solar system,” Carlos de la Fuente Marcos, scientist at the UCM and co-author of the study, said in a statement Friday.

The new results may give way to evidence of the existence of Planet X, which is a rumored object as far away as 250 astronomical units from the sun and 10 times larger than Earth.

With the current instruments available to scientists, it is nearly impossible to spot these objects.

But this data is not unique in and of itself. Over the last several decades scientists have found a variety of signs that there is, in fact, a Planet X lurking out there somewhere. At one point they had identified perturbations, or gravitational disturbances, around Neptune suggesting that a large, and as of yet unseen, body was pulling on the planet. But the perturbations were quickly discounted during Voyager 2′s flyby in 1989 when new calculations suggested that we had underestimated Neptune’s original size.

But the evidence didn’t stop there. In 1983, for example, a chief scientist as NASA announced that their infrared telescope had identified a heavenly body “possibly as large as the giant planet Jupiter” sitting beyond Pluto. 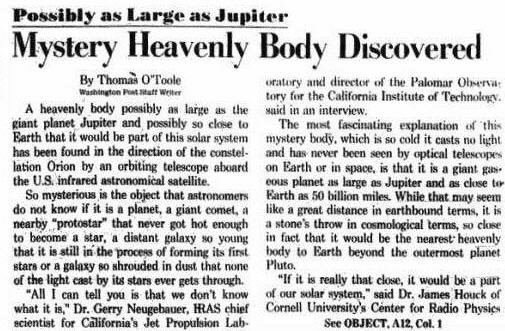 What was most surprising about this announcement is that no mention of it was ever made again. The research associated with the find simply disappeared from public view.

But as the Mayan Doomsday approached in 2012 there was a renewed interest in Planet X. A variety of civilizations throughout history had made mention of the existence of a massive body that passed close to earth. In the book of Revelation, for example, there is mention of a “star” called Wormwood, the passing of which will lead to a massive rise in the waters across the globe.

The name of the star is called Wormwood; and a third of the waters became wormwood, and many men died from the waters, because they were made bitter.

Native American civilizations in the Southwestern United States as well as Central and South America even made petroglyphs of such an object, often depicted in the form of a spiral, which brought flooding and devastation and forced people to higher ground: 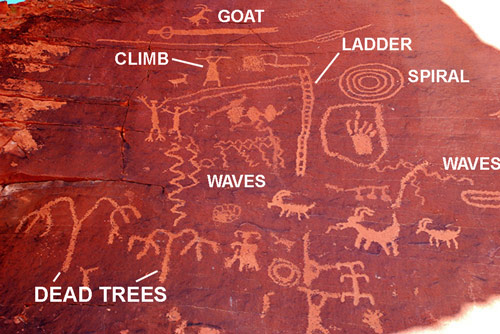 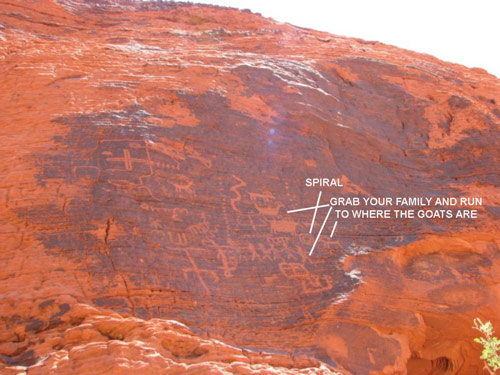 The stories of civilization-ending floods are not unique to just Native Americans, and appear in various other historical and religious texts, including the Bible.

This, of course, has led to all sorts of speculation as to whether or not Wormwood, Nibiru, Nemesis, Planet X, or the Blue Star was about to make another near-earth passage. Were it to occur, the the gravitational disturbances it would cause would be nothing short of catastrophic because researchers say it would create mega-Tsunamis, earthquakes and volcanic eruptions all over the planet.

For all intents and purposes in such a scenario we would be facing a cataclysmic extinction-level event.

Alas, the passage of Planet X didn’t happen on 2012, giving humanity a reprieve on Armageddon.

But that’s not to say it can’t happen again in the future (if that’s in fact what happened in the past). Some estimates suggest that if there were a Planet X, it may orbit the sun on a roughly 3,000 year cycle – perhaps even more. Further, as noted in the most recent research published by Fox News, the tenth planet may be on a completely different orbit then we are used to, so it is quite possible that we wouldn’t see (or feel) it until it was almost right on top of us.

The other danger, as explained by CNN, is that even if the 10th Planet doesn’t do a near-earth fly-by, it could send large swaths of asteroids or comets our way:

What do you think? Is the rumored Planet X lurking out their somewhere in our solar system? And if so, could it potentially be on an orbit that intersects closely with earth at some point in the future?