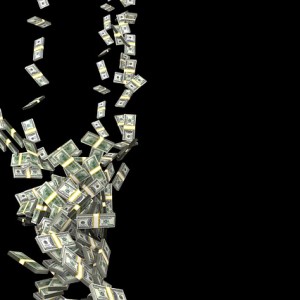 Mark this day on your calendars. The Dow is at 16974, the S&P 500 is at 1982 and the NASDAQ is at 4549. From this day forward, we will be looking to see how the stock market performs without the monetary heroin that the Federal Reserve has been providing to it. Since November 2008, the Fed has created about 3.5 trillion dollars and pumped it into the financial system. An excellent chart illustrating this in graphic format can be found right here. Pretty much everyone agrees that this has been a tremendous boon for the financial markets. As you will see below, even former Fed chairman Alan Greenspan says that quantitative easing was “a terrific success” as far as boosting stock prices. But he also says that QE has not been very helpful to the real economy at all. In essence, the entire quantitative easing program was a massive 3.5 trillion dollar gift to Wall Street. If that sounds unfair to you, that is because it is unfair.

So why is the Federal Reserve finally ending quantitative easing?

Well, officially the Fed says that it is because there has been so much improvement in the labor market…

The Fed’s language, however, did suggest that they were getting more comfortable with the economy’s improvement. It cited “solid job gains,” citing a “substantial improvement in the outlook for the labor market,” as well as pointing out that “underutilization” of labor resources is “gradually diminishing.”

But that is not true at all.

The percentage of Americans that are working right now is about the same as it was during the depths of the last recession. Just check out this chart…

So there has been no “employment recovery” to speak of at all.

And as I wrote about yesterday, the percentage of Americans that are homeowners has been steadily falling throughout the quantitative easing era… 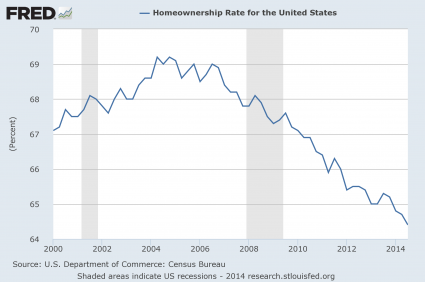 So let’s put the lie that quantitative easing helped the “real economy” to rest. It did no such thing.

Instead, what QE did do was massively inflate stock prices.

Mr. Greenspan’s comments to the Council on Foreign Relations came as Fed officials were meeting in Washington, D.C., and expected to announce within hours an end to the bond purchases.

He said the bond-buying program was ultimately a mixed bag. He said that the purchases of Treasury and mortgage-backed securities did help lift asset prices and lower borrowing costs. But it didn’t do much for the real economy.

“Effective demand is dead in the water” and the effort to boost it via bond buying “has not worked,” said Mr. Greenspan. Boosting asset prices, however, has been “a terrific success.”

Moving forward, what did Greenspan tell the members of the Council on Foreign Relations that they should do with their money?

Mr. Greenspan said gold is a good place to put money these days given its value as a currency outside of the policies conducted by governments.

It almost sounds like Greenspan has been reading the Economic Collapse Blog.

Since November 2008, every time there has been an interruption in the Fed’s quantitative easing program, the stock market has gone down substantially.

Will that happen again this time?

Well, the market is certainly primed for it. We are repeating so many of the very same patterns that we saw just prior to the last two financial crashes.

For example, there have been three dramatic peaks in margin debt in the last twenty years.

One of those peaks came early in the year 2000 just before the dotcom bubble burst.

The second of those peaks came in the middle of 2007 just before the subprime mortgage meltdown happened.

And the third of those peaks happened earlier this year.

You can view a chart that shows these peaks very clearly right here.

The Federal Reserve appears to be confident that the stock market will be okay without the monetary heroin that it has been supplying.

But it should be deeply troubling to all Americans that this unelected, unaccountable body of central bankers has far more power over our economy than anyone else does. During election season, our politicians get up and give speeches about what they will “do for the economy”, but the truth is that they are essentially powerless compared to the immense power that the Federal Reserve wields. Just a few choice words from Janet Yellen can cause the financial markets to rise or fall dramatically. The same cannot be said of any U.S. Senator.

We are told that monetary policy is “too important” to be exposed to politics.

We are told that the independence of the Federal Reserve is “sacred” and must never be interfered with.

I say that is a bunch of nonsense.

No organization should have the power to print up trillions of dollars out of thin air and give it to their friends.

The Federal Reserve is completely and totally out of control, and Congress needs to start exerting power over it.

The first step is to get in there and do a comprehensive audit of the Fed’s books. This is something that U.S. Senator Ted Cruz called for in a recent editorial for USA Today…

Whether you agree with Ted Cruz on other issues or not, this is one issue that all Americans should be able to agree on.

If you study any of our major economic problems, usually you will find that the Federal Reserve is at the heart of that problem.

So if we ever hope to solve the issues that are plaguing our economy, the Fed is going to need to be dealt with.

Hopefully the American people will start to send more representatives to Washington D.C. that understand this.