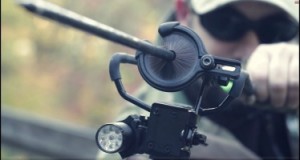 The Survival Slingshot Archer is one of those pieces of equipment that I both like and dislike.  Allow me to explain.  First, let

me admit up front that I’m no expert with a slingshot.  I used to make my own when I was a kid and I even owned a wrist rocket for a brief splendid period of time until my mother caught me shooting at things I shouldn’t have been shooting at and took it away.  After that I didn’t really have much interest in them until I was asked many many years later if I wanted to try out a fancy (by my standards) new slingshot.  Hell yeah!  Bring that baby on!

By Jarhead Survivor, a contributing author of SHTFBlog & Survival Cache

What was cool about this one is that you could also mount an arrow rest on it and shoot arrows with it.  How cool is that? Before I did that I took it out it with my father and my son and we spent some time shooting rocks and ball bearings through it.  Using it as just a slingshot it’s lethal.  We had a competition shooting at a Coke can and I was the first to hit it with a rock at about thirty feet and the rock went clean through the can!  I was surprised and pleased figuring here was something you could take down small game with.  Squirrels for sure and maybe even a rabbit if you caught it just right.

I kept the Survival Slingshot Archer in the toolbox in my truck and pulled it out here and there and had some fun with it.  Then I finally put the arrow rest on it and took a few shots in my basement where I have an indoor archery range set up.  I was less than impressed with it, but figured I’d wait until I got outside and gave it a fair shake.

A short time later I was in the woods with the Survival Slingshot Archer and decided to make a short video.  As you will see, my results were less than stellar.

Watch the video and you’ll see that I pretty much suck shooting arrows with it.  Check it out:

Have you ever picked something up like a gun, or bow, or knife, and just knew that this was what you were going to be good at?  You liked the feel of it in your hand, the weight of it, the way it lined up?  Well, this was the opposite of that feeling when I tried to shoot arrows with the Survival Slingshot Archer.

First, it was difficult for me to aim with it.  Then I had to figure out how to release so it would not fly sideways out of the pouch.  Overall it wasn’t a good feel for me.  Some people might try and edit the video so they look good shooting it, but I thought I’d leave in the part where I get frustrated so you could get an idea of what I was doing.  You’ve all been there before with something I’m sure.  Well, here it was for me.  For some reason me and the Survival Slingshot did not click when it came to shooting arrows through it.  It’s a good, rugged, piece of equipment

Overall, I really liked shooting rocks and ball bearings with it.  It was fast and I even got to the point where I was semi-accurate with it.  There’s a compartment in the handle where you can store matches, fishing gear, and other small survival tools, which is a pretty good idea. When shooting arrows I was worried that the velocity wouldn’t be enough to penetrate a small animal.  Maybe others have had really good luck shooting arrows with it, but I wasn’t one of them.  I’d give it five stars shooting ball bearings and rocks and two stars with the arrow adapter.  Anybody out there have any experience with this type of set up?  Any advice for getting better with it?