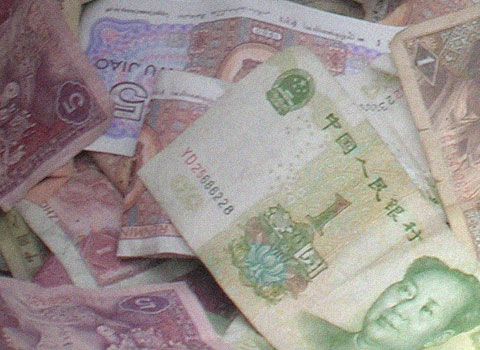 It looks like things are moving a lot faster than anyone could have imagined.

Last week, reports circulated that China was positioning itself to become the world’s next reserve currency, and even putting up billboards advertising the global importance of the renminbi to travelers in the Asian world.

Now, China is making public moves to make that a formal reality – a process that has been going on behind the scenes at least since the 2008 financial crisis. China’s leaders are reportedly in talks with the IMF about the process of drafting the renminbi into the Special Drawing Rights (SDR) basket of currencies, which include the U.S. dollar, the British pound, the Euro and the Japanese yen.

China is pushing for the International Monetary Fund to endorse the Chinese yuan as a global reserve currency alongside the dollar and euro.

A senior Chinese central bank official said Thursday that the country is “actively communicating” with the IMF on the possibility of including the yuan, or RMB, in the basket of the Special Drawing Rights (SDRs).

Including the yuan in the SDR system would allow the IMF to recognize the ascent of the world’s second-biggest economy while aiding China’s attempts to diminish the dollar’s dominance in global trade and finance.

“We hope the IMF can fully take into account the progress of RMB internationalization, to include RMB into the basket underlining the SDR in foreseeable, near future,” said Yi Gang, vice governor of the People’s Bank of China.

The timing is no coincidence, as the International Monetary Fund (IMF) is scheduled for an end of 2015 review of its basket of currencies, a process which takes place only twice in 10 years.

China would need to satisfy the Washington-based lender’s economic benchmarks and get the support of most of the other 187 member countries.

“No matter whether and when the RMB will be included in the SDR basket, China will push on with its financial sector reform and opening-up,” Yi said.

The decision to include China’s renminbi in the SDR would be made formally on the basis of the its annual trade volume, and its evaluation status “as a freely usable currency,” among other factors. China should have little trouble here. In 2013, the yuan surpassed the euro to become the second most used trade-financial currency in the world and was recognized by the SWIFT system for reaching the top five world payment currencies as of the end of 2014:

“It is a great testimony to the internationalisation of the RMB and confirms its transition from an ‘emerging’ to a ‘business as usual’ payment currency,” Wim Raymaekers, Head of Banking Markets at SWIFT said in a statement. (source)

Informally, the IMF’s decision is also based on politics, with China’s rise in world power at the forefront, and the increasing significance of the BRICS nations difficult to overstate.

Though it may not be recognized by the average person on the street, these changes have made the renminbi a significant counterweight to U.S. dollar dominance, and signal a tectonic shift away from U.S. hegemony and the decline of the petrodollar’s power.

The coming decision to include China as a major weight of global reserve currency is a huge move, even as many have seen it coming.

The scheme to fade out the dollar as the world’s reserve currency and bring the SDR to the forefront, with the inclusion of the renminbi, has, of course, been in the works for several years at least.

Kurt Nimmo reported on the IMF’s global currency plan as far back as 2010, when the now-defamed Dominique Strauss-Kahn headed the IMF:

“Over time, there may also be a role for the SDR to contribute to a more stable international monetary system,” said Dominique Strauss-Kahn, managing director of the IMF. He said there are some “technical hurdles” involved with SDRs, but he believes they could help correct global imbalances and shore up the global financial system.

Following the onset of the engineered global financial crisis in 2008, the so-called BRIC countries – Brazil, Russia, India and China – led primarily by Russia and China, have called for dumping the dollar and moving into a global currency scheme. The SDR facility stands ready.

The IMF and the globalists plan to elevate China and undermine the United States. Strauss-Kahn told reporters last June in a news briefing that he believed there would be more pressure to include yuan, also known as the renminbi, among SDR currencies.

Early in 2009, China issued an aggressive call to dump the dollar and move into SDRs.

The IMF cooked up the SDR scheme in 1969. It was originally intended to be the primary asset held in foreign exchange reserves under Bretton Woods, but after the collapse of that system in the early 1970s – a victim of the bankster plan to send the U.S. deficit into the stratosphere – SDRs took on a far less important role.

How long until we officially have a one world global currency?