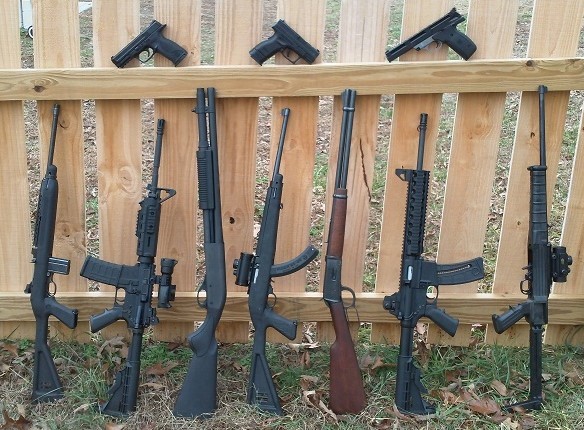 First off, I want to acknowledge that there is no one right gun – not for everyone and not for every task. Firearms diversified for a reason. I’ll touch on some specific types, calibers, and platforms here, but mostly just as examples. This isn’t a “buy this” article of 5/7/10/14 “must-have” guns for preppers. This focuses on general factors and options to consider.

For people on a budget, working through a mindful selection process when buying a gun is even more important than others. It’s less likely they’ll be adding to either their arsenal or ammo stockpile as much or as quickly as those with more disposable income.

It also applies to beginners and preppers who face encumberments like regulations, limited range access, and unsupportive spouses/housemates (of either preparedness or firearms).

Really, though, all of us can benefit from weighing pro-con’s and some general checkpoints before we pull the trigger on a purchase.

Our specific shooting plays an enormous role in how much gun we need. It’s a huge topic on its own, one that deserves the focus of an article. The factors here apply to any firearm, for any purpose. Along with them, though, keep the most-likely and immediate-need use(s) in mind. (Preexisting armory and human resource capabilities/limitations, too.)

Some foreign ammo is inexpensive enough to buy and ship in bulk, so whether or not it’s ever on brick-and-mortar store shelves might be irrelevant. Flip side: What if we have to leave/lose our stockpile? How easy will it be to source that caliber during grabs and “after”?

There’s no one right answer. Plenty have gone with AK, SKS, Mosin-Nagant’s, and others. Plenty lean homegrown/NATO. Personally, I love my ugly hack-chop sporterized 8mm Mauser K98/98k Frankengun … but I love her as a hunting, fun-fire, and “some situations” home-defense rifle, not a bugout platform.

Ammo origins is just a consideration we need to weigh.

There are two big draws to common calibers, and a drawback. Bad news: The most common calibers are the most likely to disappear and skyrocket in price during grabs. Good news: Common calibers are generally less expensive during “normal” times than new and less-common ammo, and they typically come in a wide range of off-the-shelf loads and bullets/molds and powders. The variety gives us a lot of versatility.

These are the ones that are more immune to the gun grabs, as well as to lowered availability when imports and manufacturers refocus and go all-balls after the NATO and AK rounds disappear and jump in price.

They’re common enough to already be on shelves, and common enough that in any group of 15-20 hunters, CCW’ers, and sports shooters we’re likely to find at least one carrying them. They’re just not as popular (or, not anymore) so they’re available longer.

If grabs and post-event resupply are a concern, remember not to get too carried away with finding an “other” caliber. We may want to avoid the grabbed/gone calibers, but we also want to avoid something super oddball that isn’t on shelves or belts routinely at all.

Some calibers are continuously upgraded and tweaked by cartridge manufacturers, increasing our versatility. For instance, check out the range of shot shells now available for center fire pistol calibers (and some rifle). #12 and #9 shot shells are most common, but other sizes are out there, such as #4 – a nice, multi-function pest, small game, and even defensive round.

Some calibers are just all-around workhorses, though, and have been “forever”.

There is a 12-gauge round for everything – punch body armor or a coolant reservoir past a grill using a full-saboted rifle bullet, hunt anything, make doorknobs disappear without endangering anyone past them, offer LTL interrupters/distractions, guide rescuers with flares, and for-real throw the confetti for the after party.

I don’t think of .30-06 as a ridge-to-ridge antelope caliber (more ditch-to-ditch, heavy brush and cornfield stubble), but there’s nothing in North America I can’t hunt with a factory-shipped load, from prairie dog to bear.

Even a .22LR semi-auto leaves some options with standard ammo and pellets, and if we check the gun specs, some really nice zingers. Bolt, lever, and revolver guns can take advantage of more options yet.

*The basic 10/22 and S&W 22A willingly run almost anything (although neither will fully chamber the three sub-sonics I stock), but many .22LR semi-autos, especially pistols, are picky about ammo. The most-common fails are in generating enough force to cycle completely and feed refusals.

There’s all kinds of versatility – chamber inserts for additional calibers, dual-caliber double-barrels, even guns that share magazines, sometimes across a wide range. Some are quick switches to change calibers, and some pop out of the box ready to shoot multiple calibers. That versatility increases our options – especially the latter two.

Beyond the 5.56/.223 and .308/7.62 compatibility, some AR and Steyr AUG platforms have simple conversion kits and-or let us change the upper and mags to go between those two/four, .22LR, and pistol calibers (and others, but remember affordability/accessibility and primary purpose during caliber selection.)

Similarly, a revolver with switch-out cylinders for .22LR and .22 Mag/WMR gives us a lot of options, especially as a hunting or bugout sidearm that lets us avail ourselves of super-quiet primer-only sub-sonics while retaining a harder-hitting, further-distance caliber.

Then there are rifles, shotguns and handguns that let us go between calibers without any conversions or swaps.

That includes firearms that accept .45 Long Colt cartridges and .410 bore shells – slugs or pellets – and some that add .454 Casull. The .410 opens up a lot of options alone, from the off-the-shelf rounds to the inserts for other pistol calibers.

*2.5” 410 adapter inserts are better than the shorter .45LC inserts for .22LR, but they’re still not accurate enough for hunting even when you precisely, consistently align them in the chamber/cylinder.

The .45LC is also fairly versatile. There are some factory-manufactured self-defense sizzlers, medium-large game hunting loads, and Big 4 shot and #9 as well as snake shot/window sill bird shot. If we reload our own, our options increase further still with .45 ACP bullets.

Rifles and revolvers for .357 can handle .38 Special without any changes. That lets us readily adapt ammo loads for practice, sports, shooters with recoil sensitivity, self-defense personnel rounds for both penetration and spreading, #4 shot cartridges, rounds that can handle glass, and rounds applicable to small, medium, and even some large game.

No, I’m not talking about the water-on-gremlin effect that takes over once we enter the gun game. I’m talking about selecting a platform that can evolve with us – our skills, our desired uses, even our family members.

We want a gun that, if we need or want, can take a rail without much issue, for either red-dot optics or magnified scopes, easily accepts a sling, and gives us the option of a pistol grip or shortening the stock and using a buffer pad. Customization’s become more numerous, easier, and less expensive with one of the platforms that’s been around for a while and retained popularity.

It applies to caliber, too. Especially if we budget hard, we don’t want to limit ourselves too much with a caliber that’s too much as we age, or too hard for family to use. However, we also want to watch for excessive limitations in range and effectiveness.

When we’re making our firearm selections, the ability to source mag replacements and toss reloads to partners should weigh in there (looking extra-hard at you, H&K AR’s). Being able to upgrade to reliable, hard-use magazines like Chip McCormick or Wilson Combat can weigh high, too.

Action is bottom of the list for a reason. Need for semi-auto and detachable-magazine speeds is purpose driven. For slow, aimed hunting and some DMR/over-watch work, it’s irrelevant.

For some of the exceptions, if you can reload it quickly (stripper clip vs. either type of tube mag; swing cylinder vs. loading-chute revolver), you can practice enough to close and eliminate the gap.

Ease of operation, ease of maintenance, functioning “dirty”, resilience to hard knocks, and the checkpoints above are each more important than action type.

So is total cost. If you can’t get to a range or afford practice ammo and-or training, among others, the gun isn’t going to be much use when it’s needed.

There’s the initial cost of a gun. Then there’s cost for training ammo so we develop muscle memory. Some of that can be accomplished with snap caps – more and less effectively by platform – or a laser. Even so, eventually, we do need to get the barrel dirty.

*Practice round tip: Don’t buy round-nose or wad-cutter practice rounds based on what’s cheap or what has the tightest group. Select the one that shoots the most like our pick hunting and self-defense rounds.

That means some range time. Maybe we already have our own, or we’re scrounging backstops or paying for a rental lane/membership.

We’ll need to get it dirty with periodic maintenance practice, too – more often if it’s a platform that presents a stoppage with every trigger pull using those snap caps (semi-automatics, versus lever guns, pumps, bolt guns, and revolvers). So, more ammo and more range time.

We need something to keep ammo and a light in for creak-in-the-night guns, but we can usually fill that need from stuff already in the house. Even good slings aren’t overly expensive or they, too, can be DIY/upcycle/repurposed projects.

For a handgun, we’ll usually and eventually need holsters – holsters, plural, because we rarely find “it” on the first try, and, what we’re doing is likely to change our wear of a sidearm.

Plus we’ll want our prepper stockpile of purpose-driven ammo, and enough extra that we can keep shooting through the next ammo grab without eyeing that stash.

Other costs that could add to the total are stripper or speed clips, spare and better magazines (especially pricey factory-only mags), and cleaning kits.

Knowing what we’re really looking at spending can help us decide what gun we can afford.

There are plenty of opinions on the “perfect” gun, but we’re all different, with different family/group considerations and different daily and emergency circumstances. Our firearm choices should reflect those differences. Decide on the highest-priority gun based on your most-likely uses and needs, and the factors above that matter most.

Work the true costs. It may mean returning to the starting block, and that’s okay. Make the effort to find a best-fit model for you. It’ll pay off in the long run.