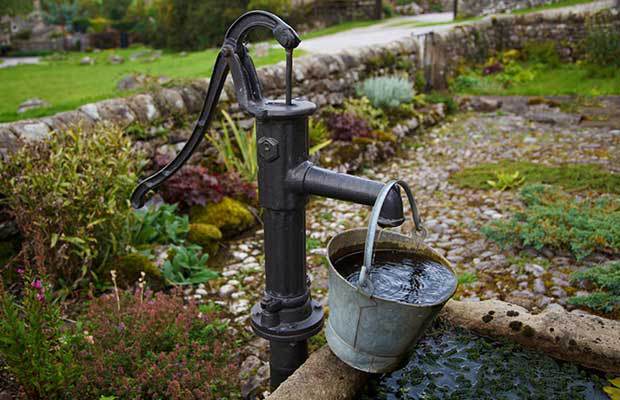 As recently as 100 years ago, the most important site consideration for homesteaders and villages was whether plenty of good water was within easy reach. When electric power lines and drilled water wells reached rural areas, however, close proximity to clean water became immaterial – or so we assumed.

Our nonchalant attitude regarding water is rapidly changing, according to well pump installers I spoke with recently. Many are seeing an upsurge in interest by homeowners wanting to learn about and fit hand pumps to their water wells. There are now numerous manually-operated water pumps to choose from, depending on factors such as static (resting) water level and output needed.

An increase in powerful storms with longer power outages is one factor inciting people to think about manual pumps, says Albert Brandt, general manager of Radiant Water Company in Tulsa, Okla. A 2007 ice storm that disrupted electric service for 14 days prompted many to contemplate their water-preparedness, he said.

“A lot of our customers remember using a hand pump on Grandma’s farm, and now want one as a backup,” Brandt told me when I called to ask about hand pump popularity. Radiant Water Company installs Bison, Hitzer and Baker-Monitor hand pumps.

Brandt, who took over Radiant Water in 1998, remembers a swell in hand pump sales as Y2K neared. Now, after a decade-long calm, people are again preparing for potentially troubling times by making sure their families will have fresh, clean drinking water, even if the grid goes down. Recent advances in hand pump design have made them even easier to use and less expensive, he said.

Stothoff, whose great-grandfather founded the company in 1885, said the company used to install many hand pumps in the then-rural area. Some households still use hand pumps exclusively for water, he said, although such use is rare. Stothoff said he has seen a slight increase in hand pump interest this year, mostly among the self-reliant.

Weather disasters, such as Hurricane Sandy that darkened much of the East Coast for extended periods, spurred more sales for fuel-powered electric generators than for hand pumps, Stothoff said.

Many types of human-powered pumps have been introduced through the years to accommodate the variety of situations and applications encountered when bringing water to the surface. Until now, however, the discharge capacity has been too low for large communities.

In January 2013, Mother Earth News blogger Ed Essex introduced a homemade hand pump machine, now the WaterBuck Pump, to readers. Since then, the pump has been greatly improved, presently exceeding the peak capacity of a 12-foot diameter windmill by 25 percent, making it ideal for remote communities that need more water from deeper water tables or need an irrigation pump with shallow wells.

In a recent WaterBuck Pump test, a 50-something man of average fitness pumped 17.5 gallons in 1 minute from a static level of 80 feet. These results are minimal compared to what can be done with this machine with one or two stronger men or two to four operators and twin cylinders for irrigation, according to the inventor, Darren Holliday. Now because of the design of this high-volume pump, large communities, small farms and developing countries can have the water they need, he said.

Kresten Jensen, III, general manager of Cook Pump Company, who calculated the WaterBuck’s performance recently, said, “Considering how important the commodity produced by the WaterBuck Pump is to sustaining life on this planet, you have created a very powerful piece of equipment.” 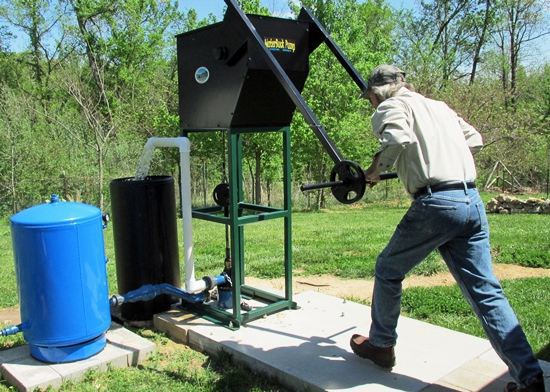 Why Hand Pumps Went to Scrapyards

Because most Americans abandoned hand water pumps more than a generation ago, few today understand how they work or what their limitations are. The pump principle has changed little since its inception, whether for the piston pump invented in 275 BC by Ctesibius, or the rope pump invented in China during the 1st century BC.

Hand pumps were still commonly used in the countryside of the United States and Europe in the 19th century. One pump was usually sufficient to supply water for a family and its livestock. Communities generally took shape around a central well. The people of tiny La Russell, Mo., were so reluctant to give up their community hand pump when progress arrived that they had the new highway paved around it. Residents continue to adorn the old pump with seasonal decorations.

Although hand pumps were scrapped when mechanization and electrification reached rural America, they are still broadly used in Third World countries. Especially where economic resources and fuel sources are sparse, human-powered pumps can significantly improve a water supply system and, consequently, a community’s livelihood.

Hand pump use in the United States is largely for emergency backup, intentionally going off-grid, or even novelty and nostalgia. Meanwhile, in developing nations, human-or animal-powered pumps are vital to survival. Having a manual pump, for instance, significantly increases agricultural yields, provides fast access to drinking water, improves sanitation and empowers women, children and small farmers. 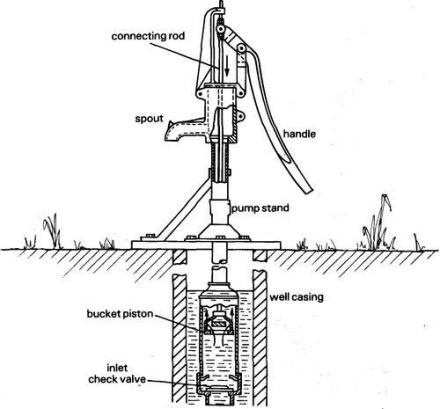 A suction pump, or pitcher pump, is the type we envision on an old homestead. Repeated strokes of the pump handle gradually “suck” water up the riser main and into the cylinder and out the spout. A suction pump’s operational depth is limited to about 26 feet, according to “Water Lifting Devices” by the United Nations Food and Agriculture Organization.

Piston pumps have their pump cylinder below ground and the water table. Instead of sucking well water out, they lift a column of water upward through the riser main. Each consecutive stroke of the pump handle causes the piston to displace more water up the riser until it flows out the spout.

Theoretically, the depth from which a piston pump can remove water is unlimited. In practice, however, the limit is determined by the power a human can exert on the pump handle and the fabrication and materials of the pump cylinder and rod and piston valves and seals.

There is a hand pump for nearly every need. When selecting a hand pump for your home, consider your average daily household use, static (resting) water level, size of well casing (and liner) and whether the pump will be used only in emergencies or every day.

One thought on “Hand Water Pumps Making a Comeback”