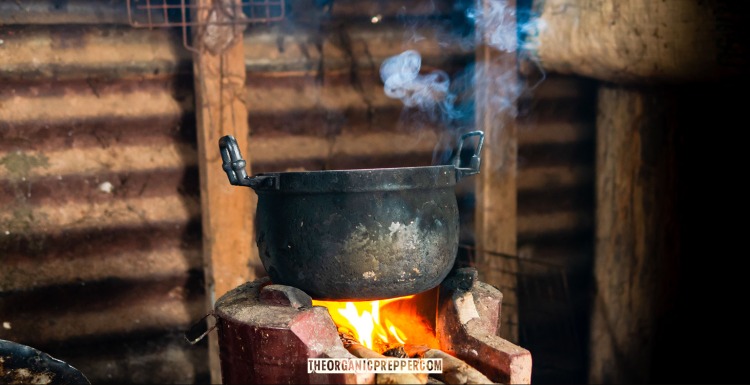 It’s more important now than ever before in recent American history to understand how to live off the grid. And to do this, you need to understand how to make your own power. I’ve lived off the grid for years now, and have had the opportunity to learn what it takes to generate electricity for a house. Today, I’m going to show you exactly how I do it.

Before you guys and gals try and duplicate what I do here in Montana, some words of advice and caution are needed. Know the laws of your area. In Montana, you’re able to not be bothered by others, as long as you don’t live in some municipal area where they impose their rules and codes on you.

In other states, it’s different. You may have to go through endless permits, licensed contractors, and armies of government inspectors.

Know that you have options.

There are numerous methods for obtaining and storing electrical power for your own use.

When I first built my tiny home, I realized that I didn’t need a great deal of power…at least not as much as most homes need because my cabin is only about 800 square feet. Heat for the winter is accomplished entirely with my wood stove.

How I heat my water

With the wood stove, I manage to heat up my water and “pipe” it via copper tubing into a small hot-water storage tank that came out of an old RV. This tank is perched on top of a platform that enables me to shower. The water will stay hot/warm for about an hour. The little RV tank holds about six gallons. I affixed a tiny shower head to the bottom of it. Nothing elaborate: just a basic setup for myself.

How I set up my “reservoir”

As far as electricity is concerned, I tortured myself with “daisy-chaining” standard auto batteries in a series and charging them with some beat-up, rebuilt solar panels and my small windmill. I found that they (the panels) didn’t reach max effectiveness for about six months out of the year due to a lack of sunlight during the winter and fall months. I put up with it for about five years while saving my money to buy a better setup. (Yeah, I’m one of those “weirdos” that won’t buy something unless I can pay for it in full when I do.)

How I set up my solar energy system

I went to shopsolarkits.com for my initial research. I’ve found the staff to be very helpful and knowledgeable when it comes to off-grid power. (No, I don’t get money from them. They are just a good company I like.)

I built a platform for all of them that’s right next to my cabin. It’s worth mentioning that in Montana, you don’t want a roof with shingles unless it’s a “high-peak” house with a steep apex (the Norwegians and Scandinavian countries have built this way for centuries effectively). Barring that design, you want a metal roof, plain and simple. If not, you’d have to climb up top and clear the snow off.

Even with a metal roof, I use a “roof rake” at times when ice and heavy snowfall are combined. Also: the snow has to go somewhere. Most of the winter, I use these big, plastic “toboggans” to haul giant piles of snow away from the house so that I won’t be overwhelmed or encased in a “topless igloo” by the end of the winter…walls of snow that take half of the summer to melt away.

So, the panels are in an open area, and I can easily rotate them to catch the full sun. They work well, and I augment them with my ram.

How I set up my hydroelectric ram

Once again, it’s a tricky issue to be able to use one of these rams. In Montana, you have to have water rights on your property. I’m fortunate enough to have a tributary of a large river that cuts across my property with steep grade drop-offs. This creek doesn’t dry up in the summer or freeze over in the winter. I had been using a “clunker” of a ram that barely enabled me to charge up a couple of car batteries.

About six years ago, during an especially-bad fire season, I woke up one July morning and took my coffee out to the front porch to see more than a hundred head of cattle (103 to be exact) walking across an open field that’s at the edge of my property. After rubbing my eyes, the vision persisted, and I realized they belonged to a neighbor of mine who lived nearby.

I jumped into my truck and headed over to another (my closest) neighbor’s house. He has horses, and I suggested to him that we team up and see about getting the cattle together. He agreed and lent me a horse, and we rode up together to the herd.

This was the first time I had ever herded cattle

He’d done it before, so I followed his lead. We kept it nice and quiet this way: no motor vehicles, and I left my dog at home. After marshaling them together, my friend rode to the owner’s house, and within about five hours, we managed to help the owner and his hands to bring the herd back to his place.

The cows had busted through the fence after being spooked by smoke and (we think) some embers from some small brushfires on the owner’s property. So, my friend and I saved him a lot of grief and money. Just one full-grown cow can be worth thousands of dollars. I had known the rancher and been his friend since I built my cabin. We’d had dinner together many times, and gone fishing together, too. In gratitude, he bought me my new hydroelectric ram, knowing I’d been fighting with the other one for years. He insisted on doing so and bought my friend with the horses a brand-new ATV as well.

The ram he bought me came from ABS Alaskan, Inc., out of Fairbanks, Alaska. It weighs just under a hundred pounds, and it runs all year round, even in the winter months. The tributary that I use has swiftly-moving water with a good natural drop-off to utilize, and I get approximately 1500 watts out of it. They shipped it to the rancher’s house, and he told me he’d bought it all for just under five grand. He and two of his hands helped me set it into the creek behind my house and wire the whole thing up to my battery array. It’s a Scott Hydro Turbine Kit that does multiple outputs (12V, 24 V) for your needs.

How I set up my wind power

As with my first “junko” ram, I struggled with a homemade windmill that I built for several years. I probably would have agonized over it to this day, but a windstorm took it down. A big pine tree had been hit by lightning about three or four years before the windstorm. The winds finished the tree off, and the falling tree finished off my windmill.

Once again, I saved up some money, and I picked up a kit for a 3000-watt wind generator. It throws out 24 V that I store in my array. The kit ran me about $400, and after testing this out for six months, I bought another one to use for my chicken coop. It enables me to power a couple of radiant (space) heaters and some lights for them during the winter months. You can find these kinds of kits anywhere.

It has its own alternator, and the housing is made of aluminum. This is good, especially since the mornings are cold, and the daylight brings on a lot of condensation. Not to mention driving rainstorms and of course, the ever-present snow and ice in the winter. I have a couple of 12 V batteries that I use to run the heaters in the coop and a backup power pack that I always keep continuously charged so that I can plug one of the heaters into if a problem arises. Gotta make sure the “cluckers” keep warm!

So in total, my cabin utilizes four solar panels, two windmills, one hydro-rams, and a wood stove to heat up my shack. No partridges or pear trees in my neck of the woods!

You have to have power, but even it needs a backup plan.

“No man is an island,” and aside from Shoichi Yokoi (the Japanese sergeant who hid on Guadalcanal for 25 years, thinking WWII was not over), even the biggest recluse or hermit will interact with people. I’m no exception to this.

If there’s one thing I wish to bring to you with this article, it’s the importance of helping others out when they need it and doing it with your heart: this is the best power-generator of all.

This doesn’t mean to be foolish. “Vet” them over a period of time, and interact closely with those who have earned your trust. I’d rather lose all of my meager possessions than lose the trust and friendship of my few neighbors. I’d also rather lose it all rather than see any harm come to them or their families.

With no expectations, my friend and I helped our other buddy to get his cattle home, and this man is as generous as he is affluent. He insisted on reciprocating and doing some nice things for us. I’m going over to his house on Sunday, as a matter of fact, to cast some bullets with him and help him do some reloading, and then we’re going to barbeque if the weather holds up.

That’s what real community is about

No matter where you live, you can be this way with others…building friendships with those who are trustworthy and earning their trust as well. Then when things go south, or you have trouble, you can rely on each other. Communism is forced and phony. Community is from the heart, and it’s for real.

If we can bring back the spirit of community? That’s the greatest power source of all. It’s a power that can put the United States right back on her feet and help us build a better future for all of us.

Will any of these ways to make your own power work in your situation? Do you have other suggestions?

Canning And The Four Levels Of Disaster: Are You Prepared?