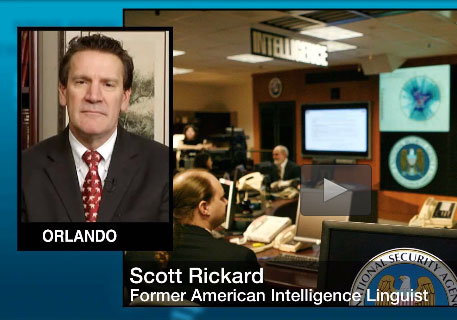 Rickard, who has worked under numerous operations including Signals Intelligence (SIGINT), Communications Security (COMSEC), Open Source Intelligence (OSINT), and Intelligence Surveillance and Reconnaissance (ISR), charged that members of the intelligence community were aware of the attacks before hand, but did not reveal information that could have stopped them, in order to further a “hidden agenda.”

That 3 minute interview can be viewed here.

During an interview with Press TV, Rickard stated:

“I think what we see here is an opportunity for intelligence communities to basically look the other way when targets like those are being active in scenarios [that] would benefit their agenda.”

“I think that there is also a lot of individuals in the intelligence community that have a hidden agenda that allow these types of things to occur.”

Rickard’s statements follow those of former Treasury Dept. official Paul Craig Roberts, who said the story of the attacks “didn’t wash” and had elements of a false flag operation, as well as reports of links between the Paris events and the CIA.

The motivation for allowing the attacks is clear enough – a renewed focus on counter terrorism and mass surveillance efforts. A shocked and outraged world is now prepared to yield more power to the state yet again, under yet another promise of safety and security.

“I think it’s more of a propaganda move, whether or not the actual individuals conducted it or not,” Rickard said.

“Some people in the intelligence community ‘allow’ these guys to commit or be accused of committing these types of activities in order to enable more military and more anti-terrorism activity and create a kind of scenario whereby global leaders are setting up photo-ops in Paris to make it look as if they are combining efforts.”

Scott Rickard, also a technologist and historian who has given TED talks, responded to the claims by Edward Snowden that the Paris attacks resulted, in part, from “too much data.”

Snowden recently claimed that the existing surveillance programs aren’t working because analysts are over-burdened with data:

Edward Snowden is pointing to the recent terrorist attacks in France as evidence that government mass-surveillance programs don’t work because they are “burying people under too much data.”

“When we look at the Paris attacks specifically, we see that France passed one of the most intrusive, expansive surveillance laws in all of Europe last year, and it didn’t stop the attack,” the fugitive leaker said in an interview with NOS, a Dutch news organization, released Wednesday. “And this is consistent with what we’ve seen in every country.”

“When you look at the United States, the Patriot Act, the mass surveillance that’s been debated and criticized since 2013, the White House did two independent investigations into its effectiveness and found that despite monitoring the phone calls for everyone in the United States every time they pick up the phone, it hadn’t stopped a single attack,” Snowden said in his NOS interview.

“Individuals in the intelligence community are very focused on their targets and I think one of the things that Edward Snowden misses is that there is an opportunity to focus on individuals, like the individuals that were basically accused of the attacks in Paris earlier this month,” he said.

According to Rickard, it isn’t that ‘too much data’ prevented the watchers from catching the accused terrorists, but rather that they turned a blind eye to let things play out.
Problem-reaction-solution.
In other words, it is quite clear that the attacks were in the interests of the system for propaganda purposes, and to pursue the surveillance and security agenda.
As Press TV noted, the same (and worse) has happened in other high profile terror cases, including the very damning case of the “Underwear Bomber”:

He mentioned the case of Umar Farouk Abdulmutallab, the so-called underwear bomber, who was convicted of attempting to blow up a Detroit-bound flight on the 2009 Christmas Day, using explosives hidden in his underwear.

Rickard said US intelligence knew of the plot but allowed the bomber to proceed with his plan.

“This was another example whereby the US and western intelligence had great amount of information about the movements and the whereabouts of Abdulmutallab and they even helped him get through the airport in Amsterdam on his way to the United States to do the underwear bombing,” he said.

“So I think we are seeing a façade of actual truth in the matter of this attack whereby I think there may be an opportunity to pull back the curtains and see that the intelligence community knew a lot more about these guys.”

The truth, quite simply, has nothing to do with what was reported to the public. The truth, if you let it settle in, should be quite unnerving – because of what it reveals about those in power, and the lengths they will go to in order to ‘keep us safe and security’ – under a police state with close monitoring and sharply curtailed liberties. 9/11 all over again.