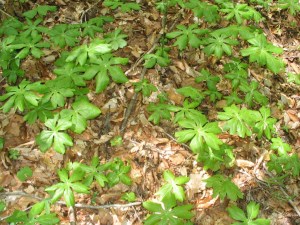 Mayapple fruits are ripe when they are as yellow as a lemon, and are soft and slightly wrinkled. Their ripening time usually occurs somewhere between mid-July and September.

It’s amazing how learning to wild forage opens your eyes to a whole new world beneath your feet. It’s like plants that I’ve never seen in my life are suddenly all around me, and I’m constantly learning of their uses and medicinal value.

This past April I noticed that the forest floor sprung forth with thousands of funny, umbrella-shaped plants. What were they?? I scoured my foraging books, but not one of them had anything that looked remotely similar. It was only after an exhaustive search of the internet that I finally came across the answer I was seeking: They’re Mayapples.

This was exciting to discover, because not only are they cool to look at, they produce an edible fruit as well!

From above, Mayapples look like a leaf just popping out of the ground. Some of them have four lobes, some have six, seven and eight lobes.

They also come in different patterns. I noticed that while most of them were solid green, a few with dark splotches scattered the woodsy area they inhabited.

If you crouch down and look underneath the foliage, you’ll find that Mayapples grow on a smooth, slender stem. Female plants have two leaves per plant, while males have a single leaf atop. Female plants will produce a white flower, which later turns into a delicious yellow fruit.

You must use caution though! Mayapple plants are extremely poisonous. Unripe fruit is also poisonous, so do not attempt to eat either the plant or an unripe fruit. As a matter of fact, reportedly Native Americans used Mayapples to commit suicide, so be careful.

Mayapple fruits are ripe when they are as yellow as a lemon, and are soft and slightly wrinkled. Their ripening time usually occurs somewhere between mid-July and September. The plant will die back, leaving nothing but a stem and a dangling fruit, which makes them harder to find in the late Summer months, so scout them out early.

A couple of other precautions:

Mayapples can be eaten fresh, juiced, cooked into jelly and marmalade, made into pies, and turned into a sauce (like applesauce). Just be sure to scrape out the seeds before cooking/consuming. (Scatter the seeds in the forest for another crop of Mayapples next year!)

This morning I took a walk down to where one of our Mayapples grows to check on the fruit. It’s mid-July and the fruit is still green and hard. I’ve been told by an expert forager that ripe Mayapples are hard to get your hands on, as all of the woodland creatures are waiting for it to ripen as well. I need to build a chicken-wire covering to put over the top of at least one of the plants so that I might have a chance to taste one.

As always, be sure to do your own research on wild edibles before consuming them or using them for medicinal purposes. And be 100% sure you have properly identified a plant; it can be easy to mistake one for a dangerous look-alike. If you’re nervous about foraging, start with something easy like wild strawberries, which have no poisonous look-alikes. It would be such a shame to starve in the woods surrounded by foods you didn’t even know were there. Learn to forage! But do so responsibly.

4 Ways To Use Willow Bark and How To Harvest It

Grid Down: How to Get Water From Your Well When There is No Power

Live-Off-The-Land with These 7 Summer Survival Foods