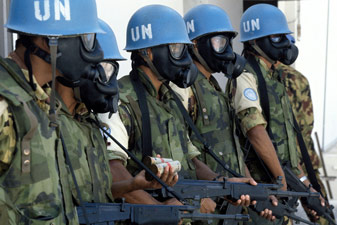 In times of crises, the government has proven, time and time again, that it cannot be counted on to adequately protect the American people. As the American people have not prepared for the coming dark days, they will be vulnerable to starvation, dehydration, cholera, pandemics and attacks from resource-deficient looters. Will the government be there to save them? History has already answered this question in the negative. Events such as Hurricane Katrina, Hurricane Sandy, L.A. riots and the Ferguson riots have repeatedly demonstrated that when trouble comes, the American people will be on their own.

When disaster strikes, it will take less than 24 hours until grocery stores are empty, the utilities are down and neighbors begin to prey upon neighbors.

Certainly, no government can be all things to all people. Subsequently, the government should be in the business of encouraging its citizens to be independent. However, the Obama administration has taken the opposite approach. Instead of the government empowering the people to be self-sufficient, this administration is punishing independence and self sufficiency.

DHS actually published a “Right Wing Extremism Manual which demonizes and targets normal citizens with labels such as “preppers” and have further defined the act of becoming self-sufficient as being the actions of a domestic terrorist. It is ironic that DHS is the one who has ordered millions of FEMA caskets, 2700 armored personnel carriers and 2.2 billion rounds of ammunition. Yet, it is only the wholly independent people, only desiring to be left alone by their government, are labeled as domestic terrorists.

America Is Witnessing the Manifestation of Agenda 21

Any aware person knows that Agenda 21 is predicated on eliminating private property ownership and keeping all people within the “system”. Drinking raw milk, engaging in off the grid living and heating your home with a wood stove is forbidden. All of these prohibitions and more are presently encircling America as the Agenda 21 noose is tightening around collective necks.

Many unaware Americans still mistakenly believe that they have dominion over their lives and personal choices. These same people mistakenly believe that the government does not care if you want to live independently of their corporate cronies who own the utilities. They want you in their system so they can continue to exploit your resources for their benefit. Take the case of Robin Speronis who tried opting for renewable non-grid tied power and utilize environmentally friendly composting toilets and his own self-sufficient water supply. If one commits these acts in Florida, that person could go to jail.

Speronis lived off the grid, independent of Cape Coral’s (Florida) water and electric utilities. Not to be denied the revenue to them owed the subjects of Florida, the utilities took Speronis to court and the judge ruled this off-the-grid living was illegal last week . The judge labeled the Speronis home as being “unsanitary” and cited the International Property Maintenance Code in the ruling. Wikipedia further exposes the fact that the International Property Maintenance Code derives its authority from Agenda 21 and ICLEI and that this “regulation” bootstraps its authority into the following domains.

Subsequently, we have an American judge, in Florida, citing UN mandate to forcibly evict an American citizen of their property and nullify their Fifth Amendment Rights. Speronis also faces jail time for noncompliance with international law.

If you read nothing else in this article, I strongly suggest you heed this warning. In two years, local and state governments will have the ability to begin to seize individual property for the failure to meet code, usually in the area of energy efficiency and international code compliance. In the near future if one cannot meet the burden of upgrading their older homes into meeting the standards related energy compliance, by United Nations standards, one could have their home confiscated without any compensation.

The latest round of Agenda 21 insanity is coming from the Environmental Protection Agency (EPA). The EPA has recently imposed new heating rules as of last year and the date of enforcement has long last arrived. The insane application of Agenda 21 policies knows no bounds when it comes to the EPA. Also under the auspices of the International Property Maintenance Code, the EPA has introduced new standards for wood stoves which dramatically reduces the amount of fine particle emissions for any wood stove sold in 2015. The emissions must be reduced by 33% with more reductions scheduled for 2019.

At issue is the unsubstantiated claim that the EPA is making that if the use of wood stoves are reduced, the health of the residents will increase. Yet, the EPA does not offer any peer-reviewed research, which has been replicated, as proof of this bogus claim. Are we just supposed to take their word for it? We might as well face the fact that the EPA is controlled by ICLEI and their United Nations puppet masters.

Who Are the Real Terrorists?

We are under attack from the skies and through the poisoning of our air through massive chemical spraying complete with Alzheimer’s and dementia causing aluminum sulfate and cancer causing barium. Fukushima radiation, Corexit spraying and the resulting toxic rain from the Gulf oil spill is running rampant over our country and not one ounce of mainstream media coverage is afforded to these dangers. Prevention and remediation from these dangers, caused by governmental indifference or complicity, are not put into place by our present government.

Americans are now in the midst of being subjected to the death panels of Obama care in which citizens over the age of 70 are officially referred to as “units” and are targeted for comfort care but not given life saving measures. Under these conditions is it really in our best interest to remain “in the system”?

This is an undeniable, unmitigated and naked version of Eugenics cast in the same flavor as that practiced by Margaret Sanger, Joseph Stalin and Adolph Hitler and when Americans try to extricate themselves from these assaults upon their liberties and their health, they are increasingly marginalized, and prosecuted.

Who’s the real terrorist here? Why is the Obama administration embracing international mandates which criminalizes independent behavior and choices in violation of our Fifth Amendment rights?

If you have the courage to really answer these questions, I would suggest you dig into world history and read about the Holodomor and discover the real motivation behind forced compliance which results in total dependence on the government for life-sustaining services should become readily apparent.

The US Gov. Agrees to a UN Military Takeover In the Event of Civil Unrest on American Soil